As the number of books on investing in gold continues to proliferate, Shayne McGuire’s Hard Money: Taking Gold to a Higher Investment Level (Wiley, 2010) stands out in several ways. Most importantly, the author methodically builds a case for gold by analyzing five drivers of potential price appreciation. They are: the increasing likelihood of fiscal crises in major economies of the world, the return of inflation, a small allocation shift into gold by institutional funds, the rise of China, and gold’s potential return to being the dominant financial asset in the global monetary system. 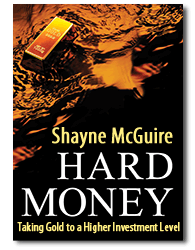 In the second part of the book McGuire describes in some detail the kinds of elements that might be included in a precious metals portfolio as a subset of an overall portfolio—stocks, ETFs, physical metals. He explains how to buy coins, including rare coins. All in all, a good practical guide for the investor.

Here are a couple of points that struck me as worth sharing.

McGuire argues that gold can be viewed as the “youngest major investment asset class” because “it is only since the early 1970s that it started being broadly perceived as an investment.” Before the collapse of the Bretton Woods monetary system in 1971, gold was money; currencies were “receipts that represented and were exchangeable for hard money.” Therefore it makes no sense to evaluate gold as an investment prior to the 1970s. As McGuire writes, “Evaluating it as an investment over this time period would be like examining the return on investment of a dollar bill: Both moved in lockstep by government decree.” (pp. 68-69) Yes, gold would rise in value in response to an economic shock, often triggered by war. But “even during these periods of financial stress, nobody was investing in gold. People were hiding in and accumulating savings in gold, the way they hide in cash to move away from volatile financial markets and keep savings accounts in dollars today. In the past, investing generally involved taking risks by moving away from gold, which was always seen as money. Today is the opposite. For any fund manager, buying gold today means investing, taking risk.” (p. 69)Although McGuire contemplates the possibility of $10K gold, he warns the reader of the genuine economic concerns that underlie allegations of gold market manipulation by financial authorities. The problem for financial authorities is that “a gold investment wave can suck resources out of the broader economy,” especially bonds, resulting in a spike in interest rates, “and ultimately deflation and another banking system crisis.” (p. 85) We have only to think back to 1933 and FDR’s confiscation of gold.One final cautionary note from the author. He writes: “Although there are reasons why a gold boom could endure for some time, I think a gold portfolio is something that I, personally, would not maintain as a permanent portfolio in my overall diversified portfolio of assets. I think of it as a portfolio to be maintained in these extraordinary times….” (p. 145)

Brenda Jubin
466 Followers
Brenda Jubin is an independent trader and investor with an academic and business background. She taught philosophy at Yale and was dean of Morse College, one of Yale's twelve undergraduate residential colleges. She then founded Brevis Press, a company specializing in academic press book production. Throughout she invested in stocks and mutual funds. She has now settled into the life of a full-time trader and investor. She also writes the blog Reading the Markets (http://www.readingthemarkets.blogspot.com).
Follow