As we move into 2011, economists increasingly believe that the United States and Europe will start to see an economic rebound, joining China, Brazil, India and other emerging economies in a full-fledged global economic upturn. A closer look at recent price action in the crude oil markets underscores a risk that rising economic activity brings -- and an opportunity for investors... 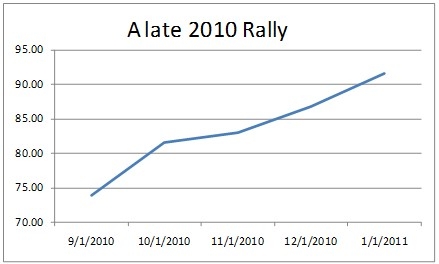 Just as when oil prices moved below $40 a barrel when the economy hit the skids a few years ago, the price reflected a sense that demand for oil would collapse in the face of an even deeper economic meltdown. But it also created some clear winners and losers.

When it became apparent that no such cataclysm would emerge, oil prices rebounded back to the $50-75 range, reflecting a global economy that was lukewarm. That set the stage for a reversal of winners and losers as oil approaches $100 a barrel (more on that in a bit). 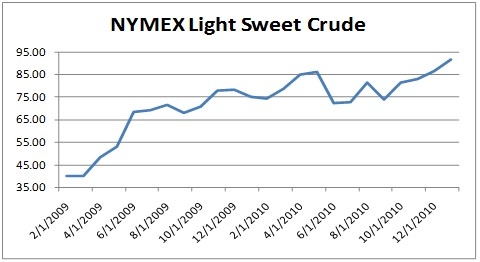 Like the proverbial frog in the boiling pot of water, rising oil prices are already starting to impact the economy in various subtle ways.

In the last six months, economists have regularly suggested that rising oil prices should be no cause for concern. When oil was at $50, they figured that $70 oil was tolerable. And at $70, they figured that $90 oil could still be tolerated. But an increasing number of economists predict we'll see $100 oil this winter and $110 oil later this year, and that argument can last only so long in the face of rising prices. The concern came home to roost this weekend when it was announced that a leaking pipeline would lead to sharply diminished flows of oil coming from Alaska, which may push prices up to that $100 mark fairly quickly. How long the pipeline remains off-line will determine how much oil prices will be affected.

Airline stocks have been great investments for the last two years. The AMEX Airline Index [AMEX: XAL] has surged from $14 to $48 in just 20 months. That rally now appears to be ending, with oil prices rising. The index has tried to push past the $50 mark twice, only to be rebuffed. The index was off for the third straight session on Monday and may well drop lower as we head into earnings season.

The major carriers are set to update their fuel cost projections for 2011, and sadly, most carriers neglected to hedge oil prices when they were lower. Look for analysts to start gradually cutting profit forecasts as they begin to question whether ever higher ticket prices (to offset those fuel cost spikes) will start to crimp demand for air travel.

I remain a fan of United Continental (NYSE: UAL), thanks to ongoing cost cuts after the two carriers merged. I'm most bearish on the prospects for AMR (NYSE: AMR), parent of American Airlines, as that carrier operates the most dated and inefficient fleet.

I'm also increasingly concerned about chemical manufacturers that consume a great deal of petroleum in their industrial processes. Dow Chemical (NYSE: DOW), for example, has been in the midst of a profit boom, thanks to benign oil prices. As that tailwind becomes a headwind, profits may approach a cyclical peak. Shares trade for roughly 20 times likely 2010 profits and 15 times likely 2011 profits. Those are fairly rich multiples for a cyclical stock if we are indeed reaching a peak.

Oil producers are the obvious beneficiary of a spike in prices. I recently suggested that SandRidge Energy (NYSE: SD) should benefit from steadily increasing exposure to oil exploration. Shares have moved up more than 20% since I profiled SandRidge last month, but I see another 25% to 30% upward move in coming months as investors digest the impact of rising oil prices.

You may also want to check out Devon Energy (NYSE: DVN). The company wisely sold $8 billion in natural gas assets during the past few years to increase its exposure to oil. Meanwhile, some of the proceeds from those asset sales are going toward a large debt pay-down and an equally large stock buyback.

Lastly, if oil moves above $100 and stays there for awhile, clean energy stocks will move back into vogue. The PowerShares WilderHill Clean Energy ETF (NYSE: PBW) which surged above $25 briefly in early 2008 now trades below $10, reflecting the recent period of relatively cheap fossil fuels. LDK Solar (NYSE: LDK) remains a favored play I've profiled in the solar sector after cleaning up its balance sheet.

Shares of American Superconductor (Nasdaq: AMSC) is off more than 30% from its 52-week high and now trades below $30, but the company's exposure to the global wind power industry could push shares back up toward the $40 mark if rising oil creates further momentum for government support of wind power. Notably, wind power would be competitive with oil moving above $110, so government support may not even be necessary.

As the U.S. economy starts to strengthen, it's hard to see how oil prices can stay down. The challenge for investors is to lighten exposure to the "loser" companies and industries I identified above that would be most severely impacted by rising oil prices. At the same time, you'll want to increase your exposure to companies and industries like the "winners" I've identified as well.

Disclosure: Neither David Sterman nor StreetAuthority, LLC hold positions in any securities mentioned in this article.

StreetAuthority
3.96K Followers
Our mission is to help individual investors earn profits by providing a source of independent, unbiased and profitable investing ideas. StreetAuthority provides in-depth research, plus specific investment ideas and immediate action to take based on the latest market events. We accomplish this via one of the most popular financial web sites in the nation, StreetAuthority.com, and by publishing over a dozen widely-followed financial newsletters with a total of more than a million subscribers. Follow us on Twitter: @StreetAuthority