Ryan Avent gets puzzled as he tries to work his way through the causes of unemployment.

What we see is a two-track labour market. Workers who never lost their jobs... have potentially enjoyed pay increases. But... jobless workers... have struggled to find work and who can generally only do so at a significant wage cut relative to their previous pay.... I mentioned a few explanations ventured by Rob Shimer....

One big issue is the problem that nominal wages aren't very flexible in a downward direction. Another issue could be that since existing firms aren't motivated to hire new and cheap workers, new firms are needed to absorb jobless workers, but new firm creation is hampered by tight credit conditions. Mr Shimer also speculated that unemployed workers could somehow be different—uniquely unskilled or improperly skilled—or they could be pinned in place by housing conditions in particularly bad job markets....

Why wouldn't firms swap out older, more expensive workers for the cheaper unemployed ones available to them? One possibility is that firms are worried about the disruptive impact of such workforce turnover and have decided that it's better to keep employing existing labour at existing wages...

The answer is, as Ryan points out, that the currently-unemployed need new or expanding firms to hire them, and:

Or it could be that jobless workers are simply much less productive than those who continue to work.... But... why [did] firms [have] them on payrolls before the recession[?]... The data seem not to point toward structural factors as the primary driver of unemployment.

Perhaps the problem is a shortfall in demand, which is preventing existing firms from expanding. It could be that the real interest rate simply isn't low enough to induce firms to invest in new plants and equipment--investments that would produce corresponding jobs. 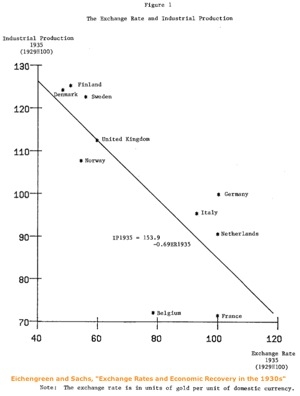 It is at this point that Ryan should have noted that nominal demand is now 8% below its pre-2008 trend.

Surely if something were to suddenly and quickly without harming worker morale reduce the level of nominal wages by 8%--so that real demand were back at its trend--we would magically discover that all those "low-productivity" workers were very employable.

Well lo and behold, that is how it worked in the Great Depression. Exchange rate depreciation is--if you are a small open economy--an extremely easy way of reducing your nominal wages in world prices without harming worker morale.

Could there possibly be any reason to think that things are working any differently today?