Since initially posting our short thesis on Papa Murphy's Holdings (NASDAQ:FRSH-OLD) ("Papa Murphy", "FRSH", or the "Company") this past May, the short thesis has become increasingly compelling. One of the key drivers to the short thesis is the lack of franchisee profitability and accelerated closures/issues outside of the Pacific Northwest, which should ultimately lead to significantly reduced expectations as the perception of the Company rotates from that of a growing fast-casual chain (for which it is not) to that of a mature chain.

We re-iterate our short thesis, as there are two near-term catalysts which will potentially cause the equity to re-rate to our "super-optimistic" price target of ~$5 per share or roughly 40% upside to the short thesis. Two potential near-term catalysts include a potential sponsor exit (hence the sell-side bullishness) through a secondary sale and EBITDA pressure derived from franchisee issues and royalty relief expanded upon below.

Key highlights and updates since the most recent quarter are as follows:

In reaction to the two franchisee lawsuits and lack of growth as expected, FRSH is waiving royalty fees in order to attract new franchisees. This is a strong positive for the short thesis, as sell-side estimates are completely ignoring royalty relief, the effect on future growth and the overall health of the franchise system. Reiterate our short, with a target price of ~$5.0 - $6.0 per share.

For reference, please see the most recently updated financial results: 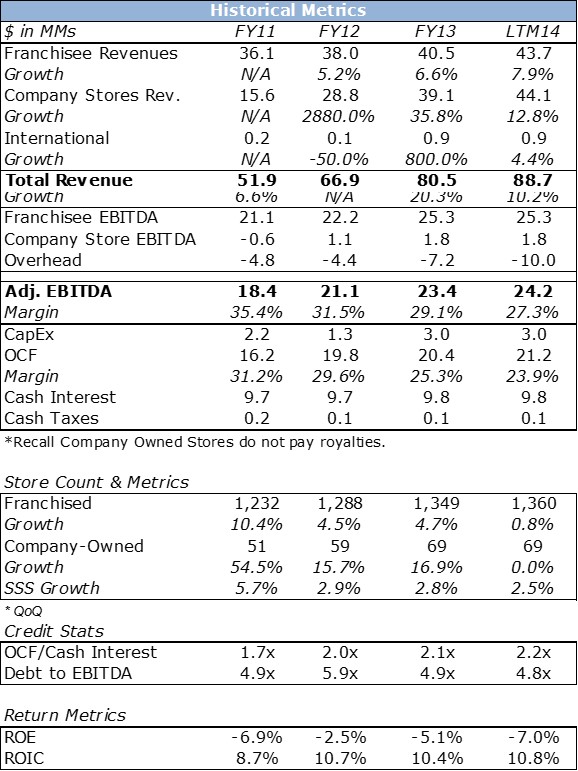 The thesis is predicated on the following attributes, which make the Company a highly attractive short at current prices:

If FRSH wants to achieve their store growth goal, they will need to improve franchisee performance in the geographies they want to penetrate. One method would be through advertising spend, which would depress free cash flow and EBITDA, which isn't ideal for a business with a poor balance sheet and little levered free cash flow generation. As mentioned above, a second lawsuit was filed.

Sell-side analysts and "growth" investors have been enamored by Papa Murphy's, as the consensus bull thesis has been predicated on:

Rebuttal: SSS growth over the last two years was sub-3%, inclusive of numerous promotional items which were detrimental to franchisees. Key drivers to SSS such as SNAP and the ability to be excluded from sales taxes, has also recently come under pressure.

Recall another driver of SSS growth is derived from Company owned stores, whose SSS comps are 2x franchisee SSS, not a positive when attempting to aggressively sign new franchisees. Moreover, company-owned stores do not pay the 5% royalty fee, implying poor bottom line performance when adjusted. In the near term, the Company will be facing an uphill battle for SSS comps due to $5 faves in addition to other promotional items from FY13. At the end of the day, free cash flow and the bottom line determine if a business will stay in existence and maintain creditworthiness, not SSS.

Rebuttal: The bulls tend to drastically overlook or ignore the issues and concerns with the PMFA and the effect of the recent lawsuit, which suggests new territories are highly unprofitable, and are generating below break-even AWS.

Rebuttal: The sell-side is only considering competition from other QSR pizza chains (which there are plenty with larger wallet share) along with new interesting true fast casual concepts like Blaze Pizza. The bulls are overlooking competition from super-market freshly prepared pizzas and importantly cheaper frozen pizzas such as DiGiorno.

Rebuttal: The sell-side is even projecting tepid FCF generation ranging from $4MM (2.5%) to $8MM (inclusive of stock-based comp, a real expense for shareholders) in FY16 (5%). The repercussions are clearly negative as the Company will not be able to pay-down its tremendous debt burden with its projected FCF - magnifying the Company's reliance on the capital markets as an "out", not considering a restructuring of some sort.

The base case portrays a scenario of top line growth and gradual margin improvement. Below are the assumptions used in the base case scenario:

The upside case portrays a strong five-year forecast for the Company. When compared with the base case management's plan forecasts. Below are the assumptions used in the upside case scenario:

The stress case portrays a realistic case where margin expansion is not assumed due to weak performance in franchisee growth areas (subsidized by marketing spend), and sales mix with company owned stores. Below are the assumptions used in the stress case scenario:

Free Cash Flow to the Firm ("FCFF") was one method used to determine the intrinsic value for all three cases. The Company's terminal value was calculating using both the perpetuity growth and EBITDA exit multiple methods, 1.0% and 8.0x, respectively, for the base case, 1.5% and 11.0x for the upside case, and 1.0% and 6.0x for the stress case.

In the LBO auction held in 2010, Pap Murphy's was purchased for ~9.5x EBITDA. As shown below, a 9.5x LTM multiple would indicate a price of $6.9 per share (loss of 35%). Given the franchise issues denoted above, the business could trade for less than 9.5x. The following chart quantifies the range of hypothetical valuation outcomes:

Why the Consensus is Wrong / Recommendation

The short thesis in regards to Papa Murphy is fairly simple, as the Company is being touted as a fast-growing differentiated pizza concept with tremendous white space, while in reality FRSH is a levered, mature regional concept with low barriers to entry, with an intrinsic value materially lower than the current price.

Additional disclosure: Please consult your financial, legal, and/or tax advisors before making any investment decisions. While the Author has tried to present facts it believes are accurate, the Author makes no representation as to the accuracy or completeness of any information contained in this note. The reader agrees not to invest based on this note, and to perform his or her own due diligence and research before taking a long or short position in FRSH. Reader agrees to hold author harmless and hereby waives any causes of action against author related to the note above.