"If you want to be an amazing systematic trader, it is essential to view yourself as an advanced life form from another planet who was sent to Earth to observe and to chronicle systematic human foibles. Quite literally, you have to view people as unfortunate beings who make constant logical and mathematical errors in judgment. Your job is to exploit their systematic mistakes in how they process information.

Lest you think this is too easy, remember that while it is very fashionable for humans to constantly comment upon how illogical, dumb, and predictable other humans are, that most people are unable to profit from the misjudgment, pettiness, and emotionalism they are constantly confronted with. Unfortunately, most humans only suffer from their fellow humans' stupidity, and with grave consequences, ranging from the seriousness of war and peace, to the horrors of genocide and starvation, to the banality of infidelity."

When I wrote those words last year, I knew that I was revealing a massive market inefficiency between the volatility and fixed income markets. However, I had no idea how popular the strategy would become. Nor did I fully appreciate the endurance and the persistence of the structural mispricing between these markets.

YTD, the strategy is up almost 52%. To review, the rules are:

II. Buy TMF (TMF) with 60% of the dollar value of the portfolio.

III. Rebalance weekly to maintain the 40%/ 60% dollar value split between the positions. 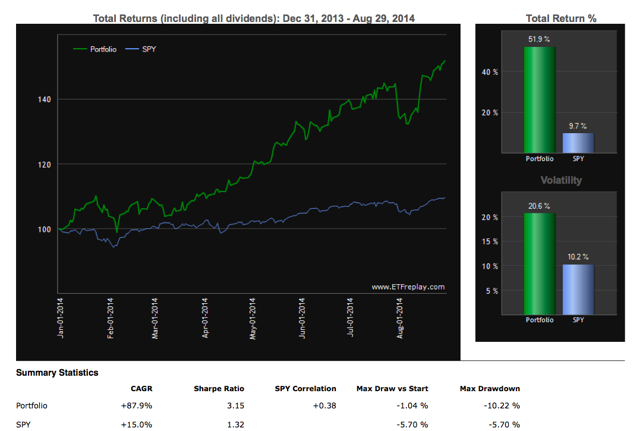 For an overview of performance since both instruments existed, the chart below is instructive: 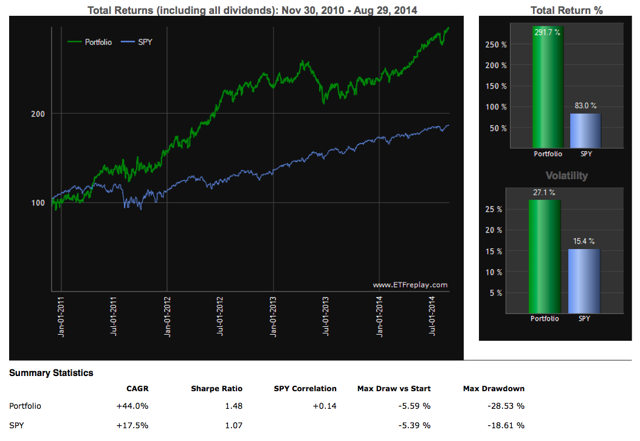 I personally only use the far more advanced, non-public version of Structural Arbitrage, because of the possibility that both volatility and bond markets could collapse simultaneously in a stagflation-like scenario which would decimate the public version of this strategy, as I have stated again and again.

As I warned, our public strategy-based indices have crushed the performance of the S&P 500, but instead, I am worried. As a quantitative researcher and trader, that's my job--to be worried about potential risks, even when things are going well. It's always the events that have not yet occurred in any backtest, but are yet to come, that kill participants in the financial markets.

Our safer, more complex, strategy-based indices, are for clients. Think of our elegantly simple Structural Arbitrage and Hedged Convexity Capture indices as proofs of concept, like test bed aircraft, rather than planes designed for the rigors of combat.

Each index is designed to explicate one inefficiency--not to withstand every potential future obstacle lurking in the financial markets. It's important that readers understand that. Once the indices are viewed in this light, readers can stop expecting them to be an investment panacea. Rather, they should be viewed as potentially fruitful starting points for further investigation in the financial markets.

I apologize for repeating almost verbatim my admonition for investors to take profits and close out their positions in the public versions of these strategies. But I continue to hear from investors who have made massive profits using our public strategy-indices who refuse to take their profits as I have publicly implored and have refused to research additional ways of hedging.

Remember, our publicly-released version of Structural Arbitrage should be a starting points for further investigation of macro inefficiencies in the financial markets. It should not be the ending point. Even if readers believe that Structural Arbitrage is the best publicly-released strategy they have ever examined, it does not mean that the strategy could not be massively improved, as we have done.