Here are some of the Q2 earnings highlights (see the Press Release for the full list):

While Yandex's search engine business has been growing steadily over the past several quarters, the company's stock has dropped substantially (like many other Russian stocks) since early 2014 because of the Ukraine Crisis (see image below). 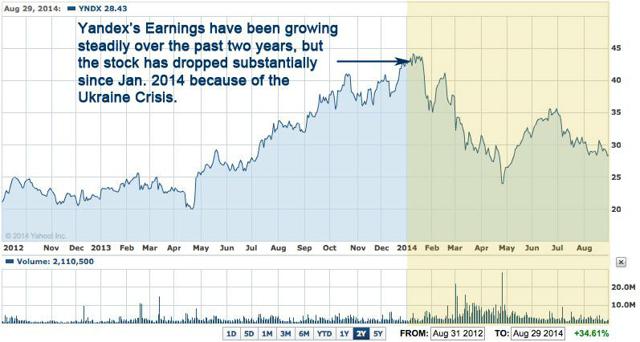 For those who like to invest in great companies for the long term, I believe that there are two important questions we should consider:

I will address both questions in this article and share my perspective on Yandex's long-term prospects.

First of all, when I analyze stocks, I like to look at them as businesses instead of stock certificates because in reality, they represent partial ownership of companies. 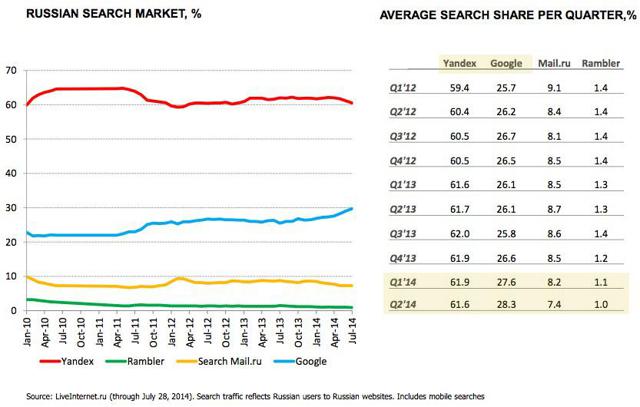 Yandex's primary competitor is Google, which has been gaining market share from Mail.ru (Russia's largest internet portal and email service) and Rambler. Sputnik is another notable competitor. It is a state-owned search engine that was launched in May this year in order to rival Yandex and Google. Despite the increasing competition, I believe that Yandex will continue to dominate in the Russian search market because it has the best search technologies and because it is already well adopted by the majority of people in Russia. Yandex's popularity and dominance in Russia is similar to Google's domination in most of the world-with the exception of China, where Baidu (BIDU) is the most dominant.

Yandex's search business has also been quite resilient during the Ukraine Crisis and the current economic sanctions against Russia that could lead the country to a recession. For example, the company's number of advertisers has been growing steadily at a decelerating rate since Q2 2012 (see image below). The company's revenues have also been growing steadily since Q2 2012 because of the increasing search queries by users and the increasing text-based advertising that match user queries, website content and user behaviors (this is similar to Google's contextual, text-based and cost-per-click advertising). 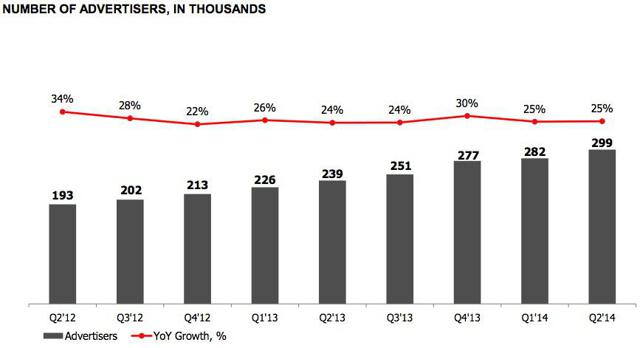 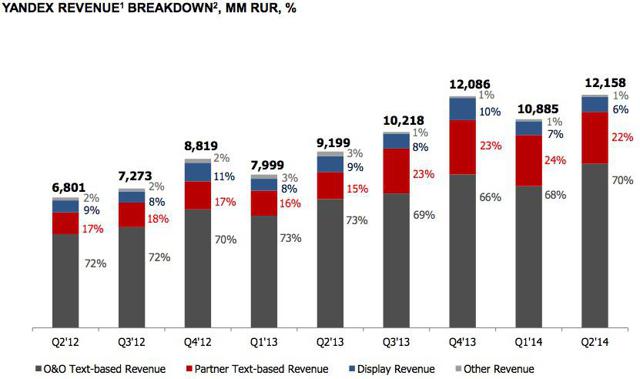 Over the next decade, I believe that Yandex's search business will continue to grow steadily because the online advertising market in Russia is still in the early growth stage and because more users are using internet search engines such as Yandex to search for content and to advertise their businesses. Hence, I believe that the company's revenue should grow at an average annual growth rate of 15% to 30% over the next five to ten years. In comparison, management expects that the company will achieve a full-year ruble-based revenue growth of 25% to 30% in 2014 (source:Press Release).

The Russian Trading System Index (RTSI) has been impacted by the Ukraine Crisis and has dropped -15.3% since the beginning of the year. Yandex's stock has also been impacted even though the company's business has been growing steadily during the same period. Russian stocks, including Yandex, may not perform well in the short term until the Ukraine Crisis eases. However, in the long run, I believe that Yandex's stock will eventually recover because of the company's increasing revenues, earnings and free cash flows.

President Poroshenko recently dissolved the Ukraine parliament. More importantly, he called for early elections on October 26 in order to have new members who can better represent Ukrainians. At the same time, many people suspect that Russia is planning to annex eastern Ukraine that is largely pro-Russian like Crimea (western Ukraine is largely pro-European). While I do not know the outcome of the upcoming elections, I believe that the Ukraine Crisis will eventually be resolved, which should lead Yandex as well as other Russian stocks to recover from their past twelve months' historical lows.

I believe that Yandex's stock will eventually recover when the Ukraine Crisis eases or is resolved. The company's search business is quite resilient to the political conditions in Russia. More importantly, its search business has the largest market share in Russia and is growing with increasing revenues, user queries, advertisers and traffic. Hence, I believe that Yandex is still a great long-term investment­ even though the stock may not perform well in the short term because of the Ukraine Crisis.

The article was originally published on Intelligent Stocks on September 2.

Value Growth Investor
434 Followers
My investment strategy is to always invest in the best companies that have increasing economic prospects and increasing economic moats. I always concentrate my investments on the best companies that have the best business prospects (mainly tech companies in my portfolio). According to Buffett, he said “Diversification is protection against ignorance. It makes little sense if you know what you are doing.”My investments are “Apple, Amazon, Google, Facebook, Microsoft, MasterCard, Visa, Paypal, Alibaba, Tencent Holdings, Nvidia, AMD, Netflix, Tesla, Sea Limited, SalesForce, Snowflake, Adobe, Shopify, MercadoLibre.”