To say that the world is currently rife with geopolitical turmoil and economic uncertainty would be an understatement. Such periods usually mean a rough ride for risky assets as investors shift their capital to safer havens until the storms subside. But these are not normal times. Emerging market securities are often the first to experience a pullback, yet the broad MSCI Emerging Markets Index has gained 8.5% YTD after having spent 2013 in the red. 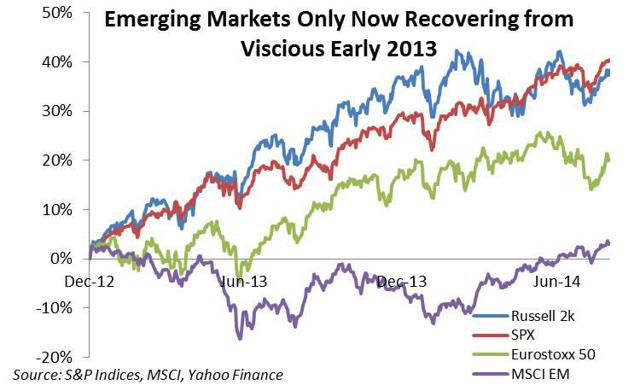 There are myriad explanations for the rebound in emerging market (EM) indices this year. Some are due to bullish fundamentals in specific countries. Yet one cannot ignore that in a yield-starved environment, investors are clamoring for any security that portends to offer an attractive return. Such demand-driven rallies - we call them bubbles - have a tendency to disregard fundamentals, which obscures truly attractive destinations for one's capital and enables pretenders to take a seat at the global financial markets table. Ironically, this overly-bullish, top-down approach (which has more-than-once been in favor during the past decade) is occurring at a time when heretofore major emerging economies are running into stiff economic headwinds, backsliding on market-friendly reforms, or in the case of Russia, putting geopolitical arrogance ahead of economic development and further integration into the global marketplace. I hope trendy Muscovites have not lost their palate for canned beets and boiled potatoes.

Even during the EM sell-off of early 2013, we stood by our favorable stance on select developing countries that truly have their acts together. While it may seem a more arduous task to perform the necessary granular analysis to identify truly attractive regions, much less securities, one can argue that the job of EM investing has been simplified as many countries, through ham-fisted policies and slowing growth, have removed themselves from the pool of potential investment destinations. 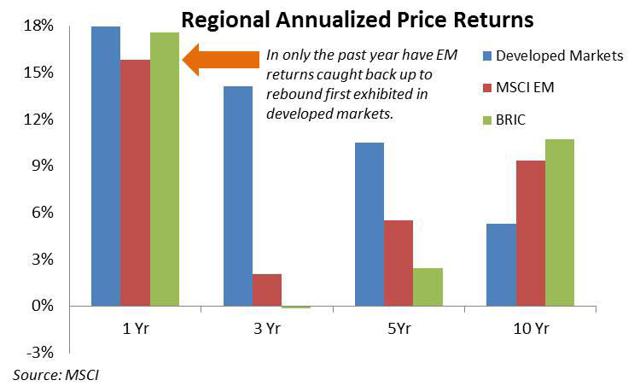 This is not the first time investors have risked painting all emerging markets with the same broad and rosy brush strokes. Yet during the early years of last decade's EM rally, much of the optimism was fueled by favorable developments in previously low-income countries. Key among these were economic liberalization, integration into the global economy and financial market reforms, which improved transparency, liquidity and investor rights, all of which had previously been the bane of earlier generations of EM investors. Perhaps even more important were many of these countries' favorable demographics, which as we know from our school days, determine many a key historical trend. Massive rural populations moving into urban centers not only meant cheap labor for global manufacturers, but also solid growth in personal consumption as these populations ascended into the middle classes. Other favorable themes included rising productivity across these economies and the introduction of modern banking products, enabling managers to fund expansion and optimize balance sheets. 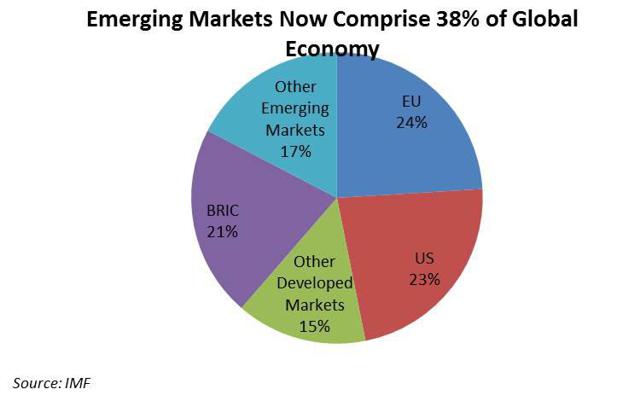 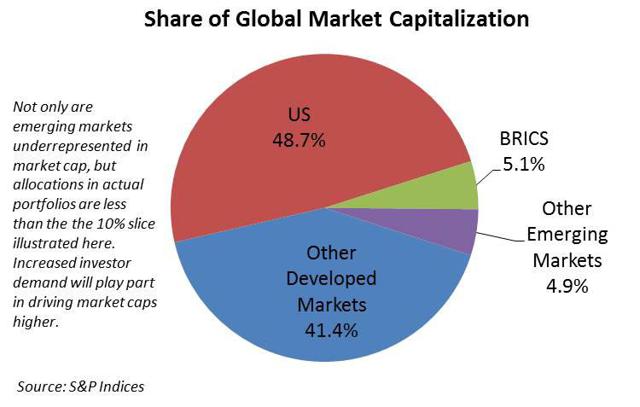 This top-down world lasted well into the middle of the decade and just when low-hanging yield had been taken off the table and future gains would be dependent upon more rigorous granular analysis, the bottom fell out due to the U.S. financial crisis. While there had been some wishful thinking of decoupling, meaning that these economies had grown less dependent upon the ebbs and flows of the developed-market business cycle, that was not the case and EM-related securities got hammered in the flight to safety.

Buttressing the fall for EMs was the fact that the reforms many countries had instituted prior to the crisis enabled them to return to growth fairly quickly. A slightly greater reliance upon internal consumption rather than trade was a mitigating factor, as were some well-timed stimulus programs, often infrastructure related. But the ball really got rolling again in EM financial markets when the Federal Reserve and other developed market central banks pushed the interest rates on safe-haven securities towards zero. The fact that these policies drove investors into the high-yielding and loving arms of emerging economies was corroborated in spring 2013 with the Fed simply stating it would begin to taper its $85 billion in monthly asset purchases. By mid-June the MSCI EM index was down 16% for the year. Since then EMs, as measured by the MSCI, have rebounded handsomely, gaining 23%.

It has been during the latter stages of this post-crisis EM rally that some of the fundamentals underpinning the EM theme have started to become unraveled. One of the most glaring examples has been the supposed unstoppable growth of the so-called BRIC countries. In the case of each constituent, growth in the past five years has considerably lagged rates registered between 2000 and 2007. Growth for this year is forecast by the IMF to be particularly forgettable with Brazil expected to grow 1.8% and Russia by 1.3% - and that was before sanctions were slapped on it in response to its adventures in eastern Ukraine. 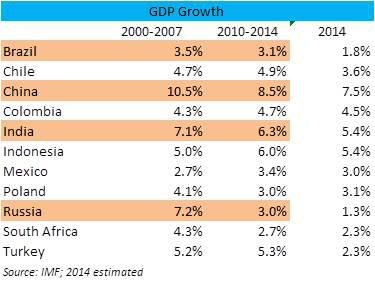 While on the subject, it's likely time to put the whole BRIC concept to bed. It has always been an odd match, with two countries being democracies (Brazil and India); two being natural resource powerhouses (Russia and Brazil) and two home to massive sources of cheap labor (India and China). In fact, about all these four have in common is the fact that all are large.

Russia perhaps is the most egregious backslider as the commanding heights of its economy…the energy sector…has been firmly brought back under state control. And minority shareholder rights have never been the country's strong suit. Brazil must conduct the balancing act of catalyzing sluggish growth but without further aggravating persistent inflation. In fact the inflation fighting chops of many developing economies have always been suspect as evidenced by the current pace of price growth in the likes of India, Turkey and South Africa. At least Brazil remains light years ahead of other Latin American basket cases like Venezuela and habitual defaulter Argentina. Only in the likes of Brazil can the Socialist Party presidential candidate in upcoming elections be considered the centrist of the field. 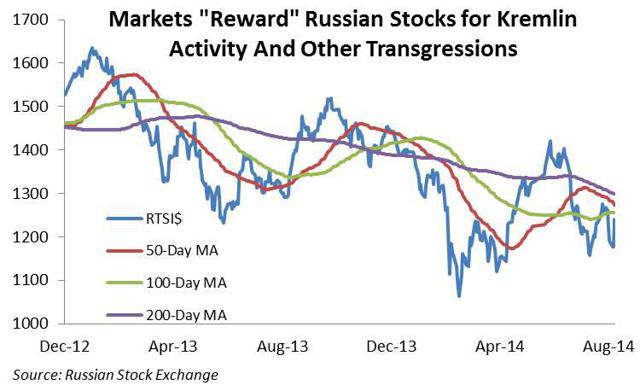 Another red flag for EM investors is chronic current accounts deficits. Often rapidly developing countries run such deficits as they acquire foreign-made machinery to boost the country's productive capacity. But when the source of such imbalances is excessive personal consumption, which by definition does not generate an attractive future return on investment, the long-term fiscal stability of the country is put into question. Turkey has long been singled out for its glaring current accounts imbalances. Recep Erdogon's transition to the presidency also bears watching given his authoritarian predilections. Yes his AKP party has delivered consistent economic growth to a previously troubled land, but any potential consolidation of power into the Presidential Palace, could spell trouble for enterprises not in favor with the regime. His promise to boost slowing growth through pie-in-the-sky infrastructure projects - e.g. the second Bosphorus - may also lead to unintended macroeconomic consequences. 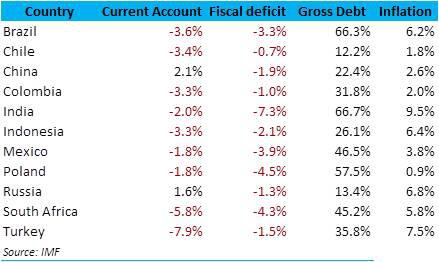 Given the above examples, one may begin to think that the paltry yields on Treasuries actually look attractive. But as stated in this note's original premise, the missteps of certain countries aid investors by illuminating where to avoid, while at the same time rightfully allowing countries that truly have their acts together to shine. And there are such destinations. Unlike many of the high fliers of the past decade, countries concentrated along the Pacific coast of Latin America have all averaged faster growth over the past five years than they registered during years leading up to the financial crisis. Chief among these are Mexico, Colombia and Chile. On the western side of the Pacific, Indonesia, among major countries, is growing at a faster clip than before the crisis. While their economies have cooled, rates in China and India still remain respectable, especially when compared to moribund regions like Europe. From the macro point of view - as always - it is paramount to focus on the countries committed to trade, liberalizing domestic markets, the rule of law and increasing transparency and liquidity in financial markets.

But how to invest?

Over the long-term equity returns tend to track GDP growth, so a good part of the battle has been fought once countries with favorable demographics, growth rates and regulatory regimes have been identified. Then there is the not-so little task of security selection. Tactically this gets a little tricky as equity markets in several attractive countries have already registered eye-popping gains in 2014. These should remain on the radar of longer-term investors, but given the yin and yang of financial markets, a stellar year like this one may very well be followed by one characterized by mean reversion. While previously having bashed the BRICs, India bears watching as the Modi government puts forth what could be favorable economic reforms. Brazil also faces a change in government, which likely would be welcomed by investors after recent underperformance and stalling of liberalization. Yet stocks in both countries are likely the beneficiaries of buy the rumor, sell the news, with the latter not yet having transpired. Benchmark indices in Sao Paulo and Mumbai have blown through their 200-Day moving averages. 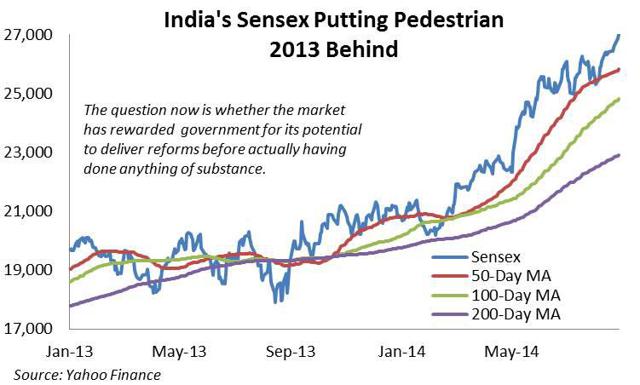 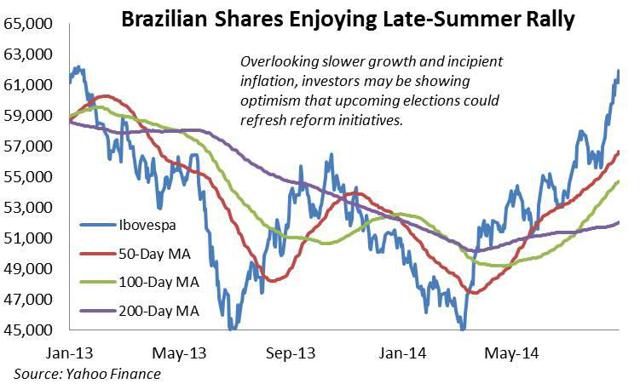 While not having experienced the gaudy gains that EM indices have in 2014, North American exchanges are still sitting at record highs. This development for now diminishes the attraction of accessing EM themes either through ADRs or U.S.-domiciled multinationals with substantial sales generated abroad. Should a correction occur, rupees to doughnuts more volatile EM stocks will see a more pronounced sell-off. 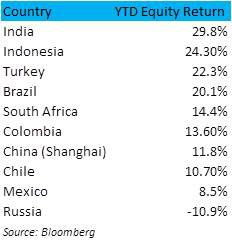 A less volatile, yet less rewarding, strategy would be to access EMs via bond markets, either on the sovereign or corporate side. These securities offer attractive yields vis-à-vis their developed market counterparts, and one must ask whether or not the incremental bump in return for regional stocks is worth the additional sleepless nights. To fund such positions, savvy investors may consider borrowing in ultra-low yielding European markets and investing in higher yielding emerging markets, especially as the ECB seriously considers going down the quantitative-easing path and keeping interest rates at rock bottom for years to come. These carry trades were all the rage before the financial crisis with the Yen being the funding currency of choice. Given the eurozone's newly-minted status as the world's lousiest advanced economy, its currency may displace the Yen in this regard.

So there you have it. A more simplified approach to EM investing: avoid countries run by despots that have backslid on liberalization, have spotty track records in reigning in inflation or fail to keep government budgets and current accounts under control. That eliminates about two-thirds of potential candidates right off the bat. Instead the focus should remain on identifying well-run companies in countries with solid securities laws and transparent and sufficiently liquid financial markets. Economies with growth increasingly driven by sectors geared towards domestic demand rather than the whims of the global business cycle are attractive, especially when the goal is to diversify portfolios heavy on developed market assets. There will be setbacks, and each investor must individually determine the level of incremental risk he or she would like to add in order to capture a few extra points of yield. But demographics and relative growth rates remain the winds at the back of emerging markets.

Robbie Morrison
60 Followers
Investment analyst concentrating on (and working in) non-U.S. markets. Favors bottom-up fundamental analysis but recognizes the necessity to apply a robust macro-overlay given linkages of markets, myriad crises and dynamic global economic environment. Sector concentration has been on those attached to emerging market themes, namely the commodities space.