RadioShack’s (NYSE:RSH) shares were hit in the wake of a disappointing prerelease of 4th quarter earnings numbers and the announcement of the retirement of CEO Julian Day. While the numbers were disappointing, I thought the press release actually had a lot to get excited about and the huge sell off drives the already cheap shares even cheaper (I thought the stock was too cheap at 19, and at 15.5 I’m significantly increasing my position). 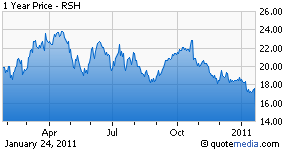 RSH preannounced 4th quarter earnings of 0.5 to 0.54 cents per share, compared with 0.6 last year and analyst projections for 0.66. That’s the headline number, and it’s not good. As a matter of fact, given the company's huge buy backs, diluted shares outstanding decreased from 127.1m to 111.9m, meaning net income will be down even more than the EPS figures lead you to believe. However, there is reason for some optimism. Revenue will come in at $1.37 billion versus analysts' expectations of $1.36 billion - and same store sales increased 1%. The weak results were caused by gross margin decline related to the T-Mobile business, higher sales of low margin wireless handsets, and an increase in SGA expense to support the Target Mobile roll out (a growth prospect which I’m very excited about).

Looking past the headline numbers, here are some things to be excited about. In the second half of the year, the company repurchased $398.6m worth of shares (19.8m shares) and still has $101.4m in share repurchase left. After the most recent sell off, the company has a market cap of ~$1.8 billion. So it repurchased over 20% of shares in just four months!

Now, huge share repurchase programs are nice, but if they’re done at inflated prices, they’re at best neutral for the company and at worst value destroying (think of all financial companies circa 2007, buying back shares hand-over-fist only to issue shares at a fraction of the price 12 months later). However, I have good reason to think the company is buying massive amounts of shares at significantly deflated prices, which will result in significant value creation once Mr. Market realizes how undervalued the company is.

How undervalued is the company? After the most recent buybacks (about ~100m worth), EV will be a bit higher than market cap, as the company goes from basically no net debt to a slight net debt position. With a current market cap of ~$1.8b, let’s say its debt position has increased by the entire amount of the buyback (so it basically generated no cash in the 4th quarter), and EV will equal $1.9b. Here are the EBITDA and EBIT from fiscal 2002 to today.

Note:TTM includes 4th quarter 2009 and the first 3 quarters this year

While we don’t have numbers for 4th quarter 2010 yet (the company only released EPS numbers), let’s assume it was a complete trainwreck and came in $70m behind 4th quarter 2009 in EBITDA. That would put this year’s ebitda at ~$420m versus $460m last year (the first 3 quarters of the year ran over $30m ahead of last year’s first 3 quarters. Given EBITDA for Q4 2009 ran at ~150m, this would imply EBITDA was basically cut in half for the 4th 2010, which seems pretty high IMO but let’s go with it). This would put the company trading at ~4.5x EBITDA for 2010 and less than 4x average EBITDA for the nine fiscal years 2002-2010. That’s really, really cheap. To put in perspective how cheap the shares are, the WORST EBITDA they have generated in the past 10 years was $300m in 2006, and they now trade for about 6x that amount.

In sum, I think investors who can look past the earnings disappointment and cloudy near term outlook can purchase a company with tremendous ROE and ROIC with huge growth opportunities (from the Target Mobile offerings and its huge exposure to the smart phone market) at a ridiculously cheap valuation.

Disclosure: I am long RSH.