Savvy preferred stock buyers, looking for a glimpse of what the future of interest rates looks like, are used to watching Fed announcements regarding the federal funds rate. While doing so was fruitful during the Greenspan Fed years, the post-QE reality faced by today's Fed requires a change in focus for preferred stock investors.

The continuation of the Fed's cheap money policy has pushed up stock prices. While that is good news for value investors (at least for the time being), those buying common stocks for their dividend yield have been disappointed. Common stock buyers have had to pay more for the same dividend income. 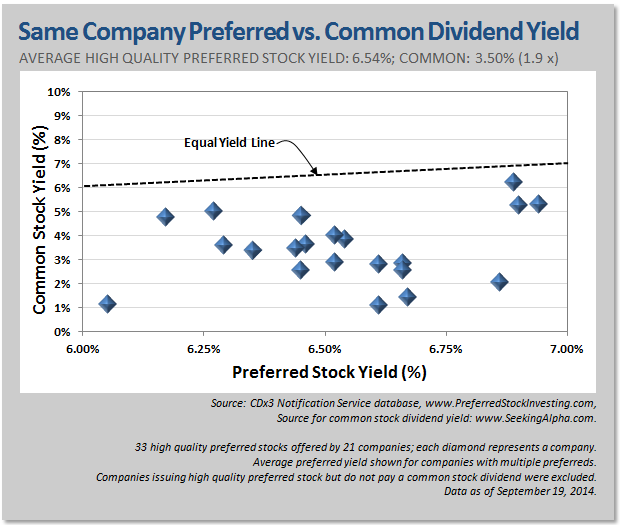 Beyond the compelling 1.9x dividend advantage being offered by today's high quality preferreds, these securities are delivering an average annual dividend yield of 6.54 percent to today's buyers.

While the Fed's low-to-no rate policy has decimated savers, those investing in stock shares have fared much better, especially preferred stock investors.

Federal funds rate - not what it used to be

Since the Fed's QE bond-buying program successfully lowered interest rates (and, commensurately, increased the market prices of fixed-return securities such as bonds and preferred stocks), many, including the Fed, assumed that backing out of the program would have the opposite effect - to raise interest rates and return prices back to normal.

As we now know, that did not happen. The Fed has been tapering out of the bond market since January with little or no effect on rates. And preferred stock prices have actually gone up a bit since January, not down.

Historically, the Fed has used their federal funds rate to manipulate interest rates throughout the economy. The Greenspan Fed famously demonstrated doing so using quarterly 0.25 percent increases to the federal funds rate for two years straight, starting in June 2004.

The federal funds rate is the interest rate that the Fed charges banks when the bank needs a short-term cash loan to boost their regulatory reserves. But after years of Quantitative Easing, soft loan demand and new reserve obligations, banks now have a whopping $3 trillion in excess reserves beyond today's regulatory requirements.

It is unlikely that the federal funds rate will be used to manipulate market interest rates in ways that we are used to seeing. The Fed needs to first soak up the excess reserves in order to restore the effectiveness of its federal funds rate changes.

Since last fall, Fed staff have been designing and testing a variety of mechanisms that will allow the Fed to (1) remove excess reserves from the banking system while (2) retaining control of market rates. While using its Interest On Excess Reserves (IOER) rate would be the simplest and most direct, this approach would almost certainly involve an unacceptable amount of speculation by market participants who are unable to deal directly with the Fed, introducing a loss of control and unacceptable volatility.

Another option would be for the Fed to simply offer higher rates on Term Deposits (like CDs) like they did after QE1 when excess reserves were about $2 trillion. But doing so now would be prohibitively expensive ($300 million per year for every basis point on today's $3 trillion).

The favored mechanism to soak excess cash reserves out of the banking system is to use the Fed's "reverse repurchase agreement" facility (RRP). In short, the New York Fed's Open Market Trading Desk sells Treasury bonds (of which the Fed is awash these days) to qualified "counterparties" (of which there are currently 139, including Freddie Mac, Fannie Mae, money market funds and several banks) in exchange for cash and an agreement to buy the bonds back from the counterparties at a future time for a specified price (which the Fed manages).

The return offered by overnight reverse repurchase agreements ("ON RRP") would be a bit better than the counterparties can get elsewhere, which not only returns control over the cost of overnight money to the Fed but soaks up excess reserve cash at the same time. From the statement following the Fed's two-day meeting on September 17, 2014:

Preferred Stock Investing
6.78K Followers
Whether you are the kind of investor who sticks with preferred stocks with a CDx3 Compliance Score rated 10 out of 10, or whether your portfolio has room for 9-score-and-lower securities, stay tuned for future articles recapping new IPOs and interesting preferred stock activity that we notice here at the CDx3 Notification Service.

Additional disclosure: The CDx3 Notification Service is my preferred stock email alert and research newsletter service and includes the database of all preferred stocks used for this article.