Overall media advertising has rebounded after the economic downturn that started in early 2008, but newspaper publishers have yet to see positive growth. As illustrated below, advertising industry dollars began to decline in the second quarter of 2008, but the drop was more pronounced for newspaper publishers, continuing a secular shift from print media that started before the recession. Even as the economy has improved, newspapers are still posting year-over-year revenue declines, while television and online advertising have rebounded sharply. In our view, the newspaper industry's decline will prevent Gannett (GCI), and New York Times (NYT) from sustaining positive top-line growth, given their dependence on publishing (roughly three fourths of total sales for each firm).

Predictably, advertisers are allocating fewer dollars to newspapers as consumers continue to spend more time watching television and surfing the Internet. As newspaper circulation drops, newspaper ad spending should also decline, creating a vicious cycle. U.S. newspaper circulation has fallen during each of the past 15 years, and newspapers' share of ad spending decreased to 23% in 2009 from 31% in 2002. Aside from the increasing amount of time people spend on the Internet, this medium attracts advertisers as it allows for more targeted and measurable marketing. The advent of portable digital technology (such as smartphones) has only accelerated the decline of newspapers. 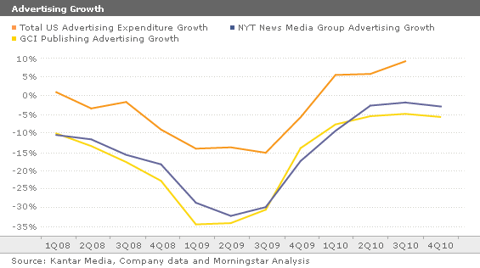 Newspaper publishers have expanded into digital offerings to mitigate the decline in print media. With digital ad revenue growth in the double digits, newspapers are looking to capture some of this growth. Gannett has expanded from its newspaper roots into the faster-growing area of online media. The digital segment, formed in 2006, has grown to over 10% of Gannett's sales. The company owns a majority stake in CareerBuilder and ShopLocal and holds an interest in Cars.com and Apartments.com through a 24% stake in Classified Ventures. New York Times is also focused on growing its digital offerings and improving its advertising potential through new technologies and expansion of existing content. It owns websites About.com and CalorieCount.com and will soon have an online paywall for NYTimes.com and charge for its iPad application.

In our view, digital media will not become a meaningful portion of overall revenue and certainly not enough to offset the loss of print advertising and circulation dollars. These fast-growing segments are a relatively small portion of total sales. Gannett and New York Times' bread and butter is still print media, so both firms have enacted a myriad of cost-cutting measures to offset the continued top-line declines. Gannett's reduced workforce, mandated furloughs, facility consolidation, and centralization of back-office functions has led to dramatic operating profit margin improvement of nearly 400 basis points during 2010.

New York Times has also reduced its workforce and salaries, consolidated facilities, and instituted operational improvements, contributing to 330 basis points of margin improvement in 2010. While we applaud the cost-cutting efforts to date, we doubt the publishers will be able to cut costs at the same pace as print revenue declines over the longer term. In our view, Gannett and New York Times need to show some real top-line improvement in order to hold onto recent margin gains. In addition, we are concerned that the newspaper publishers will run out of fat to trim and have to cut into muscle, negatively impacting the quality of their product, leading to greater subscriber erosion.

Further, we are skeptical about the newspaper publishers' abilities to monetize digital content. The USA Today and New York Times iPhone applications are among the top news-related downloads, and USAToday.com and NYTimes.com attract 56 million and 100 million visits per month, respectively, but all are currently free. New York Times will introduce a paid model for NYTimes.com this year, but only for the "most frequent" visitors. Gannett is testing a pay model for USA Today in three markets, but management states they are happy with having an ad-supported site for now.

Given the amount of news sources that do not charge for online content, we do not believe the revenue generated from charging from websites and applications will be meaningful. Additionally, the newspaper publishers must be careful with online ads, such that they do not compromise the user experience. An excessive amount of advertising online will likely deter customers.

Disclosure: Morningstar licenses its indexes to certain ETF and ETN providers, including Barclays Global Investors (BGI), First Trust, and ELEMENTS, for use in exchange-traded funds and notes. These ETFs and ETNs are not sponsored, issued, or sold by Morningstar. Morningstar does not make any representation regarding the advisability of investing in ETFs or ETNs that are based on Morningstar indexes.

Morningstar
4.77K Followers
Independent. Insightful. Trusted. Morningstar provides stock market analysis; equity, mutual fund, and ETF research, ratings, and picks; portfolio tools; and option, hedge fund, IRA, 401k, and 529 plan research. Our reliable data and analysis can help both experienced enthusiasts and newcomers.
Follow
To ensure this doesn’t happen in the future, please enable Javascript and cookies in your browser.
Is this happening to you frequently? Please report it on our feedback forum.
If you have an ad-blocker enabled you may be blocked from proceeding. Please disable your ad-blocker and refresh.