In January Steven Hansen observed that, through November, the trade deficit for manufactured goods was the equivalent of 1.3 million workers earning the median manufacturing wage in the U.S. Well, the trade deficit has been with us in a major way for nearly two decades. I am reminded of the 1992 presidential campaign where one of the three candidates, Ross Perot, argued against the adoption of NAFTA, The North American Free Trade Agreement. The other two candidates supported NAFTA.

Perot is famous for his statement that a free trade agreement that was not a two way street would create a “giant sucking sound” of jobs going south to the cheap labor markets of Mexico. Both of Perot’s opponents (George H.W. Bush and Bill Clinton) argued that NAFTA would create jobs in the U.S. because of business expansion.

However, the goods balance of trade for the U.S. with Mexico has been negative and steadily growing over the years. In 2010 it amounted to $61.6 billion, which was 9.5% of the total goods trade deficit last year.

So Perot has been vindicated in his opinion; expanded free trade has not been accompanied by an increase in jobs in the U.S. relative to the vast numbers of jobs created in the rest of the world as NAFTA became just a stepping stone on the pathway to global commerce.

Veronique de Rugy has produced a graph which shows how manufacturing output and manufacturing employment have varied over the years 1975 – 2010. 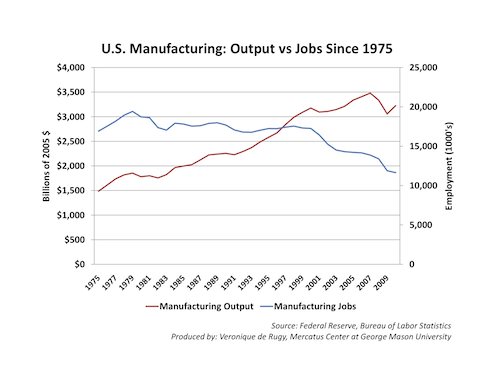 The giant sucking sound actually started in 1980 as manufacturing employment peaked in 1979. The decline in employment in 1980-83 can be associated with the double recessions of that time period, which was also evidenced in the drop in manufacturing output. But when the recovery took hold, manufacturing resumed strong growth but employment gradually declined from 1984 to 2000, after which the decline accelerated.

The rapid growth in the trade deficit for goods began in the early 1990s and we will start our detailed examination of the data with 1992, in deference to Mr. Perot.

Growth of the Trade Deficit for Goods 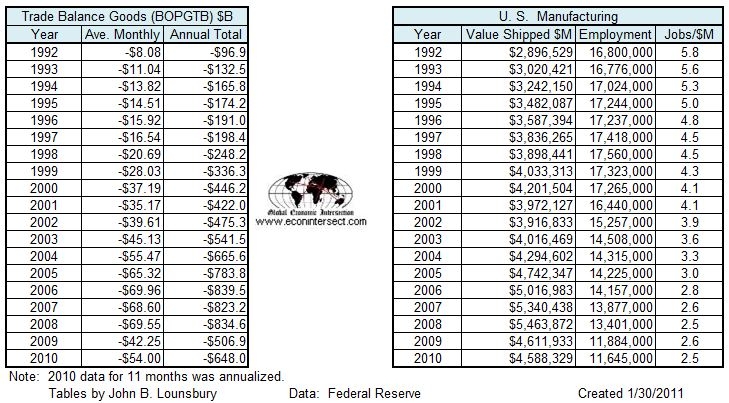 The sources for the data used in these tables are: 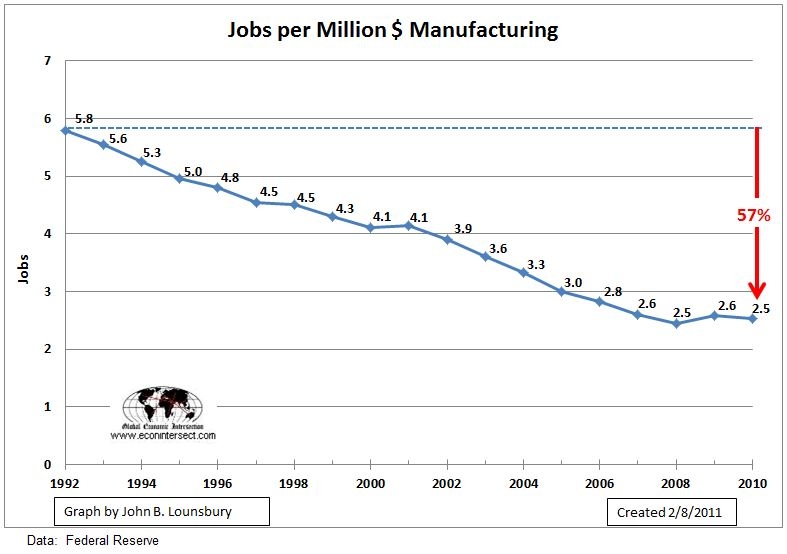 One cannot say that there is a U.S. jobs loss exactly equal to the trade deficit for manufactured goods. Here are some reasons:

However, it is not unreasonable to make the assumption that a significant portion of the manufacturing jobs equivalent to the trade deficit would have been created in the U.S.

The U.S. manufacturing jobs equivalence of the goods trade deficit is shown for each of the years starting with 1992 in the following table, along with the cumulative total. Hereafter we refer to the jobs equivalence as “jobs exported”. 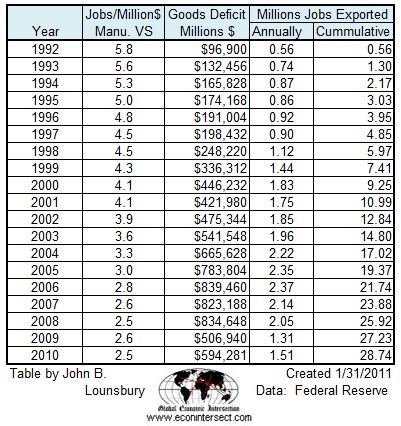 The jobs exported each year are shown in the following graph. 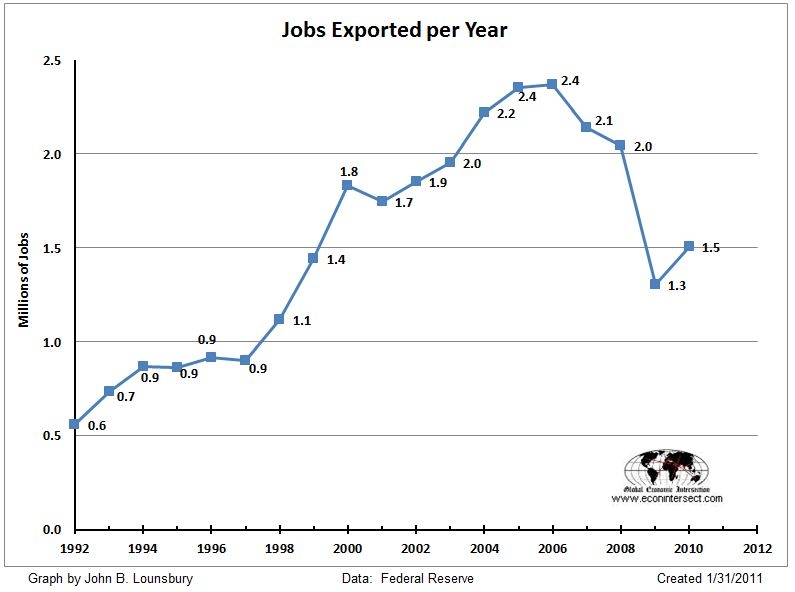 The following graph shows that there have been a cumulative total of almost 29 million jobs exported over the past 19 years. 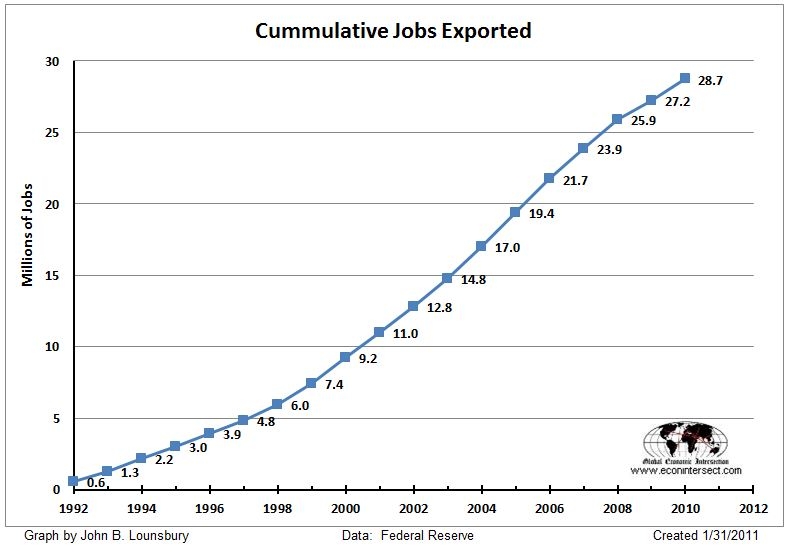 The total number of people employed today according to the latest BLS (Bureau of Labor Statistics) data is 139.3 million. If just half of the exported jobs were retained in the U.S., there would be about 153 million employed. The current civilian labor force is only 153 million so there would be no slack in the labor force at all. However, the labor participation rate has fallen from 67% in 2000-01 to 64.2% today. If the participation rate returned to 67% the civilian labor force would be 160 million. With 153 million employed the unemployment rate would be 4.4% and we would be complaining of labor shortages.

If only some, even less than half, of the manufacturing that has been outsourced had been retained in the U.S., it is likely that there would still be an emerging market boom, but there would not be the severe structural unemployment problem that exists today in the U.S. It seems, looking at these numbers, that where we are is not the result of doing a fundamentally bad thing. It could be argued that it is actually the result of taking a good thing too far. It seems we missed the sweet spot and simply botched a beautiful shot.

Free Trade is a very good thing, but free trade taken too far is destructive. Hard data shows why.

Disclosure: I am long SPY, QQQQ.

John Lounsbury
55.45K Followers
John Lounsbury is Managing Editor Emeritus and Co-founder of Global Economic Intersection. Formerly provided comprehensive financial planning and investment advisory services to a small number of families on a fee-only basis. He has a background that includes 34 years with a major international corporation, 25 years in R&D management and corporate staff positions. More recently he was a Series 6, 7, 63 licensed representative with a major insurance company brokerage from 1992 to 2001. From 2002-2010 he operated his own sole proprietorship business. Specific interests include political and economic history, econometric analysis, and investment strategy analysis. Recreational activities include hiking, non-technical mountaineering, and alpine skiing. He was also a founding partner and former managing editor of EconIntersect.com 2010-2021.
Follow
35 Comments