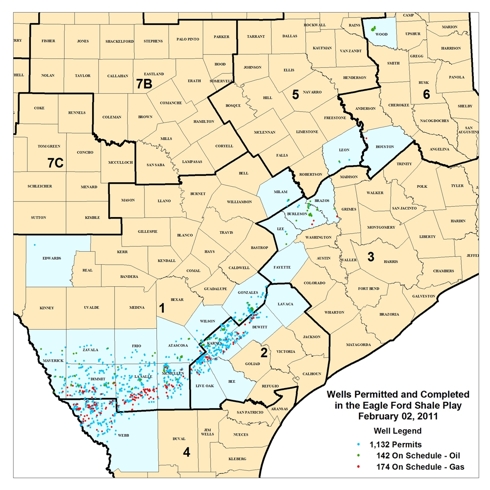 According to data from the Texas Railroad Commission, the following chart summarizes Eagle Ford one-year (2009-2010) oil and gas E&P growth:
There were 72 producing oil leases in 2010 and 40 producing oil leases in 2009. There were 67 producing gas wells in 2009 and 158 producing gas wells in 2010. The Eagle Ford may not get as much media attention as do the Bakken or Marcellus plays. However, it is clear there is a lot of action in the Eagle Ford and plenty of oil to be produced. In fact, it was the hottest oil play in the U.S. in 2010 although the acreage and land grab is starting to wind down.
So what companies are the major players in the Eagle Ford Shale?
Below is a chart summarizing my best estimation of current acreage holdings as a result of my online research of available sources (articles, press releases and company reports). This chart may not be up to date in terms of recent agreements and deals. It is meant to be a guideline for investors’ consideration rather than a definitive and completely accurate up-to-the-minute list. Information can be hard to find as many companies wish their actions to be private until further acreage agreements can be locked up. Much of the data shown is summarized from this website here.

*Chesapeake Energy sold a 33% stake in its acreage to China based CNOOC (CEO) for $1.08 billion.
**StatOil acquired 67,000 acres of the Eagle Ford shale formation through agreements with Enduring Resources and Talisman Energy for $843 million (total consideration to STO).
Other than Conoco Phillips, the large integrated oil companies aren’t significantly represented in Eagle Ford shale play. That said, smaller E&P companies can present better opportunities to investors in terms of risk/reward. Choosing the big winners in Eagle Ford may well come down to who holds acreage more prolific in oil than natural gas. That determination is an exercise left to the reader.
Disclosure: I am long COP.

Michael Fitzsimmons
18.84K Followers
Technology stocks, ETFs, portfolio strategy, renewable energy, and O&G companies. Primary goal is growing net-worth. I typically allocate a portion of my own portfolio and devote some of my SA articles to small and medium sized companies offering compelling risk/reward propositions. I am an Electronics Engineer, not a qualified investment advisor. While the information and data presented in my articles are obtained from company documents and/or sources believed to be reliable, they have not been independently verified. Therefore, I cannot guarantee its accuracy. I advise investors conduct their own research and due-diligence and to consult a qualified investment advisor. I explicitly disclaim any liability that may arise from investment decisions you make based on my articles. Thanks for reading and I wish you much investment success!