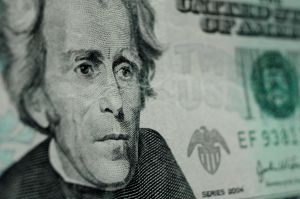 What’s up? Is the U.S. about to be downgraded? Is it bankrupt? Or is this a political thing?
None of the above, according to Gross:

"It's not a question of dissing the United States or questioning the credit of the United States, but simply a maturity reflection," Gross said. Treasurys are "mispriced [too high, meaning yields are too low] relative to the inflationary environment and the growth we see ahead and there are better alternatives in order to capture yield.”

(CNBC.com, “Gross: Why Pimco Dumped Treasurys From Biggest Fund,” March 10)
This is a remarkable turnabout from last July, when Gross was fearful of deflation and no growth. At the time, he was stockpiling U.S. Government bonds. For example, Bill’s comment in an interview last July:

(CNNMoney.com. “What the bond guru sees coming,” July 22, 2010)
Last year, the percentage of fund assets in U.S. Government securities was 51% in May and 63% in June. Today, it is 0%.
Bill is a troubled soul, yet makes astute investment decisions
In PIMCO’s monthly Investment Outlook, you can read both Bill’s investment thinking and his emotional angst. He has been bothered by many things that have gone on and are going on. And yet, he has directed the investment of the fund to those areas that offered good potential. (This separation of emotion from investment decision-making is the sign of a successful investor and is well worth emulating.)
A major problem for Bill and all bond investors: The bull market in bonds is ending
The graph below () shows how lengthy this bond bull market has been – every bit as long as the bear market before it. 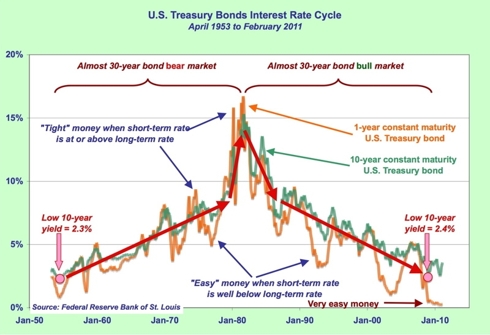 How likely is it that bond yields will rise (and prices fall)? In Bill’s mind, very. After all, he has dumped all “pure” yielding bonds – i.e., all that offer only a safe, predictable interest income.
What is Bill’s new strategy?
He is focusing on securities that offer extra yield and even capital gains potential. This strategy requires taking on other risks in place of maturity risk. Examples of the other holdings are corporate bonds, municipal bonds, foreign bonds, emerging market bonds, and derivatives (interest rate, credit default, sovereign risk and foreign currency). These are all areas in which PIMCO has invested over the years, but now they make up 100% of the holdings. (Bill has also talked about buying stocks, but we’ll see.)
But, doesn’t he think the end of the Fed’s bond-buying program [quantitative easing #2 = QE2] will harm stocks?
Yes, to the extent the QE2 money has fed stock speculation. However, Bill is not a stock guy, and I think he’s got it wrong on this thought. Not because there couldn’t have been such a speculative flow (we’ve certainly had it in the past), but because the enthusiasm and optimism for stocks is missing. (Bill, like others, sees the stock market’s 2-year rise as proof of stock fever, without taking into account the larger drop that preceded it or investors’ non-aggressive buying attitudes.)
More importantly, Bill describes (in his March 2011 Investment Outlook) where the money is going – to the U.S. Government. Although the Fed’s U.S. Treasury bond purchase program totals a massive $600 billion, that amount represents only 70% of what the U.S. Treasury is issuing. In other words, the money is simply transferring from one government pocket (the Fed’s) to another (the U.S. Treasury’s) via the bond dealers.

So, why is Bill so worked up?
Because the Fed’s two programs (abnormally low interest rates and QE2) have skewed the U.S. Government securities’ flows and pricing. Bill feels the programs have increased the risk of adverse yield moves (i.e., up) and price moves (i.e., down). Therefore, he decided it was best to be out of U.S. Government securities.
In fact, there is the potential of a double-whammy effect. The Fed isn’t retiring the U.S. Government bonds it’s buying. Rather, it is holding them for sale at a later date. When they do sell, they will be adding to the U.S. Treasury issuance (at that point, made larger by the Fed’s absence as a buyer), making a yield rise even more probable.
Yields dropped (prices rose) Thursday, March 10. Did Bill make a mistake?
No, for two reasons.
First, buys at the bottom and sales at the top are a matter of luck. There are a lot of factors and investors driving prices and it is impossible to determine when they will produce an expected move.
Second, experienced investors, like Bill Gross, prefer to be out of an old trend and into a new one early. They realize things might go against them for a while, but they prefer that to chasing prices after a turn has occurred.
So, what should investors do?
First, don’t worry that Bill Gross sees something that the rest of us don’t. We are fortunate to have his timely commentary to analyze. While he doesn’t tell us in advance what he’s going to do (no successful money manager does), he does give us his unvarnished thinking afterwards.
Second, have a clear strategy and sound reasons for owning long-term U.S. Government bonds. As Bill said, the problem isn’t with the issuer (the U.S. Treasury) – it’s with the issuance still to come, enlarged by the Fed’s future sales of what they’re buying today. He sees all that money demand coming when growth and inflation are heating up. This powerful combination usually (always?) results in higher yields/lower bond prices.
Third, it’s okay to do as Bill is doing and invest in other types of fixed-income securities. However, because they all carry added risk, they need to be well analyzed. And realize that, if yields rise and prices drop, investing in any types of bonds is like swimming upstream.
Fourth, ignore Bill’s comment about stocks possibly being hurt by QE2 ending. The U.S. Government is pulling in about $850 billion from bond buyers compared to the $600 billion paid out by the Fed to bond sellers. There is no evidence that those Fed bond proceeds end up in the hands of stock speculators.