Over the weekend, an announcement was made that the University of Texas endowment fund had decided to take delivery of $1 billion worth of gold. This was an absolutely huge development on multiple fronts.

First, the UT endowment fund’s gold purchase was a radical deviation from the standard institutional portfolio, the possibility of which we have considered for some time. Since UT has about $20 billion in assets, a $1 billion gold allocation would indicate 5% of its assets in gold. The standard institutional allocation to gold is 1%; a 5% allocation is a huge increase. If (or in our opinion, when) other institutions adopt a similar stance, the price of gold will skyrocket.

Second, the endowment’s purchase of this large an amount of gold gives a huge vote of confidence to gold and precious metals as an investment. For the past few years, financial media has lined up “experts” to tell us all about how gold is an irrational and poor investment, including figures as large as Warren Buffett’s right hand man, Charlie Munger.

Well, the UT endowment fund is neither dumb nor stupid, and it helps that it's not poor: It's well-funded institutional investors who are making a tactical investment decision, not a short-term trade. As Kyle Bass, the hedge fund manager who advised UT to purchase the gold, explained, the gold was purchased as a hedge against money-printing and currency debasement worldwide.

The UT fund is not a charlatan investor such as a hedge fund. It's purchasing gold on its merits as a long-term, fundamental investment. As other institutional investors witness such a large and respected fund invest in gold, others’ resolve to increase investments in gold will be solidified. Since gold only comprises 0.7% of the world’s financial assets currently, it is massively underowned by institutions, and UT’s purchase could be the catalyst to finally bring institutions to the table in a large way.

Finally, the endowment’s purchase of gold was of physical bullion. While we do not advocate physical bullion purchases for individual investors, UT’s choice of gold ownership through physical bullion rather than the NYSEARCA:GLD or other bullion alternative shows that it's purchasing gold as a long-term investment. Since the costs of owning bullion compared to the GLD are relatively high (vault rental, markup premium on purchase/sale), UT’s decision to buy bullion indicates it's measuring its holding period for gold in years, if not indefinitely.

As you can probably tell, we believe UT’s gold purchase is massively bullish for gold going forward, if only for the reasons of validation of our existing theories. As other endowments and pension funds gain confidence in buying precious metals as investments, precious metal prices will skyrocket.

This Week's Commitment of Traders Report

This week’s COT report shows that gold futures speculators actually reduced their bullish bets on the metal even as the price advanced to a fresh record. The below chart shows gold in yellow and managed money longs in white. 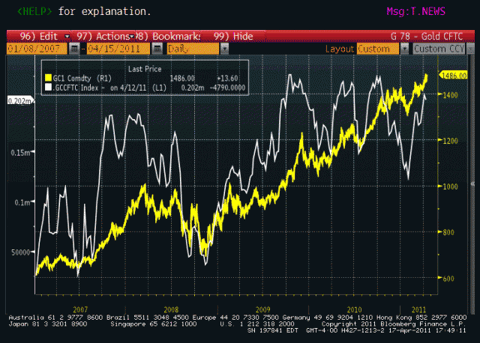 As can be seen, gold has continued its bull market without the help of increased managed money long participation. Physical buyers such as UT are fueling gold’s rise while futures speculators continue to approach gold’s rise with a bit of caution. As managed money regains confidence to push its net long exposure back to all-time high levels and beyond, the price of gold will appreciate considerably.

We continue to advocate long futures positions in gold. With gold breaking above key resistance at the 1440 level, the current rise in prices could be sustained for quite some time before undergoing another correction. Given how many times gold bumped up against the 1420-1440 level without successfully breaking through, its recent breakout could be the confirmation many traders were looking for to renew bullish bets.

For our simplest trade recommendation in quite some time, we would recommend purchasing the June gold futures contract at 1486, or the GLD at 145.51. If gold drops, we would advocate aggressively adding to long positions.

Ananthan Thangavel
1.37K Followers
Ananthan Thangavel is the Managing Director of Lakshmi Capital and Lead Writer for the RealFinance Commodity Analyst Newsletter. He is particularly proud of producing a return 35.01% annualized since inception (through 12/31/11) for his Lakshmi Capital Global Macro ARS clients (www.lakshmi-capital.com/performance). Mr. Thangavel is frequently interviewed by major media outlets including Forbes and Fox Business. He called the exact top of the silver market in an interview with Bob Lenzner of Forbes (http://www.forbes.com/sites/robertlenzner/2011/04/25/gold-and-silver-due-for-a-10-correction/) and also called gold's collapse in September 2011 (http://video.foxbusiness.com/v/1156274321001/bearish-outlook-for-gold-prices). Mr. Thangavel authors The Commodity Analyst, a newsletter service that provides weekly in-depth commodity and currency research and trading recommendations as well as daily blog updates to remind investors what to keep any eye out for (www.realfinancenewsletter.com). Ananthan welcomes collaboration and interaction in his Members Forum, a discussion board that allows for direct interaction with Ananthan. Ananthan Thangavel holds a B.S. in Economics from Northwestern University, and a J.D. from UCLA School of Law. PAST PERFORMANCE IS NOT NECESSARILY INDICATIVE OF FUTURE RESULTS.