Parmalat (OTCPK:PLATF) is a multinational food group with origins in Italy, present in all five continents through either a direct presence or through license agreements in the products areas of milk, vegetable, fresh (yogurt, cheese, desserts) with global brands such as Parmalat and Santal, as well as other strong international and local brands.

My interest in Parmalat initially started as I read Third Avenue International Value Fund's most recent letters to shareholders (see here). There are several factors that make Parmalat a special situation potential: 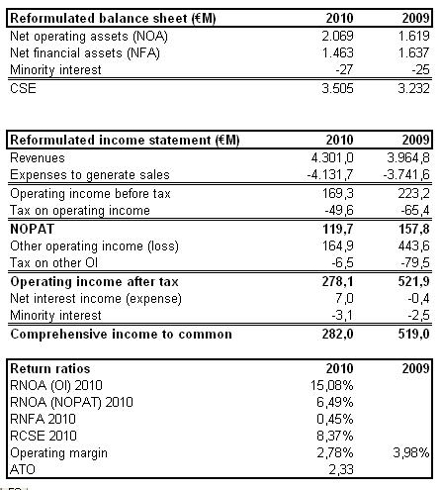 The reformulated balance sheet shows the accumulation of financial assets and the reformulated income statement shows how these assets generate next to no returns. The other operating income in 2010 mostly consists of one-time gains, so NOPAT is a more appropriate measurement of earnings power. Return on NOA is low at 6,49% as profit margins for 2010 are 2,78% combined with a asset turnover of 2,33. This puts Parmalat well below the 14% line used in the DuPont analysis of M. Soliman (see here). Return on equity is dragged down by a relatively high amount of financial assets bearing low interests. 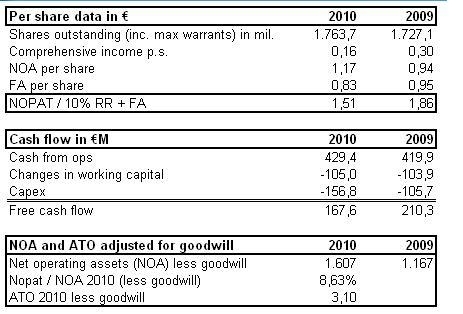 For the valuation there is no short term forecast. For the continuing value conservative assumptions were used, with growth rate of 2% and a required rate of return of 10%. As a comparison, in an analysis by Cheveroux in 2007 WACC was computed at 6,4% and revenue growth estimate was 4% (see here).

The estimation of long term profit margin was 4%, in line with the 2009 results. When compared with two similar dairy products companies, Danone and Dean Foods, margins seem to be persistent although very different between companies.

For NOPLAT the theoretical tax rate of 29.3% from the 2010 annual report was used. 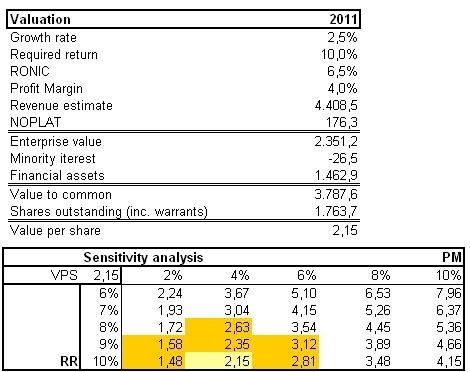 The value per share from the conservative valuation was €2,15 but as seen in the sensitivity analysis it is highly dependent on the required return and profit margins. But due to the conservative nature of the valuation and a possible improvement in margin, the upside potential is considerable.

The profit margin potential is important because Parmalat as other dairy companies produce relatively low profit margins (the median profit margin of the food products industry in the US in 1963-1996 was 4,4% according to Compustat data), as small incremental changes can have considerable effect.

Consider the 2010 results, if Parmalat had managed to squeeze out a cost reduction of just 1%, NOPAT would have been 24,4% higher.

There are a few likely scenarios of how this situation will play out, most notably:

Disclosure: I have no positions in any stocks mentioned, but may initiate a long position in OTCPK:PLATF over the next 72 hours.

Gisli Eyland
37 Followers
Fundamental Finance aficionado. Special interest in marketplace companies, exchanges and other "croupiers".Focus on software and travel industry.
Follow
To ensure this doesn’t happen in the future, please enable Javascript and cookies in your browser.
Is this happening to you frequently? Please report it on our feedback forum.
If you have an ad-blocker enabled you may be blocked from proceeding. Please disable your ad-blocker and refresh.