Not all of us are always looking for either large capital gains on our investments -- nor high yields -- we just want a very solid 6%. There is an investment that is seldom written about that we thought was worthy of a brief article. These are preferred shares issued by closed end funds (these are on the Gabelli, Royce, General American and Tortoise funds).

Why do we consider these so safe? The reason these are safe is because of the restrictions that the SEC puts on closed end funds when they issue either preferred shares or debt (any security senior to common shares) as outlined in Section 18 of the Investment Company Act of 1940. In a nutshell the Act provides that if a closed end fund issues senior securities (to the common) they must have a substantial asset coverage ratio on the securities. For preferred shares they shall have asset coverage of at least 200% of the issue size -- in the case of debt the coverage required is 300%.

What does this all mean -- it means that no common holder would get a penny in liquidation until the preferred holders are satisfied. The Act also prohibits the payment of any dividend to junior holders (common holders) until preferred holders are satisfied -- and in fact they can't declare a common dividend if the asset coverage is below 200%. Going one step further the fund may not issue additional senior securities unless the asset coverage is at least 300% immediately after the issuance. There are many other provisions in the Act, but these in particular provide extreme security to the preferred holder.

Let's take a closer look at the implications of this provision of the Act on the preferred shareholder.

A good example to use is the Gabelli Global Gold, Natural Resource and Income Fund (GGN), which is a closed end fund. 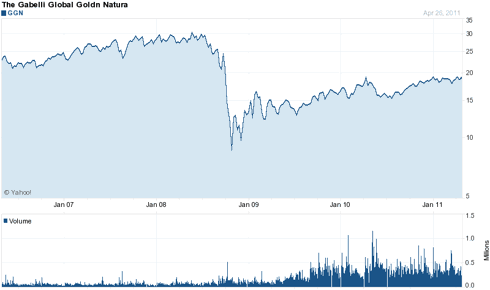 In the example above the fund was put in a position that they would lose their ability to declare any common dividends if the fund value eroded too much more -- thus not wanting to be backed in the corner they did what a closed end fund has to do if they are below (or in this case just much nearer) their coverage requirement -- they did a shelf registration for common shares in 2009, 2010 and 2011 and during the course of those years sold almost a billion dollars worth of new common shares. Of course they wanted to garner more funds for investment in the commodity boom, but the benefit to preferred share holders is that the coverage for the preferred holders is now over 1000% -- and this spells safety.

Like virtually all preferred shares issued now all of these shares are callable at $25 plus accrued dividends five years after issue. Also like all interest rate sensitive instruments the share price will move up and down as interest rates move -- -but the point is that they have extreme safety.

The four preferreds we like in the closed end sector are --

Each of these issues is now "call eligible," and thus could be called at anytime. We think that the call risk is minimal given the modest rates that they are paying on these issues. Since they are call eligible an investor should not pay more than par value plus accrued dividends for these shares.

You won't get rich with these shares, but you will have the maximum safety that can be attained with preferreds.

NOTE -- we are not securities lawyers (or lawyers of any type) thus interpreting securities law is our understanding of the law (in referring to the SEC Act of 1940) and in and of itself should not be contrued to be "gospel."

Disclosure: We currently have no positions and will not have over the next 72 hours, but likely will own these in the next 30 days.

Tim McPartland
1.11K Followers
Tim McPartland is a private investor with over 48 years of investment experience. Additionally he is the editor, and former owner, of The Yield Hunter, a website devoted to the hunt for income producing securities of all types, but in particular specializing in preferred stocks and exchange traded debt.Currently Tim is publishing a new website "Innovative Income Investor"
Follow
17 Comments