Since the release of the anti-SeaWorld documentary, Blackfish, the parks have been in trouble. Blackfish tells the story of Tilikum, an orca captured two years after birth which has now been linked to the deaths of 3 humans inside SeaWorld parks.

Even though Tilikum has now allegedly killed 3 people, the documentary focuses on the conditions of his captivity rather than painting him as a brute. Orcas are among the most social and intelligent species on Earth, yet Tilikum, a 12,000 pound killer whale, is kept in an oversized swimming pool.

Keeping orcas in captivity has been linked to disease, shortened life span, dorsal fin collapse, early pregnancy and reduced survival rate for calves, and occasional tragic attacks on humans. Confining an animal that large to a tank is like keeping a person in a cage. It's no surprise that SeaWorld's orcas have health issues, and Blackfish got the message out about these creatures' frustration to the general public. The outrage that the documentary stirred up is now started to impact SeaWorld on several key levels.

The first performance indicator which is suffering is park traffic. Attendance in the summer quarter fell from 8.9 million last year to 8.4 million this year, a 5.6% drop. The third quarter of the year is SeaWorld's most profitable season, but it's impossible to make money if guests aren't spinning the turnstiles. 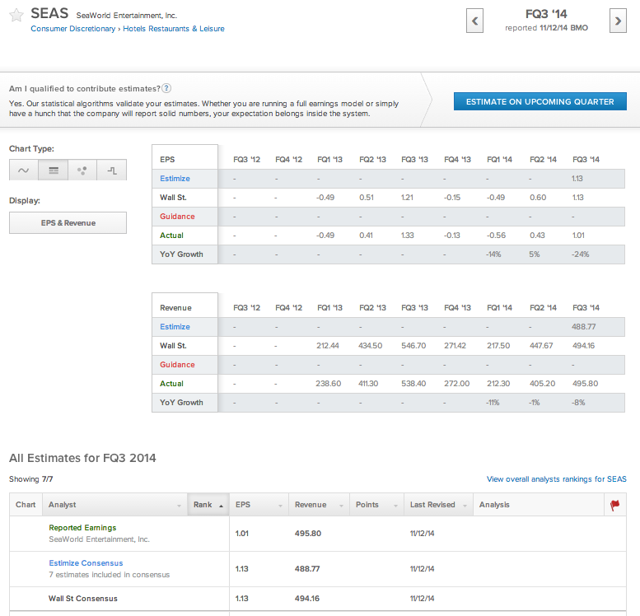 The next place to look is revenue. The 5.6% drop in park attendance carried over to an 8% decline in total sales. That's a pretty bad sign. Not only are fewer people showing up to SeaWorld, they're also spending less money. SeaWorld revealed that the average receipts per guest dropped from $60.74 in the third quarter of 2013 to $58.99, a 2.9% dip. 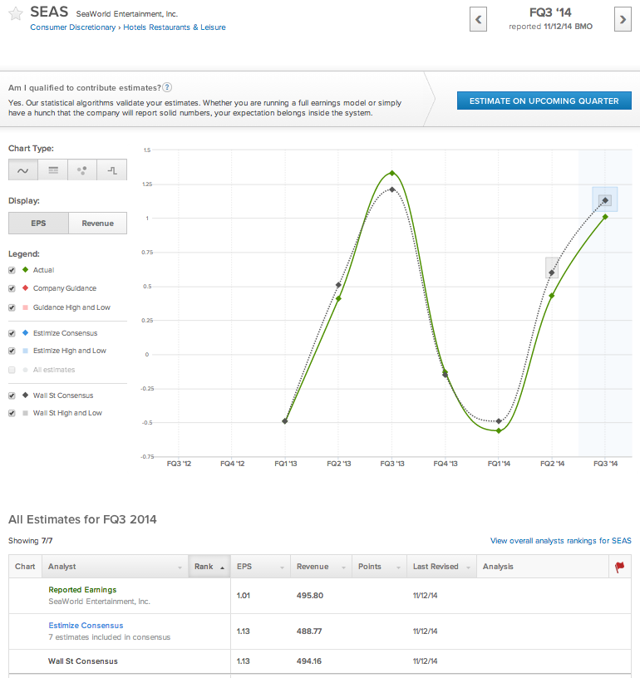 Traffic and sales were both down, but the worst part of this report was the bottom line. Third quarter earnings per share decreased 24% from $1.33 last summer to $1.01 this year. SeaWorld missed the consensus from investors on Estimize by 12 cents per share. Cash flow from operations dropped a shocking 24% from $178.6 million in FQ3 2013 to $.136.4 million.

Guiding forward to the next quarter SeaWorld noted that it expects full year revenue to be down 6% to 7% while EBITDA sinks 14% to 16%. If we take SeaWorld's revenue from last year and optimistically assume a 6% annual drop, 4th quarter sales would be expected come in around $259 million. That's pretty much right in-line with Wall Street's expectation for $256 million.

To SeaWorld's credit they do make an effort to educate their audience and demonstrate the importance, magnificence, and diversity of marine biology. But after Blackfish, there's a lot of people and investors siding with Tilikum rooting for this company to fail. Today was a victory for the anti-SeaWorld contingent.

Leigh Drogen
2.25K Followers
Leigh Drogen is the Founder and CEO of Estimize.com and Forcerank.com. Estimize is an open financial estimates platform which facilitates the aggregation of fundamental estimates from independent, buy-side, and sell-side analysts, along with those of industry experts and private investors. By sourcing estimates from a diverse community of individuals, Estimize provides both a more accurate and more representative view of expectations compared to sell side only data. Leigh started his career as a quant trader at Geller Capital, a White Plains, NY based fund where he ran strategies that looked at earnings acceleration and analyst estimate revision models, as well as price momentum and several sentiment indicators. Leigh later went on to be the founder of Surfview Capital, a New York based asset management firm that used many of the same strategies as Geller Capital, with a focus on higher beta names on an intermediate term time frame. His educational background includes focus in economics and international relations, specifically war theory. He is a graduate with honors from Hunter College in New York City. You can contact Leigh by emailing him at Leigh@estimize.com
Follow
3 Comments
To ensure this doesn’t happen in the future, please enable Javascript and cookies in your browser.
Is this happening to you frequently? Please report it on our feedback forum.
If you have an ad-blocker enabled you may be blocked from proceeding. Please disable your ad-blocker and refresh.