It has been an interesting week for Marine Harvest ASA (OTCPK:MNHVF) (MNHVY.PK). The company announced its first quarter results on Wednesday, May 11. The stock has also declined 24.6% in the past few weeks. This is a substantial decline and one that bears investigating. In this first part of a two article series, I will analyze the company’s first quarter results; I will then discuss the reasons for the stock’s recent decline in the second part.

I will begin this analysis by looking at the company’s first quarter presentation and results. Here are the highlights from this report: 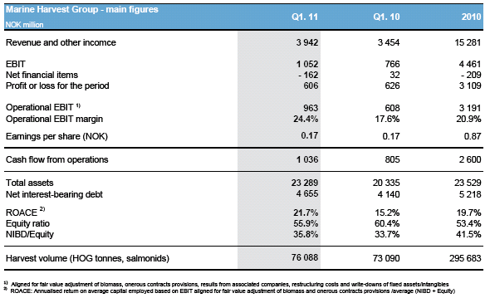 Marine Harvest had operating cash flows of NOK 1,035.6 million ($186.349 million) in the first quarter. This is not only an increase of NOK 230.2 million ($41.423 million) from the first quarter of 2010 but also is 40% of the operating cash flows from the entire year 2010. If Marine Harvest can maintain similar performance throughout the full 2011 fiscal year, then the company should deliver superior results to what it had in 2010.

It is unrealistic to expect every quarter to have the same results, but to put this in perspective, if Marine Harvest were to return the same operating cash flow for every quarter this year then the company would have NOK 4,142.4 million ($745.398 million) in OCF for 2011. That would be an increase of 59.3% from 2010’s results. When we consider that Marine Harvest’s first quarter EBIT showed 58% growth from the first quarter of 2010, this growth rate in OCF does not seem to be impossible to achieve but I am hesitant to predict a growth rate that high. The company does appear to be on course to deliver better profits than it did in 2010 though.

The earnings announcement was not all positive, however. Here are a few areas of concern that the company needs to improve upon in future quarters:

Neither of these are good assumptions to make. Marine Harvest closed at NOK 5.60 per share on the Oslo Bors exchange on May 14, 2011. Marine Harvest has TTM earnings of NOK 0.87 per share, giving the stock a trailing P/E ratio of 6.44. Assuming a 10% growth rate in 2011 would give the stock a PEG ratio of 0.64. Assuming that the company does indeed return EPS of NOK 0.68 in 2011 would give it a forward P/E ratio of 8.235 in 2011. The stock appears to be undervalued at its current levels considering the strong economic tailwinds that it has.

Marine Harvest has good prospects going forward. Marine Harvest Norway has already entered into forward contracts to sell 50% of their 2011 at prices just above what was achieved in the first quarter. The higher selling prices should generate higher revenue in the next few quarters unless spot prices collapse significantly since that would force the company to sell the 50% of its harvest that is not under contract at lower prices.

The global market for salmon has been growing at double-digit growth rates over the past few years. Management expects to increase production from Marine Harvest Chile and to sell it into the growing world market for salmon. Marine Harvest expects to increase its harvest in 2011 to 341,000 HOG tonnes. This would be an increase of 15.3% from 2010 levels. The company is also investigating new markets to sell into. Management specifically mentioned emerging markets such as Russia as being “very promising.” It is possible that demand could stall and this would lower prices through the increase in supply and static demand. It seems more likely though that the global salmon market will continue to grow and Marine Harvest will be growing for the next few years.

Disclosure: I am long OTCPK:MNHVF.

Power Hedge
13.33K Followers
Author of Energy Profits in Dividends
In-depth Research on underfollowed dividend stocks with 7%+ yields
Power Hedge is an independent stock research and analysis firm with a passion for macro- and microeconomic analysis. Power Hedge focuses our research primarily on dividend-paying, international companies of all sizes with sustainable competitive advantages. Power Hedge is neither a permabear nor a permabull. However, we believe that, given the current structural problems in the United States, the best investment opportunities may lie elsewhere in the world. The firm's strategy is primarily buy and hold, but will stray from that strategy on occasion. Our ideal holding period is forever, however we realize that both internal and external forces can impact an investment. For this reason, we believe that it is vital to keep a close eye on all of your investments. We do not believe in changing an investment based on short-term market swings.