Marine Harvest ASA (OTCPK:MNHVF) (MNHVY.PK) shares have fallen significantly since the beginning of May. 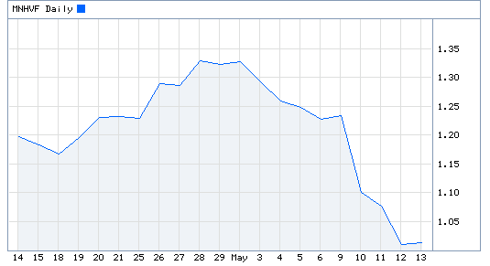 Marine Harvest ASA is a Norwegian company that trades on the Oslo Bors exchange in Oslo, Norway. It trades under the symbol MHG on this exchange and the share price is denominated in Norwegian krone (NOK). The U.S. dollar has strengthened against the Norwegian krone over both the past 10 and past 30 day periods: 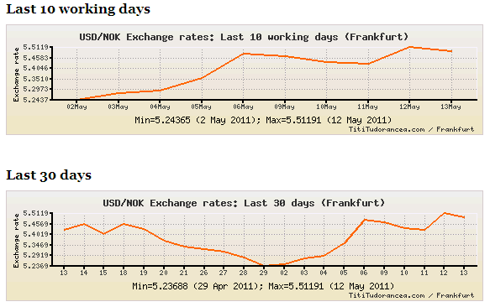 This weakening of the Norwegian krone relative to the dollar was responsible for at least part of the fall in Marine Harvest’s share price over the past month. We can obtain more evidence for this fact by looking at the share price of Marine Harvest on its native Oslo Bors exchange.

As is immediately visible, Marine Harvest fell on the Oslo Bors exchange as well as on the American Pink Sheets. The decline on the Oslo exchange was much less, however. MHG lost 12.22% over the past thirty days. The stock reached a high on April 28, 2011 of NOK 7.00. The total decline from that price to the May 13, 2011 closing price of NOK 5.60 was NOK 1.40. This would be a decline of 20% in a little over two weeks. The only explanation for the larger decline of MNHVF on the pink sheets is the strengthening of the US dollar. If the pink sheets ADR would have declined more than the value of the actual shares then it would represent capital markets inefficiency. In the case of this form of inefficiency, arbitrageurs should move in and arbitrage the stock until the currency-adjusted values of the ADR and the Oslo share are equal.

Marine Harvest went ex-dividend on May 10, 2011. The dividend is NOK 0.80 ($0.144) which represents a dividend yield of 11.71% of the May 9, 2011 closing price of NOK 6.81. On May 10, 2011, the stock price fell to NOK 6.00. Financial theory tells us that dividends decrease the value of a stock by the dividend amount. In most cases, this change is hardly noticeable since the dividend is usually quite small relative to the stock price. Normal trading of a stock typically causes fluctuations of a share price larger than a dividend payment so the decrease in price is not obvious. Marine Harvest is somewhat different. The dividend is quite large in comparison to the closing stock price. The fall of NOK 0.81 can easily be accounted for by the dividend of NOK 0.80. The remaining NOK 0.01 appears to be normal trading noise.

Marine Harvest announced its first quarter earnings on May 11, 2011. I discussed the results previously. Overall, the first quarter results were quite good. They were not absolutely amazing however, nor were they as good as Q4 2010. Marine Harvest stock fell again on May 11 and May 12, recovering very slightly on May 13. It is certainly possible that this earnings report was a catalyst for the stock decline.

There are two major points in the Q1 2011 earnings report (PDF) that appear to be the most likely candidates for causing a decline in the stock price.

Marine Harvest tends to have fluctuating results from quarter to quarter. This is immediately apparent by looking at the earnings results from past quarters. The decrease in earnings on a quarter over quarter basis is fairly typical for this company and is not particularly worrying for a long term investor. Marine Harvest had better performance in the first quarter of 2011 than any quarter of 2010 except for the fourth based on revenues, EBIT, or harvest volume. Marine Harvest provided strong guidance going forward during their earnings presentation.

A look at the Income Statement reveals a few other causes for the differential as well. Marine Harvest had very little impact to its Q1 2011 income caused by currency fluctuations and a fairly substantial one in Q1 2010. The net beneficial effect to Marine Harvest’s first quarter 2011 income caused by currency fluctuations was NOK 9.5 million ($1.71 million). The comparable figure in Q1 2010 was NOK 127.7 million ($22.9788 million). Marine Harvest also paid significantly more in taxes in Q1 2011 than in Q1 2010. The company’s tax bill for the most recent quarter came to NOK 284.3 million ($51.1579 million). This compares to a tax bill of NOK 172.4 million ($31.0223 million) in the prior year quarter.

The stock may have fallen too far too fast. Marine Harvest has a trailing twelve month EPS of NOK 0.87. At the May 13, 2011 closing price of NOK 5.60 per share, the company has a trailing P/E ratio of 6.44. The global market for salmon has been growing at double-digit rates for the past few years. This trend looks like it will continue for a while longer. Marine Harvest, which controls 25-30% of the global market for salmon, should continue to benefit from this growth in the industry. If Marine Harvest experiences 10% growth over the next year, then the stock would have a PEG ratio of 0.64. Marine Harvest also sports a double-digit dividend yield and management is investigating expanding the company into emerging markets such as Russia. The company looks to have strong prospects and could be undervalued at the current levels.

Disclosure: I am long OTCPK:MNHVF.

Power Hedge
13.05K Followers
Author of Energy Profits in Dividends
In-depth Research on underfollowed dividend stocks with 7%+ yields
Power Hedge is an independent stock research and analysis firm with a passion for macro- and microeconomic analysis. Power Hedge focuses our research primarily on dividend-paying, international companies of all sizes with sustainable competitive advantages. Power Hedge is neither a permabear nor a permabull. However, we believe that, given the current structural problems in the United States, the best investment opportunities may lie elsewhere in the world. The firm's strategy is primarily buy and hold, but will stray from that strategy on occasion. Our ideal holding period is forever, however we realize that both internal and external forces can impact an investment. For this reason, we believe that it is vital to keep a close eye on all of your investments. We do not believe in changing an investment based on short-term market swings.