The Eagle Ford may soon become the biggest producing shale play in Texas, and possibly the whole of the United States, judging by a new analysis by Evaluate Energy of horizontal drilling data sourced from Smith Bits Stats.

The Eagle Ford Shale Formation, located in South West Texas covering 22 counties, is a relatively low producing play in the state. Its neighbouring plays, the Barnett and the Haynesville (Louisiana & Texas), have been grabbing all the headlines in recent months as they vie for the position of biggest producing play in the US. The Eagle Ford is currently dwarfed by its neighbours in terms of production (Q4 ’10 – Barnett 877,000 boe/d, Haynesville 708,000 mboe/d, Eagle Ford 66,000 boe/d) but a recent surge in new wells suggests this all about to change.

Drilling activity in the counties that hold the Eagle Ford formation has been growing dramatically for the past year, and now, at the end of the first quarter, is the area with the most new wells being drilled in the state. Up until a just year ago, drilling was negligible. In contrast, as the graph below shows, the number of new horizontal wells in the Barnett Shale counties has fallen to a much lower level than its peak in mid-2008. The number of new wells in the Haynesville counties (Texas & Louisiana) has now slipped into a slight decline following a 2-year increase up to Q1 2010. 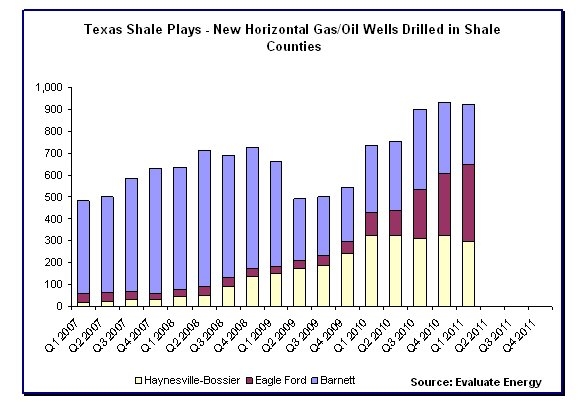 A significant factor here is that the Eagle Ford play is also liquids rich compared with its Texan counterparts, which are almost exclusively gas producers. As shown below, horizontal drilling, in the Eagle Ford counties targeting both oil and gas has been growing rapidly; in the last year, oil drilling has in fact increased at a faster rate than gas. 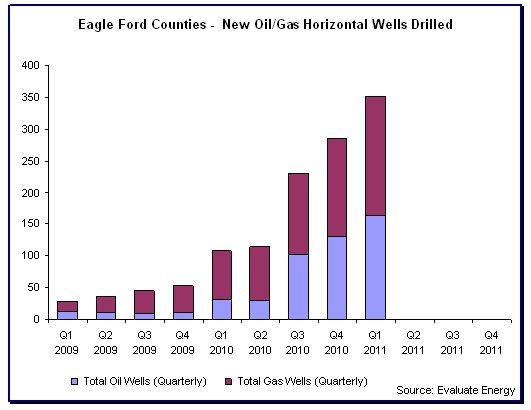 Much like its Texas neighbours, the drilling in the Eagle Ford area is now almost exclusively development drilling, suggesting that production in the Eagle Ford may overtake the Barnett and Haynesville sooner rather than later. (See graph below). 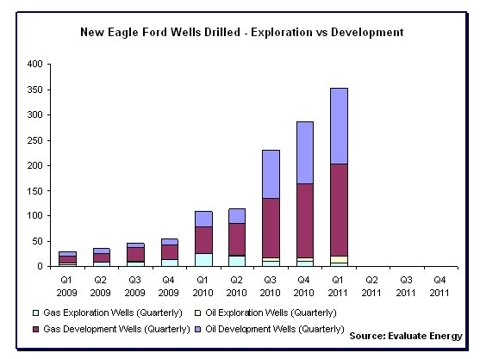 Four of the bigger producing companies in the play, Anadarko (APC), EOG Resources (EOG), Petrohawk Energy (HK) and SM Energy (SM), are amongst those appearing set to benefit from the resources being sought after. Movement should also be expected from Chesapeake (CHK), ConocoPhillips (COP), ExxonMobil (XOM) -through XTO - Rosetta Resources (ROSE) and Swift Energy (SFY), whose production in the play, despite significant presence, has so far been modest.

Evaluate Energy
86 Followers
Evaluate Energy is a London based Oil and Gas consultancy and software firm. Its product is used by the world's leading energy corporations and their advisors as a prime source of strategic, financial and operating analysis of company and industry performance. It's unique software gives clients the edge in getting this information quickly and easily.