Bloomberg has a new video series out called "China's Ghost Cities." (You can watch the first segment here on YouTube).

The reporter, Adam Johnson, describes how the Chinese government is building massive cities that no one lives in yet. The expectation is that China is going to "grow" into these cities.

A remarkable idea, really. The authoritarian planners in Beijing or wherever decide it would be good if, say, a million people or more could relocate to a pre-planned area.

Then they build out the infrastructure -- or rather the entire metropolis, skyscrapers, stoplights and all -- and wait. 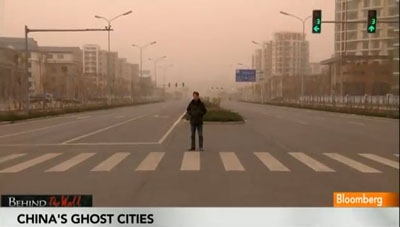 Stop for a moment and ponder how nutty this is. The last time your editor checked, central planning was not a huge success. According to history, bureaucrats wielding directives over long distances tend to allocate resources poorly.

But are ghost cities a recipe for a bust? Some say no. The Bloomberg reporter, for instance, assures us that China's economics are different -- that is to say, "it's different this time." (Where have we heard that before ... )

It is supposedly OK that these ghost cities, built for millions of inhabitants, have only tens of thousands of people living in them -- because all that deserted square footage will eventually be put to good use.

As a bonus, building ghost cities is great for economic growth.

Via running superhighways out to the middle of nowhere, erecting steel and glass towers in the boondocks, China generates new jobs in construction, civil engineering, city planning and the like. All this construction looks fabulous on paper. The ghostly infrastructure gets counted as productive output, and the super-aggressive GDP target is maintained.

But what is wrong with that picture?

For one, there is the central planning problem. Growth and development are free market forces, with signature markings of trial and error. Successful cities are built from the ground up, not decreed by bureaucrat stamp. So how does the government know where a new metropolis should go, or what its optimal size should be?

Then you have the accounting problems. Should the promise of tomorrow be so readily reflected on balance sheets today?

Imagine if a public corporation said, "We are going to grow 20% per year by building idle factories in the middle of nowhere, that no one is going to use for quite some time. Don't worry though, the demand for these factories will show up. We'll make a profit on them eventually. Just don't ask when."

Such a plan would be brutalized by the market, because public companies are held accountable for profits and return on investment. (At least most of the time -- in bubble times investors will happily suspend their rational faculties.)

The Chinese government, of course, does not have to seek profit in its actions. Or it can measure results in some entirely non-traditional way, via "how many jobs did we create" or "how do the GDP numbers look."

At the end of the day, the "ghost city" mandate is directly channeling John Maynard Keynes, who once suggested digging holes, then filling them up again as a way to put men to work.

China is being more sophisticated. Rather than digging holes, it is putting up buildings. The effect is the same though. "Some day" the empty skyscrapers will have value -- if they are not condemned as worn-out structures first -- but until then they are just holes.

China bulls are not bothered by the ghost cities for at least three reasons.

First, they have convinced themselves (with more than a bit of faith) that the empty metropoli will one day (sooner rather than later) be full.

Second, they figure China has a lot of money to burn even if the ghost cities don't work out.

And third, as the old saying goes, "a rolling loan gathers no loss." As long as the speculative music is playing, the property developers can keep dancing.

The trouble, as always, comes when the music stops. If China turns out to have built, say, 20 years of excess capacity by the time that happens, then hundreds of billions' worth of stagnant projects will have to be written off.

Tougher still is the idea that China's "economic miracle" is actually a heavily leveraged bet on mercantilism... propped up by runaway construction ... with the tail end of the boom pulled recklessly from pie-in-the-sky projections for future growth.

That is another favorite tactic of investment manias: Along with the embrace of forever skyward growth curves, mortgaging tomorrow (and borrowing against it) for the sake of today.

Even if China can write checks to cover the write-off costs of all those cities, there is a big multiple built in to the global economy right now on the assumption that China growth is the real deal. When it sinks in that much of that growth is actually "ghost" or "phantom" growth -- in keeping with these empty monuments to nowhere -- the collapse of that multiple could hurt.

Article brought to you by Taipan Publishing Group. Additional valuable content can be syndicated via our News RSS feed. Republish without charge. Required: Author attribution, links back to original content or www.taipanpublishinggroup.com.

Justice Litle
199 Followers
Justice Litle is editorial director for Taipan Publishing Group. He is also a regular contributor to Taipan Daily, a free investing and trading e-letter and editor of trading research advisory service, Macro Trader. If his name sounds familiar, it's because Justice is regarded as one of the top trading experts in the world. While pursuing a Ph.D. at Oxford University in England, Justice began his financial adventure that includes researching and investing in trading and commodities. Because of his trading expertise, Justice has been quoted in The Wall Street Journal... written multiple articles for Futures magazine... given regular market commentary to the likes of Reuters and Dow Jones, and contributed to the book Trend Following. In fact, under his guidance, Outstanding Investments, a world-class natural resource newsletter, delivered a top-rated performance two years in a row. Disclaimer: Taipan Publishing Group LLC and Stansberry & Associates Investment Research are separate companies, and entirely distinct. Their only common thread is a shared parent company, Agora Inc. Agora Inc. was named in the suit by the SEC and was exonerated by the court, and thus dropped from the case. Stansberry & Associates was found civilly liable for a matter that dealt with one writer’s report on a company. The action was not a criminal matter. The case is still on appeal, and no final decision has been made.
Follow
14 Comments