Mention NCR Corporation (NCR) to the average person (including myself) and he would not be able to tell you what the company does. Some irony exists in that reality, given that most of us tend to encounter NCR on a daily basis. From the company's latest annual report:

The kiosk business includes DVD rental machines. NCR brands these machines using the Blockbuster (OTC:BLOAQ) Express trademark. Long story short, Blockbuster's new owners hope to ixnay the whole arrangement. NCR has sued, arguing that, regardless of Blockbuster's sale to DISH Network (DISH), they have the right to use the Blockbuster likeness on their kiosks. While I understand the lawsuit, it surprises me a bit. It seems to me that NCR could spend its time -- and money -- more wisely by making an aggressive attempt at dominating the DVD rental kiosk space.

For months, rival Coinstar (CSTR) has made empty threats that it will partner with somebody, somewhere to commence online streaming. Depsite its ups and downs, Coinstar finally appears back on track. If its smart, it thought better of getting into a streaming effort it simply cannot afford. Management seems better focused in recent weeks. Last week, Coinstar closed a deal to bring 1,400 of its coin-counting kiosks to Safeway (SWY) stores across the country. One analyst believes the Safeway deal serves as an end-around to knock Blockbuster kiosks out of the grocery store chain. Coinstar leads the space numbers-wise; it operates roughly 30,200 Redbox machines at more than 26,000 locations. NCR, however, bites at its heels by penetrating more and more markets.

I don't see the point in these squabbles -- NCR v. Blockbuster or Coinstar v. NCR. NCR could render the Blockbuster thing moot. And Coinstar could provide incredible value to its shareholders -- people it colored very unahppy not so long ago -- by selling out to NCR. In combination, the two companies could not only lock up the DVD rental machine market, but they could become the primary force in the self-service kiosk space.

From a financial standpoint, the deal makes sense. It's quite feasible for NCR. And Coinstar would be wise to accept a bid. According to Yahoo! Finance, NCR has about $480 million in cash and $11 million in debt, while Coinstar counts $23 million in cash and more than $355 million in debt. If Coinstar has its kiosk sights set on anything beyond coins, DVDs, and video games, it needs some firepower behind these efforts. NCR can provide it. The company already has a massive self-service kiosk presence in several areas (See above excerpt). From time to time, it becomes obvious that two companies would be better off teaming up, as opposed to knocking one another out in a war of attrition.

As for the two stocks, NCR has enjoyed a steady run since last year. The CSTR chart is downright erratic and somewhat hysterical. 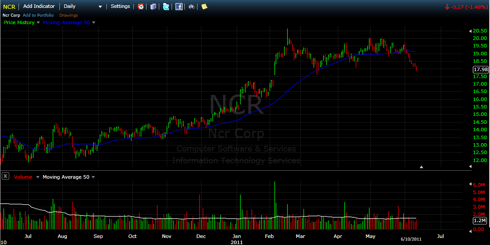 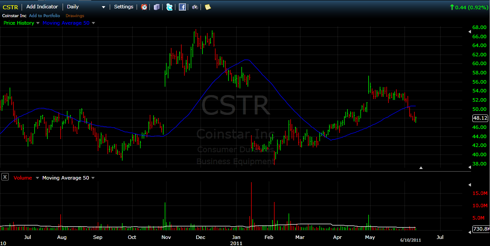 For a while I have held the belief that Coinstar will not end up going at it alone. It seems that the long-rumored Amazon.com (AMZN)/Coinstar partnership died somewhere on the side of the road. Even though digital efforts such as streaming will ultimately rule, just as cable can still exist, so can the kiosk business, as long as it does not relegate itself to media items. That's why an NCR/Coinstar union makes perfect sense. On that sentiment -- or something similar shaking out -- I think the following investment approach could make sense.

Take a relatively short-term approach to CSTR, banking on a takeover or news of a major partnership finally coming to fruition. I would play this notion using in-the-money CSTR calls. In-the-money calls cost more than out-of-the-money options, but there's a reason for that -- you take less of a risk (i.e., have a better probability of profiting) in exchange for less than a Lotto jackpot reward. Personally, I would wait for a pullback in CSTR -- the stock's performed well lately, even in the face of an overall market decline -- and then consider something like the CSTR October $42.50 calls.

As for NCR, there's not a ton of volume or open interest in the options, therefore I would lean toward buying the stock outright. After its impressive run, it has pulled back slightly this month. This might be a good time to accumulate the stock on dips. It presently trades with a forward P/E of just under 10.

While I am not usually one to get into stocks on takeover speculation, there's a time and a place for the approach. When it seems obvious that something's got to give in a particular business, I have no issue going long on the count of potential M&A activity or a partnership as long as the companies involved run strong businesses. Because Coinstar does not inspire a ton of confidence, I would only put a small amount of capital into its options. I would be willing to go bigger into NCR, given its stronger balance sheet and diverse revenue streams.