If you haven’t yet figured out that there is rampant fraud amongst many Chinese stocks (mainly RTOs), you obviously live in a “financial cave”. The story has become so mainstream in China and the United States that it is actually featured in this week’s Time Magazine.

We exposed Longtop Financial (LFT) and were the first to write on China MediaExpress (OTCPK:CCME), we now expose the fraud behind Harbin Electric (NASDAQ:HRBN).

In its last reports on Harbin Electric, we have shown that: 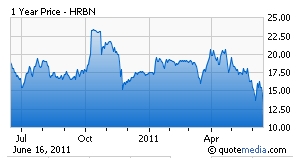 It is our opinion that it is now time for the SEC to halt this security.

The future of Harbin’s stock price is currently propped on the crutch of a purported $24 buyout offer from its Chairman / CEO, which we believe is a sham. With time stretching seven months since first proposed, we still have no binding, official takeover bid filed in an 8-K, just a few press releases, and now the boilerplate document of a purported supporting loan that seems half baked, as discussed in the last report. These filings are always tagged with the company disclaimer:

There can be no assurance that any definitive agreement will be executed with respect to this proposal or that this or any other transaction will be approved or consummated.

Yet, through reliable sources, we have just obtained documentation that...

The Harbin Chairman/CEO Has A History Of Fraudulent Loan Guarantee Documents.

In the settlement agreement with CCIE, Tianfu Yang admitted guilt in order to get CCIE to agree to drop criminal proceedings in the matter.

(We have gone to great length to verify the authenticity of these documents, and will publish any challenge or correction that can reliably demonstrate that they are not authentic.) Here they are for your viewing pleasure:

This link shows the signer from China Construction is the official legal representative of CCIE:

We recall vividly how vociferously Longtop officials decried as “unfair” and “irrelevant” when we published references to a lawsuit, documenting prior misconduct of the Chairman of Longtop. Similarly, this document goes directly to management’s credibility and trustworthiness. And since Harbin’s buyout valuation rests solely on the credibility of the Chairman and his offer, this should be the end of the road for the Harbin charade.

We wonder how this disturbing legal baggage will reflect on Chairman Yang creditworthiness to his bank or any other bank evaluating this deal.

We ask: Why all this effort to keep people’s attention off the underlying business?

We believe that, absent this sham buyout offer, shareholders are holding a company that is a potential 0….yes a 0, as in donut. We believe the company has undisclosed liabilities, as we have seen with companies such as Longtop Financial. Also, even with its limited disclosures, Harbin as a company is far too dependent on lending to support a business with heavy capex burdens, slimming margins, and decreasing revenue.

So now we are supposed to believe that a company, run by a gentleman with a disturbing history of loan misrepresentation, is actually obtaining a signature loan for $400 million, to buy out the publicly held shares at a 40% premium? And this transaction is going ahead in a market environment so rife with skepticism about Chinese stocks and skittish about economic concerns that no Chinese company has sold a bond in the high yield market since May 26?

And this transaction is predicated on the numbers filed by the most notorious discredited auditor in the China space?

And who is the purported lender bank? China Development Bank – a bank who has become too familiar with China stock fraud. They are the lender for the recently decimated Sino-Forest.

Ask yourself if a little professional skepticism isn't warranted here.

We believe that in reality Harbin is a money pit with hidden liabilities that are consuming its cash.

Only a month after the original “takeover announcement”, over six months ago, Harbin’s Chairman executed a $50 million dollar bank loan for the company, collateralized by his personal stock holdings, worth more than double the loan amount at the time.

We ask one simple question: Why? If you really have $55 million in the bank, earning less than 1% interest, would you borrow $50 million at 8% interest if you don’t desperately need the money?

Clearly it's an expensive transaction – the company is paying $1.9 million interest quarterly to service the loan (at 8%), while earning less than $200,000 interest on its free cash balances. And according to more recent filings, they've never used the money. It supposedly just sits in their bank account. (Sorry to be so damn obvious.)

Regardless of what the reason is, it bodes poorly for a company that expects to get financing to go private for a 70% premium to market.

It is not only us that don’t believe the takeover, but obviously Wall Street doesn’t either.

Here is a typical Wall Street risk/arb spreadsheet, showing the difference between the current market price and the proposed takeover price for dozens of deals in process.

Note that these stocks all trade within a few percent of the proposed takeover price. Yet, Harbin has never traded higher than the range of 50% to 70% of its takeover price.

It seems that that the only people who believe this deal could go through are Abax and the very vocal Peter Siris. If you are holding this stock relying on the “easy profit”, look carefully at the track of the group with whom you are riding shotgun.

The purported equity partner for this deal is Abax Capital Management. This crew has no hesitation to name-drop impressive sounding folks such as “Morgan Stanley”. Yet, we have been unable to find even one successful deal they have participated in as a principal. The few deals that have made it into the public domain could best be described as “pathetic”. The founding partners have split up, and we strongly doubt that under current market conditions Abax has any financial muscle to swing this deal.

Ferro China, valued at $240 million when Abax was involved, is now worthless, and in bankruptcy.

These two stories make clear what we’ve summarized above: here and here.

I have discussed tirelessly the vocal Peter Siris. A review of his fund’s filings just makes me wish I had invested money with him…to short everything he buys. Here is a third party article on Mr. Siris and his recent stock market troubles.

To illustrate a final point we’ve made previously about the China space, there’s a tremendous vulnerability for US investors who assume “a stock is a stock is a stock” if it trades on the Nasdaq or the NYSE.

Investors are going to face “mission impossible” when trying to avail themselves of the customary legal protections they assume are available to shareholders, for companies domiciled in China. Here’s a news story about one of the early civil shareholder suits, which can’t even get papers served on defendants domiciled in China. Buyer beware.

For those of you who do not read us, yesterday another China coverage stock was halted: China-Biotics (NASDAQ:CHBT). How long until Harbin faces the same fate?

We have hundreds of pages of SAIC documents – the in-country filings of Harbin’s subsidiaries over the years. These documents do not even remotely resemble the company that Harbin portrays to US investors in its SEC filings.

But needless to say, we think no bank in China or anywhere else would dream of relying on Harbin’s SEC filings, generated by a disgraced auditor, as a basis providing hundreds of millions of dollars in high-risk financing to fund a huge premium to pay off US investors.

We see no reason to drown readers in paperwork to prove a fraud that is too obvious. If need be, we will continue to publish information on a timely basis that we find is relevant to investors.

Cautious investing to all.

Citron Research
6.15K Followers
Andrew Left's Citron Research (http://www.citronresearch.com/) (formally known as Stocklemon.com) seeks to expose companies whose management is in some way misleading investors. Left digs into SEC filings, financials, management histories and other data to uncover such situations, and he is usually short the stocks he writes about. Mr. Left has been publishing for 7 years and has created a track record that is unrivaled in short selling. Mr. Left has been cited in Barron's, Wall St Journal, CNBC and other major publications repeatedly for his work. Mr. Left was also an invited speaker at the reknown Master Investor Conference. Visit: Citron Research (http://www.citronresearch.com/)