For several reasons, oil company stocks tend to have perpetually low earnings multiples. The price of their commodity product is volatile, their business is capex intensive, their asset base and capabilities are more important than their income in any one year, they're cyclical (resulting in especially low valuations during high periods) and they face a variety of worldwide risk.

The downside is that sometimes misleadingly low valuations can be bear traps. Smart money stays away from the top of a cycle, when earnings multiples are often at their lowest. The upside is that when cash is available and the management is willing, share repurchases can be fairly lucrative. Shares can be purchased at such a large quantity, that a meaningful percentage of market capitalization can be repurchased annually.

Share repurchases can make a good supplement to dividends when it comes to returning cash to shareholders, because the tax situation is better and it fuels future dividend and EPS growth. The potential abuse is that share repurchases can be performed for the wrong reason or at the wrong time: to boost company metrics and executive performance ratings.

This article showcases how XOM has returned cash to shareholders over the years. Between 2000 and 2010, the company reduced their number of outstanding shares by repurchasing and converting them to treasury shares.

Over this 10 year period, XOM reduced the number of outstanding shares considerably (and this includes the stock transaction for XTO). 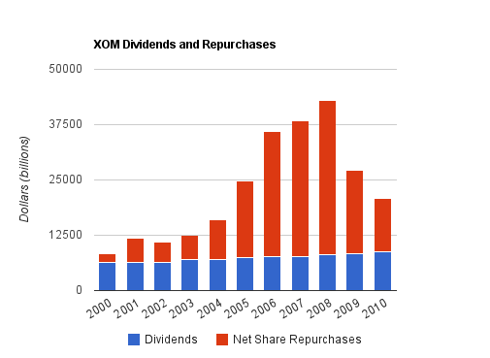 The above chart shows the combined total value of dividends and share repurchases for each year. 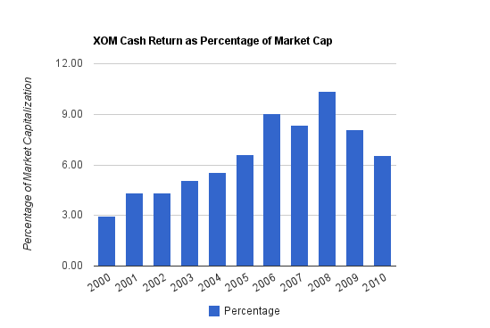 The above chart shows the sum of dividends and share repurchases, as a percentage of the market capitalization during the year, for each year in the period. XOM sent anywhere between 3% and 10% of its total market cap back to investors each year.

Overall, while I'd prefer XOM's yield to be an extra percentage point higher, I think XOM's steady and disciplined approach to repurchasing shares year after year combined with their dividend has resulted and likely will continue to result in reasonable long-term value creation for shareholders.

Disclosure: I am long XOM.

Dividend Monk
1.94K Followers
My name is Mike McNeil and I’m the author of The Dividend Guy Blog along with the owner and portfolio manager over at Dividend Stocks Rock. I earned my bachelor degree in finance-marketing, own a CFP title along with an MBA in financial services. Besides being a passionate investor, I’m also happily married with three beautiful children. I started my online venture to educate people about investing and to be able to spend more time with my family. I used to struggle with the same issues millions of small investors deal with on a daily basis. Which stocks to buy? When to sell them? How to find the time to manage my portfolio? How to diversify? I wasn’t into dividend investing until I looked in depth at my portfolio returns and realized I was having difficulty keeping up with the market. The root of the problem was a very poorly built portfolio that lacked structure and the components required to build a sturdy base. I made good money from the stock market but I was taking unnecessary risk to achieve my investing goals. From that point on, I was determined to create a portfolio strategy that would allow me to benefit from dividend growth stocks as a solid foundation. Since then, I manage my portfolio with a stress free method that enables me to cash out dividend payments even when the market goes sour.