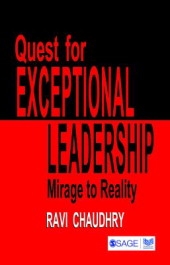 corporate executives in years, "Quest for Exceptional Leadership: Mirage to Reality," (Sage 2011.) Chaudhry, who heads CeNext Consulting and Investment in Delhi, takes a global, long-term look at our rapidly evolving societies and their economies. He sees the crises of Western finance in 2007-2008 as a turning point that can lead to positive change.

Chaudhry maps the contours of the new movements within finance to re-shape the architecture and rewrite the rules for business success: from new curricula in business schools to new metrics beyond failing models of asset valuation, risk analysis and conventional accounting to overhauling national accounts beyond GDP to more realistic measures of sustainability and progress. He focuses on seven key groups of change agents now leading the charge. Chaudhry sees all these changes as based on a new realism – included in earlier doctrines and longer-term models devised for an earlier time in our history. He terms as "mirages" the economics of short-termism adopted by many CEOs and corporate boards, as well as asset managers, trustees of institutional investments. He points out that many politicians are still operating under these mirages and control the debate and reporting in commercial mass media.

Chaudhry's call for exceptional leadership is that based in the new realities of our multi-polar world – beyond the trite formulas of the business and financial media and recipes of many consultants for short-term success. We in the West need to take off our cultural blinders and hear what the many brilliant new voices from India, China and Brazil are saying. Chaudhry comes out of an Indian tradition based on longer time horizons, suffused with religious traditions of Hinduism, Buddhism, Islam, Zoroastrianism – all rooted in values beyond the money coefficients measuring Western success. Such mind-stretching perspectives may require asset managers and day-traders to take a deep breath, slow down and exercise a different kind of self-discipline.

Why should traders and asset managers expand their awareness of these unfamiliar business models? So as not to be blind-sided by the next social networking success after LinkedIn (LNKD) and the Angie's List IPO or the "wikinomics" models described by Don Tapscott, now changing old multi-nationals like IBM from within; or the open-source models of Red Hat and the new "Wealth of Networks" we cover at Ethical Markets Media (USA and Brazil).

These unfamiliar business models presage the next evolution in economies and finance, summarized at our expert meeting in 2010 and our statement on Transforming Finance. Asset managers are constantly searching for new asset classes: for example, forests, agricultural land in Africa and other emerging economies. We are all seeking beyond ETFs in commodities now oversold; markets in carbon offsets that are rigged and as sovereign debts move into uncharted waters. Many business models based on externalizing costs to taxpayers and society are being unmasked. The Information Age is still morphing into the new Age of Truth as I have predicted. Ravi Chaundhry is one of the new voices showing new ways ahead.

Hazel Henderson
239 Followers
Hazel Henderson D.Sc.Hon., FRSA, is the founder of Ethical Markets Media, Certified B Corporation and producer of its TV series. She is a world-renowned futurist, evolutionary economist, a worldwide syndicated columnist, consultant on sustainable development, and author of The Axiom and Nautilus award-winning book Ethical Markets: Growing the Green Economy (2006) and eight other books. Her editorials appear in Wall Street International Magazine and many other media partners, including Other News, and her book reviews appear on SeekingAlpha.com. Her articles have appeared in over 250 journals, including (in the USA) Harvard Business Review, New York Times, Christian Science Monitor; and Challenge, Mainichi (Japan), El Diario (Venezuela), World Economic Herald (China), LeMonde Diplomatique (France) and Australian Financial Review. Since becoming a full-time media executive in 2004, Hazel has stepped down from many of her board memberships, including Calvert Social Investment Fund (1982-2005), the Social Investment Forum and the Social Venture Network. She has been Regent's Lecturer at the University of California-Santa Barbara, Horace Albright Chair in Conservation at the University of California-Berkeley, and advised the U.S. Office of Technology Assessment, the National Academy of Engineering, and the National Science Foundation from 1974 to 1980. She remains on the International Council of the Instituto Ethos de Empresas e Responsabilidade Social, Sao Paulo, Brasil; serves on the Program Council of FORUM 2000, Prague, Czechoslovakia, founded by the late President Vaclav Havel; is a World Business Academy Fellow; an active member of the National Press Club (Washington DC), and a member of the Association for Evolutionary Economics. She is an Honorary Member of the Club of Rome. She shared the 1996 Global Citizen Award with Nobelist A. Perez Esquivel of Argentina. In 2007, she was elected a Fellow to Britain’s Royal Society of Arts, founded in 1754. She leads the Transforming Finance initiative, created the Green Transition Scoreboard®, co-developed with Calvert the GDP alternative renamed the Ethical Markets Quality of Life Indicators, co-organized the Beyond GDP conference for the European Commission, and funded three Beyond GDP surveys, finding strong support worldwide for ESG metrics in national accounting. In 2010, 2012, 2013, and 2014, she was honored as a "Top 100 Thought Leader in Trustworthy Business Behavior" by Trust Across America. In 2012, she was honored with the Reuters Award for Outstanding Contribution to Development of ESG & Investing at TBLI Europe. In 2013, she was inducted into the International Society of Sustainability Professionals Hall of Fame.  Her 2014 monograph, Mapping the Global Transition to the Solar Age, published by ICAEW and Tomorrow’s Company, UK, is available for free download from www.ethicalmarkets.com.