YPF Sociedad Anonima (NYSE:YPF) is an Argentina-based integrated oil and gas player and the country's biggest energy company. It operates in about 70 oil and gas fields with proven reserves of over 500 million barrels of oil and over 2000 billion cubic feet of gas. 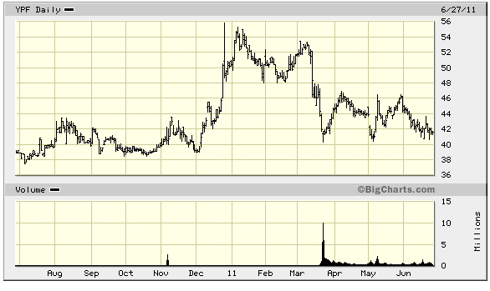 What’s interesting is that as recently as 2 quarters ago, this stock was only reported by 11 13F filers whose holdings amounted to less than $6BN of the company’s $17BN market cap: 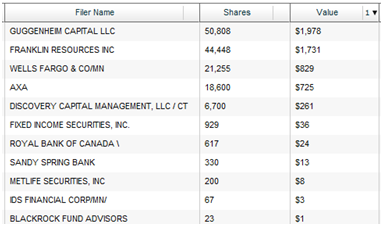 As of the Q1 2011 filing, however, we see that a number of prominent hedge funds have rushed into this stock. Below is a list of the top 15 filers as of Q1 2011 with their holdings over time (). As you can see, this stock was only recently discovered by the hedge fund community:

Eric Mindich’s Eton Park Capital Management made a big entry into it at the end of 2010 and held $435M as of Q1 representing its 3rd largest position:

Clearly the hedge fund community is seeing value in YPF Sociedad Anonima. The company currently pays approximately an 8.3% dividend (which is up significantly in recent days on a stock selloff), has a forward P/E ratio of 9.13 and an Enterprise Value/EBITDA ratio of only 4.86.
Now might be the right time to take advantage of a market selloff to pick up this cheap energy stock with a high dividend and a lot of hedge fund interest.

Cambridge Fund Research
99 Followers
AlphaStratus is a leading provider of 13F software that gives investors the data and tools to efficiently and comprehensively analyze 13F information. Transparency among hedge funds remains poor making it more important than ever for investors to leverage available sources of information to extract the intelligence necessary to make informed decisions. AlphaStratus serves hedge funds, fund of funds and family offices. Visit AlphaStratus.com or email info@alphastratus.com for more.