There are day trades, swing trades and trades that are months in the making. Ever since Polaris Industries Inc. (NYSE:PII) printed a knockout Q1 in mid-April, IPI has been delving deeper into the continued growth prospects for this formidable maker of all-terrain vehicles. In our opinion, PII is about to pull the throttle on the gas and rev up to new all-time highs, even amidst this difficult market terrain.

In addition to a couple of recent upgrades and strong dealer surveys from the likes of Wedbush, Sidoti, and Citigroup (C) over the past six weeks, IPI believes new institutional investors will soon take a more aggressive position in Polaris for one very important reason: Since 2005, PII has demonstrated a remarkably consistent trend of revenue and earnings growth from its first quarter through its second and third quarters, a trend which, suggests a high probability for a good beat in Q2, and more importantly, a big raise in estimates for Q3 and guidance for the remainder of the year.

In our efforts to gain high-conviction on this trade, IPI dug into the Polaris’ 10-Qs dating all the way back to 2005. In doing so, we emerged even more bullish on our thesis. Let’s discuss.

To begin, let’s take a look at Polaris’ historically weak first quarter. From 2005 to 2010, Polaris’ Q1 earnings have on average represented 12.62% of the company’s entire earnings for each respective year. Examine the stats:

Now Polaris’ 2011 Q1 numbers were nothing short of stellar, with EPS climbing 127% year-over-year to $1.34 a share. If we consider that 2010 saw PII’s Q1 earnings contribute a meaningfully higher percentage of the company’s overall earnings, at 17.5%, we estimate Q1 2011 will ultimately improve upon last year’s rate, potentially representing 20% of the company’s full-year earnings. It is difficult to tell. While this may come across as guesswork, we feel it is better to assume the percentage moves higher than the six-year historical average of 12.62% - especially when we account for management’s remarks on the Q1 earnings release:

This is where things get interesting. While it is difficult to determine exactly what percentage of earnings Q1 will ultimately represent, our research into Polaris’ sequential trends between Q1 to Q2 and Q2 to Q3 of each fiscal year suggests an even more bullish scenario than $6.70 for 2011. Let’s move to these historical trends now.

If there is an obvious trend for Polaris over the past six years, it is this: business improves dramatically between Q1 and Q3. Observe the substantial jump in sales and earnings from Q1 to Q2 and then to Q3 in each of these years (click charts to enlarge):

The following facts are notable:

While these two potential negatives must be taken into consideration, we believe analysts' recent strong channel checks should spur higher-than-expected sales in Q2 and allow PII to book another beat on both the top and bottom line. After all, if Polaris was able to improve sales 49%, year-over-year, in Q1, logic dictates the company should be able to grow sales at least 30% year-over-year in Q2, even in a sluggish economy. Polaris is the undisputed ATV market leader. The company is gaining share. It is difficult to conceive company sales would decelerate to the current consensus estimate of 27% year-over-year.

We should, however, keep in mind Polaris has become a much larger company in the last 6 years. So let’s assume this type of growth cannot be expected to continue going forward. In this instance, we use last year’s Q1 to Q3 earnings trend as a guide for 2011. In 2010, earnings jumped by 91% from Q1 to Q3. Should a similar boost happen again in 2011, it would imply that current estimates of $1.59 a share for Q3 are just way too low. Assuming Polaris can register even a 75% jump in its earnings rate from Q1’s EPS of $1.34, this would result in a Q3 EPS of $2.35, 48% higher than current analyst estimates.

One final note. PII’s chart is a picture of technical strength. After gapping higher above $100 on Q1’s huge beat, Polaris has spent the past ten weeks basing between $98-$115: 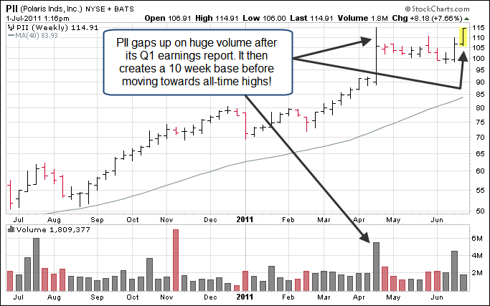 Should we be correct on our call for a decent beat in Q2 and a marked increase in guidance for Q3 and the rest of the year, Polaris could very well embark on another substantial up-leg. If the company can earn close to $7 this year, it would seem reasonable that the company could do $8.50-$9 in 2012. Put a 17X multiple on those forward numbers and you get a $148.75 stock by year-end, upside of 34% in six months.

If we are wrong, we will exit the trade after earnings are release on any breach of the stock’s 50-day SMA of $104.46. From a risk/reward perspective, there is a 4 to 1 upside vs. downside scenario playing out in this trade. While any earnings trade is ultimately a gamble, here at IPI, we think the probabilities are stacked in our favor.

Disclosure: I am long PII.

John Henderson
1.91K Followers
I am a prop trader specializing in identifying pivotal inflection points in both a company's results and, concomitantly, in their stock prices.
Follow
2 Comments