As we near the end of the seasonal dog days for the gold stocks (March to August) I am interested to see if one of the biggest dogs of them all comes to life this fall. This stock has fallen from $90 in the late '90s to the $3 to $5 range now. It is the Edsel of the gold producers, even though in 2005, when the stock first hit the basement where it now resides, it was the 10th largest gold producer in the world. Still, it has been slammed, cursed, hated and sold by any shareholder with a heart worth breaking.

I am referring to DURBAN ROODEPOORT DEEP or DRDGOLD (DROOY) for short - or as I like to call it, Dreary Ban, after its dreary stock performance of the entire gold bull market. This stock was a darling in the first few years of the gold bull. But some class action lawsuits alleging overly optimistic reporting by management and a slew of bad press quickly turned the stock into a dog that has been kicked the rest of the way along the gold bull's path. This has occurred despite a very strong return to positive financial results to the point where, today, the stock carries a price/cash-flow ratio of just 3.3 along with a price/revenue of just 0.5 and a PE of 11. DRDGOLD is the fourth largest gold producer in South Africa, which has been the largest gold producing nation in the world for a century, although it competes closely with China now for that title. You don't hear much about DROOY in conversations about the big players of gold mining, but Wikinvest ranks this unhedged company fourth in its list of companies that benefit from the rising price of gold - right behind Barrick (ABX), Newmont (NEM), and AngloGold (AU). About all solvent, producing miners with a PE of any kind have enjoyed a ride higher over the last six or eight years. But DROOY The Dog has slumped into the dreary basement: 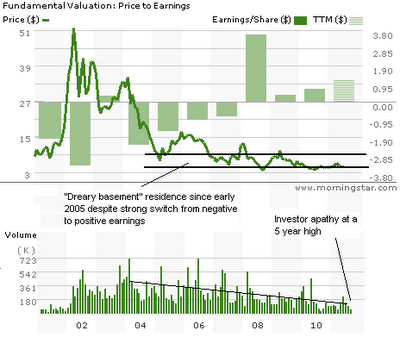 There are many explanations for this disconnect with its fundamentals, one of them being the conspiracy theorist's approach. Clif Droke wrote a piece over at Safe Haven about DROOY back when the stock first landed in the basement shown above in 2005. He noted that the stock wasn't getting hammered by every bit of bad press anymore, and that he was thinking some kind of long-term bottom was beginning to form. He invoked the skeptical view expressed by a lawyer, Franklin C. Keyes in a 1904 address to give a possible explanation of DROOY's behavior. Keyes suggested that when heavily moneyed interests want to grab up shares, they bad mouth the stock and force the poodles (retail investors) to turn loose while they fight the other big dogs for the stock. To quote Mr. Keyes:

"Did you ever see two big bull dogs fighting furiously over a bone? Well, they remind me of the insiders fighting, or 'gunning,' for one another's stocks. The bull dogs growl and snarl and snap and bite at each other, and perhaps some little poodle becoming mixed in the fray gets snapped clear in two, and the big dogs in their ferocity never know it at all. They, of course, are after the bone, but it is the last of the little poodle just the same."

In his 2005 article, Clif Droke speculated that these dogs may have been what turned DROOY into a dog.

Is it possible that the explanation of the quick, sharp, downward activity in the stock of Durban Deep earlier this year (most notably in April) was a result of such a "battle of the giants" among various interests (those familiar with the S.A. mining scene can probably guess the names involved)? Was this shake-out we witnessed not long ago a classic case of the insiders "gunning" for control of some aspect of the company or its stock? And why hardly anyone commented on Durban recently in light of the spate of news? Could it be that a large number of "poodles" were "snapped clear in two" by the previous decline and no longer have investment interests in DROOY? In the first part of 2005 there were numerous suggestions in analysts' research reports that DRDGold would shut down all its South African operations and many rumors circulated to the effect that the S.A. gold mining industry was in a "terminal long-term decline." This kind of talk is typical at longer-term bottoming processes

The poodles seem to be clearly snapped in two as this stock shows the signs of an abandoned investment. And a "longer-term bottoming process" is clearly what seems to have transpired since 2005. Its current technical condition could best be described as "limbo." 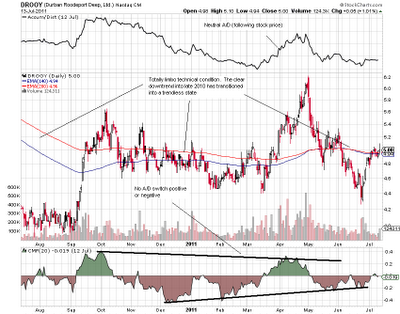 The stock hasn't followed the miners' movements very well, drifting lower throughout most of 2010 while the HUI index did a nice climb. Only lately has DROOY started twitching a finger promising an escape from the coma. Last September saw a brief rally along with the miner group as well as this March. But it is still a technical basket case while being a valuation marvel. It is certainly one to keep a close technical eye on. I wouldn't buy it until it gets its 140/200 ema moving average act together, unless you want to accumulate it and perhaps be a poodle for awhile.

Bruce Pile
870 Followers
I run a model fund at Ken Kam's Marketocracy, where they do capital management using the best member mutual fund track records with extensive tabulations of alpha, beta, R-squared, and many other fund management evaluations. Marketocracy Capital Management offers SMA (Separately Managed Accounts) through FOLIOfn Institutional ($100,000 minimum accounts) set up to track the top 15 or so long-term track records (many 12 years plus) of the 30000 or so active members that run models at their site. My fund is one of those top models available for SMAs. My SMA investment fund now has a first year performance with double digit alpha. You can see the fund's performance chart at marketocracy.com (the Turtle Fund - symbol BPMF) and there is one in my profile over at TalkMarkets. My fund methodology is high diversification, usually running around 40-60 stocks from many different sectors. I rarely weight any position much over 5%. I began at Marketocracy developing an analysis method I've labeled The Fractal Base Flow Model. I've been experimenting with variations of my basic methodology with 4 other funds and a 5th where I try new things. With my first and main model fund BPMF (Bruce Pile's Mutual Fund) I did my basic method for the first 7 years or so with an alpha over 30, then strayed a little into other analysis methods that did not work as well. For the SMA, I am using the methods proven to work well. Marketocracy is a new way of investing that solves a lot of the problems in the industry. Most hedge funds are dangerous. The sad result of all this danger is that most hedge funds fail. The average life of a hedge fund that makes it past the first year is just 5 years. More than two thirds of all hedge funds that ever existed are now gone. There is the fund of funds option, but the high turnover means that even they must select an all new portfolio of funds about every 5 years. They are complex with large fees.Imagine a place where you could go to sign up for an account where you could review track records and styles and risk levels of not just one guy, but up to 15 or so, and check on your account signup form how you want to spread your money among these guys. And imagine that all these managers have had to compile top ranked hedge fund performance levels for up to 15 years under the safety level of SEC rules for mutual funds. And imagine you could get all this at roughly cost of a mutual fund. It would be like opening an account and checking the names of Peter Lynch, Warren Buffett, or all your favorite hedge fund managers to gang tackle your investment objectives. Well there is such a place - Marketocracy Capital Management. Here, thousands of people from all walks of life, compete online with virtual funds. If your track record qualifies, you can open a GIPS account for real customer money tracking of your model fund. My fund is one of those, ticker BPMF, which you can invest alongside with your own SMA account. They buy and sell for you. This can be a regular brokerage account, Roth IRA, or anything that best fits your needs. It's your own bank account with no trust or fraud issues as with hedge funds. To look into this, you can email Ken Kam at ken.kam@marketocracy.com or phone 1-877-462-4180.