MLPs focus on energy infrastructure such as pipelines, refineries, oil and gas storage and transportation. They tend to be involved in businesses that generate predictable cashflow, and as a result their distributions to investors are similarly consistent.

Although MLPs operate in the energy sector they more resemble a “toll” business model in that their results are dependent on the volumes of product gathered/shipped/stored/refined, so the price of the oil or natural gas they’re handling is of secondary importance. MLPs are most appropriate for income seeking investors willing to tolerate risk similar to high yield bonds.

The risks can be worth it though – MLPs have outperformed stocks, bonds and REITs over most timeframes, as the chart below shows (click to enlarge images): 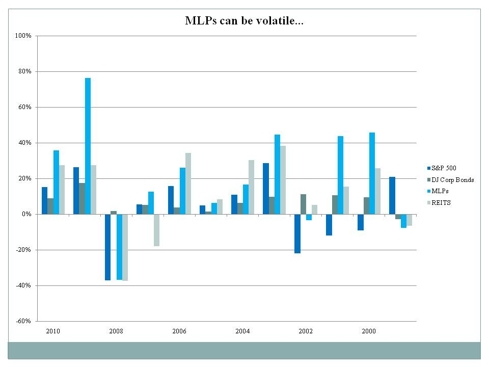 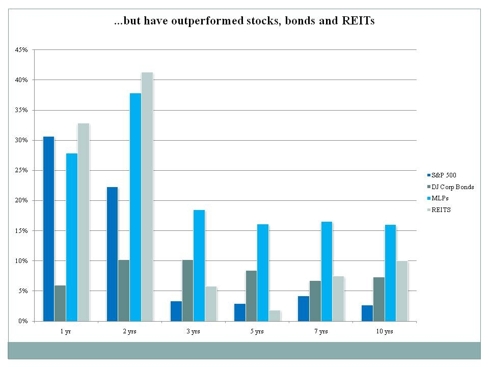 The asset class was created through the 1986 Tax Reform Act under President Reagan. The intention was to attract capital to energy infrastructure, and in that regard it was a successful piece of legislation. The market cap of MLPs is currently around $235BN.

Distribution yields on MLPs are currently around 6%, and historically they have grown their distributions by a further 6% through price increases and improved operating efficiency. That adds up to a 12% long term return if past distribution growth continues. That’s much more attractive than high grade bonds, although MLPs are more volatile.

MLPs also have built in inflation protection. In many cases the assets they own are regulated by the Federal Energy Regulatory Commission (FERC) which controls annual price increases. This is to prevent the owner of a pipeline who may have a monopoly on transporting oil between two points from gouging captive customers. Price increases are pegged to the PPI, so if inflation picks up it feeds right back through their revenues. Because of this oil pipelines were recently allowed to pass through an annual tariff increase of 6.9% as of July 1.

But MLPs are partnerships not corporations, and that’s probably most of the reason their yields are 6% and not closer to the 3-4% found in bonds or REITs. They’re “pass-through” vehicles, which means that they pay minimal or no corporate income tax. This avoids the double bite that taxes take out of dividends, in that corporations pay tax before distributing part of their after-tax income as dividends to their investors, who in turn pay tax on this income. Investors in MLPs own a proportionate share of the underlying assets rather than shares in a corporation.

The tax consequence of this is that investors receive a K-1 instead of a 1099 which substantially reduces the pool of potential buyers. K-1s require more work when you’re filing your tax return, and as a result they’re only appropriate for investors who have an accountant prepare their taxes. While we’re on that topic, nothing in this article should be construed as tax advice, and anyone contemplating an investment in MLPs should talk to their accountant first.

Because MLPs depreciate their assets but don’t use the write-off against their taxes, the tax benefit passes on to their investors (commonly called unitholders since they own LP units in a partnership rather than shares in a corporation). Consequently, in many cases MLP distributions are classified as a return of capital (rather than a return on capital) which greatly reduces the amount of taxable income an individual needs to report. It turns out to be a tax deferral, because the amount of the distribution not taxed as income reduces the cost basis of the investment. Income tax is assessed from this reduced level when the units are sold. 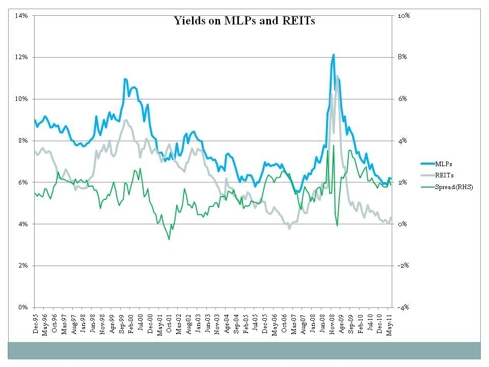 I’ve been investing in MLPs for many years, and in my experience the K-1s are worth the trouble. It’s not easy to find investments yielding 6% nowadays, and tax deferred yields at that level are even less common. Over time MLPs have handily outperformed the major asset classes. But a bear market in MLPs is seldom fun, and when they fall they can fall fast. Because they are mainly bought for yield, rising bond yields can depress MLP prices. But they are equities (MLPs issue debt, but that’s not nearly as interesting), and falling equity markets can hurt MLPs as well. In 2008 the Alerian MLP Index was down 37%. Sitting tight was the right decision back then as with most things, since the index roared back to deliver +76% in 2009. Nonetheless, while 2008 was clearly exceptional, MLP investors should be prepared for price drops of 10% or more.

There’s always the risk that their favored tax status could be removed as Congress searches for new sources of revenue. Occasionally this issue receives attention in Washington, but legislators have historically acknowledged the vital role of energy infrastructure to the economy. Impeding capital formation by raising taxes has never gained much support, and the industry trade group the National Association of Publicly Traded Partnerships (NAPTP) is an effective lobbyist in favor of the status quo.

I regard them as a fixed income asset, albeit with more risk than high grade bonds. The best way to access MLPs is through direct investments in a diversified portfolio of names (10-15 is sufficient). There are a growing number of ways to invest in MLPs through ETFs, closed end funds and exchange traded notes. These products all have the advantage of replacing the K-1 with a 1099, and the disadvantage of losing the tax deferral benefits and in some cases incurring additional taxes. While they might be appropriate for investors with $100,000 or less to invest, high net worth investors will probably find it worthwhile to invest directly rather than through any of these vehicles.

In the current environment MLPs look particularly attractive for the taxable investor seeking a tax deferred yield and willing to receive K-1s instead of 1099s. Bond yields are low – punitively low. Probably the most common point of agreement in investing today is that bonds are unattractive, and yet ten year treasury yields remain stubbornly anchored around 3%. While the next round of quantitative easing (QE3) is not imminent, miniature bond yields and virtually invisible short term rates don’t appear likely to change in the foreseeable future. Holding out for higher bond yields might make sense, but current economic trends are inauspicious. 6% MLP distribution yields are better than the fixed income alternative.

Meanwhile equities always appear risky, and the list of macro concerns includes the unfolding Euro sovereign crisis, gamesmanship over the U.S. debt ceiling, slowing growth, the Arab Spring and Chinese inflation. There are no doubt others. Yet while there’s always the possibility of at least a 10% drop in equities, which would depress MLPs as well, we think stocks are an attractive investment and much more so than bonds. The spread between the earnings yield on stocks and ten year treasury yields is at historically wide levels, and corporate profit growth remains strong.

We think this attractive relative valuation will provide ongoing support to stocks in the event that any of the macro issues above causes concern. 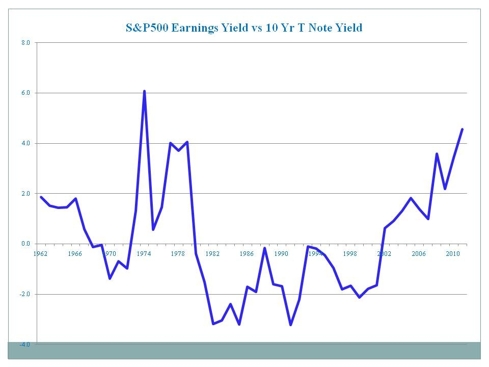 MLPs are also a nice diversifier most of the time as the table below shows. However, back in 2008 low correlations didn’t help much – fat tails effect MLPs too.

MLPs are sometimes compared with REITS, which are also favored by yield seeking investors (though REITS issue 1099s not K-1s). REITs have performed well this year, returning around 10% compared with 6% for MLPs. As a result, MLP distribution yields are around 2% higher than REITS. The differential has been wider, but this is still around 0.5% greater than the average going back to December 1995 (as far back as available MLP data permits).

So while we think MLPs are a sound investment for most portfolios, we think current valuations and the dearth of attractive alternatives make them particularly compelling right now. SL Advisors runs an MLP strategy and we’d be happy to discuss it in more detail.