It is still very early in the new year, but I cannot help notice the relative strength exhibited by iShares Trust - iShares U.S. Home Construction ETF (ITB) and several major home builder stocks. ITB is up 2.5% for the year and closed at a 10-month high on January 8th. The S&P 500 (SPY) is essentially flat for the year and just off its all-time highs. 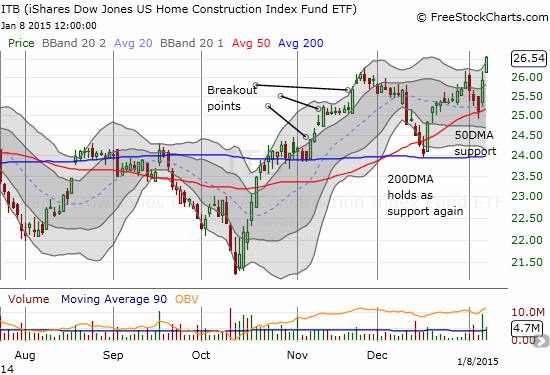 ITB is off to a strong start for the year

ITB traded down with the market to start the year, but on January 7th ITB raced off apparent support at its 50-day moving average (DMA) with a soaring 3.3% gain. For reference, the S&P 500 gained 1.2%. Volume for ITB was unusually strong: the 9.2 million shares traded were 2.6 times higher than the average over the last 3 months. This is the kind of trading action that can launch a sustained rally.

The strength seemed to come courtesy of a proposal from President Obama to reduce a loan insurance fee from the Federal Housing Authority (FHA). However, given the varied response across the stocks of individual home builders, I think the news provided more of an excuse than a true driver. Before I make this case, here are the elements of the proposal that are supposed to provide a boost to the housing market according toquotes from Bloomberg:

I am putting aside the political opposition to the proposal as I cannot disentangle the potential impact or outcomes from the political process. However, I am wary about a model that claims such a large benefit over such a small cost savings. If the difference between buying a home or not is $2700 over three years, it is likely the FHA is targeting very marginal buyers, not the type of buyers home builders in general have targeted (so far) in this housing recovery.

President Obama spoke at length about the policy in Phoenix on January 8th. The President delivered an admonition that people should NOT use this fee deduction to buy a home that they cannot afford. I would argue that the folks making a decision based on this savings alone, or even marginally, are the most likely households buying an unaffordable home. So, overall, I am skeptical that this news about the fee reduction is a primary driver of the out-sized surge in the shares of home builders. To me, it looks more like an "excuse," like the expression of hope that this is the beginning of a new, positive turn in the housing market.

The response to the proposal was even more telling after observing the behavior of individual home builders. For example, LGI Homes, Inc. (LGIH), a builder specializing in first-timers in Texas, closed DOWN on January 7th. LGIH's client base should be big beneficiaries according to the rationale provided for the cut in the insurance fee. The stock lost fractionally again on January 8th. Of course, concerns about the economy in Texas in the face of oil's decline are likely putting the brakes on enthusiasm for LGIH (see my "Texas Economy Health-Check: The Housing Market's Challenge From The Oil Patch" for my assessment). These declines are occurring despite LGIH delivering more good sales news in the form of early guidance on January 6th announcing the completion of a "record-breaking" year:

[LGIH] announced an all-time record for closings during a single month with 246 homes closed in December 2014. With closings of 652 homes during the fourth quarter of 2014, the Company finished out 2014 with 2,356 homes closed for the year. This surpasses its previous record of 1,617 home closings for 2013 by 45.7%. The home closings reported for 2013 include those from the Company's pre IPO joint ventures. As of the end of 2014 the Company had 39 active selling communities.

Meanwhile, luxury home builder Toll Brothers (TOL) jumped 2.3% off its 200DMA and completed a full recovery from post-earnings selling a month ago. TOL is the home builder least likely to benefit from the FHA insurance deduction: buyers of TOL homes are paying an average of $757,000. On a side note, this recovery is a great validation of my earlier claim that TOL was a buy into the post-earnings weakness. 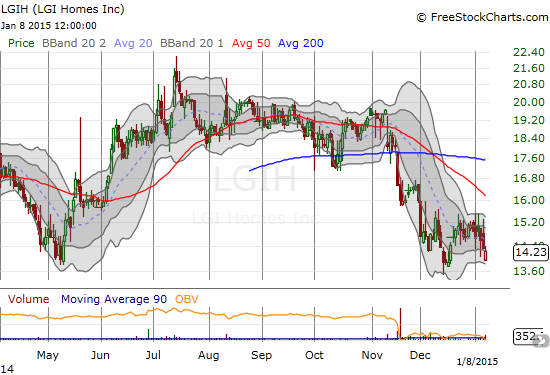 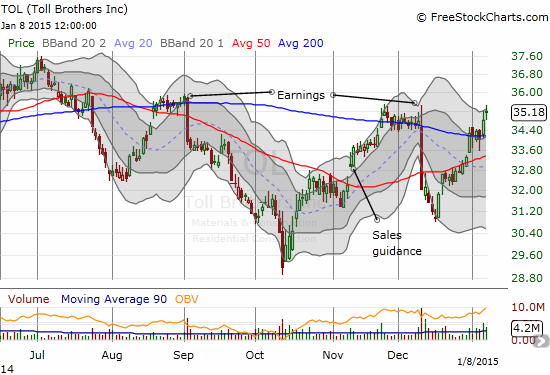 One of the biggest beneficiaries of the bounce on January 7th was Pulte Homes (PHM). Like other rallying home builders, PHM bounced off important technical support; for PHM it was its 50DMA. Volume surged above average as the stock gained a whopping 4.9% on the day. Two other huge beneficiaries were DR Horton Inc. (DHI) - up 5.1% - and Lennar Corp. (LEN) - up 4.9%. Altogether, these three stocks share one interestingly common characteristic: on December 30th, options call volume surged on each of them.

CNBC's show on options trading pointed out the activity with the tantalizing headline "Behind the $50 million bet against home builders." At the time, the host claimed that the action was due to options sellers betting that these stocks would not rally any further off the December low. I am always skeptical of such characterizations because every seller transfers shares to a buyer. Sure, if you can identify that the selling comes from traders hitting the bid side of the spread, such action suggests that sellers are more eager than buyers. But in the end, the buyer is taking on a financial risk and should not be modeled as a passive participant in the trade.

In the case of PHM, the sellers of the call options are taking on a tremendous risk for what I see as little reward. The seller sold 8500 Feb $22 call options for a minuscule $0.50 premium for each option for the pleasure of taking on unlimited risk; the overall call option trading volume was 6x average daily volume. The open interest as of January 7th was 9120. The higher PHM rallies, the more expensive the calls get and the costlier it gets for the seller to extricate him/herself from the trade. The buyer's risk is limited to the $0.50 paid. The seller's risk is only limited by a hedge or offsetting position like shares in the underlying stock.

That pain of being a seller of those calls is now extremely high. PHM closed January 8th at $22.39. In less than two weeks, those Feb $22 call options have already more than doubled! No the seller has to hope PHM stops on a dime at current levels. If the sellers of call options in home builders were unhedged going into this run-up, a rush to get hedged could easily ignite a self-reinforcing upward cycle of buying as traders start following each other's signals.

On December 30th, DHI experienced 4.5x its average call daily volume. LEN experienced a 2.5x increase. I am assuming PHM, DHI, and LEN were the three home builders that were primary targets since the show did not identify any other home builder stocks. It seems that $50M bet AGAINST home builders may actually be a bet ON home builders…or maybe a bearish bet gone terribly awry (for now anyway).

A closer examination of PHM also made me wonder whether this options bet was really against the stock. At the time of the big bet, PHM had rallied a healthy 11.1% after reporting earnings on October 23rd. The stock first really got moving in response to a gap up in sympathy with TOL guidance on November 10th. PHM is not particularly expensive at 1.4x sales and 1.7x book. Most interesting is that shorts have been retreating from the stock for over a year. Current short interest is almost as low as it was back in April, 2014 - just in time for the current breakout. Short interest is now just 4.1% of float (blue line and left vertical axis). 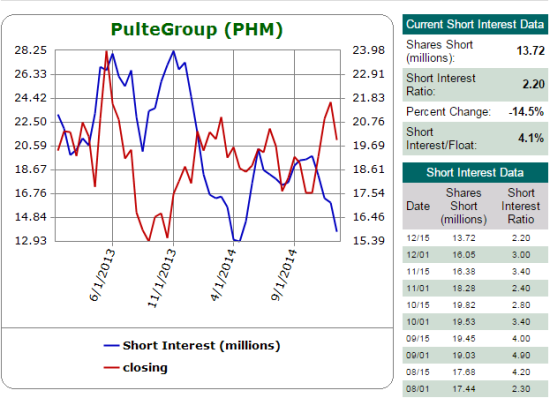 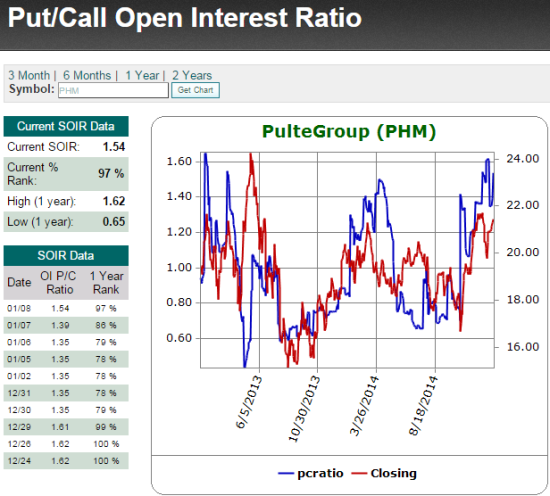 Overall PHM, like other major home builders, is riding high on a combination of favorable technical factors and relatively attractive valuations. Until TOL, reactions to earnings reports from the last cycle were generally favorable and that momentum is apparently continuing into the upcoming earnings season. I have documented in other pieces the macro news that, in my assessment, points to a potential (likely?) breakout in 2015. The first test point is coming soon with the 2015 Spring selling season. Perhaps that $50M bet was actually a big bullish bet that traders would bid up home builders ahead of the results from Spring sales.

Be careful out there!

Ahan Analytics
4.3K Followers
Dr. Duru has blogged about financial markets since the year 2000. A veteran of the dot-com bubble and bust, the financial crisis, and the coronavirus pandemic, he fully appreciates the value in trading and investing around the extremes of market behavior. In this spirit, his blog "One-Twenty Two" (https://drduru.com/onetwentytwo/) delivers a different narrative for students and fans of financial markets. Dr. Duru challenges conventional market wisdoms and offers unique perspectives. The blog posts cover stocks, options, currencies, Bitcoin, and more, while leveraging the tools of both technical and fundamental analysis for short-term and long-term trading and investing. Some of these ideas and analyses are also featured here on Seeking Alpha.Dr. Duru received a B.S. in Mechanical Engineering (and an honors degree in Values, Technology, Science and Society - now simply STS) from Stanford University. For graduate studies, Dr. Duru went on to earn a Ph.D. in Engineering-Economic Systems (now Management, Science, and Society). Dr. Duru's work experiences include:*Independent consulting in operations research and decision analysis*Management consulting in product development and technology strategy*Price optimization software for computer manufacturers and internet advertising (including a shared patent for methodology)*Business Intelligence and Data Analytics, including some Data Science and Data EngineeringConsulting practice: https://ahan-analytics.drduru.com/
Follow

Disclosure: The author is long ITB, TOL, LEN, LGIH, DHI. The author wrote this article themselves, and it expresses their own opinions. The author is not receiving compensation for it (other than from Seeking Alpha). The author has no business relationship with any company whose stock is mentioned in this article.