The Bancorp (NASDAQ:TBBK) is a Philadelphia area bank founded in 2000 by the pioneering banker and lawyer Betsy Z. Cohen. A few bullet points from her resume:

Since inception, the bank's Chairman has been her son, Daniel G. Cohen. A few bullet points from his resume:

2014 was a bad year for The Bancorp as the bank was rocked by a series of surprise accounting and regulatory disclosures resulting in a 50% drop in its stock price. 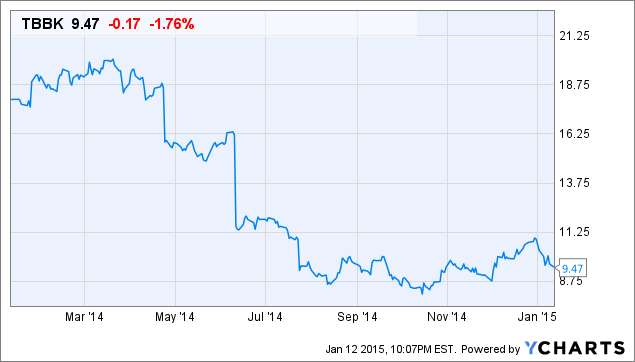 Then there was a June 10, 2014 8-K disclosure that the FDIC found that bank was in violation of the Bank Secrecy Act -- namely that reloadable prepaid cards issued by The Bancorp were being used for money laundering. The next trading day the stock dropped 30.3% from $16.36 to $11.40.

In its Q3 2014 10-Q, the bank announced that was discontinuing it commercial lending operations. Based on an independent third party review, it marked down the portfolio by an additional $38.9M to a fair market carrying value of $1.2 Billion:

Here is a Q3 2014 conference call exchange, as transcribed by SA, confirming the view of $82.9M as the difference between the outstanding principal and the fair market carrying value of the portfolio at that time.

Paul Frenkiel- Chief Financial Officer
Sure. Yes, those actually are separate, so maybe the easiest, I think the way you are trying to look at it was that at the end of the second quarter we had a reserve of about $46 million. We had some activity during the quarter, so we ended up with the reserve about $44 million and $38 million was basically in addition to that.

Matthew Kelley- Sterne Agee
Got you. So we can really think about it as an $82 million write-down or 7% or 8% of the unpaid principal balance. Is that the right way to think about it?

Paul Frenkiel - Chief Financial Officer
By 38 in addition to the 44 that had accumulated over a period of many years.

On the next to the last business day of the year, December 30, 2014, the bank issued an 8-K stating that it had sold a portion of its $1.2 Billion commercial loan portfolio:

The sold loan portfolio had an outstanding principal balance of approximately $267.6 million, which had been adjusted on the books of the Bank to estimated fair market value in the third quarter of 2014 upon the classification of the Bank's related commercial lending operation as a discontinued operation and the transfer of the related portfolio to "held for sale" status. As a result of the estimated fair market value adjustment, the carrying value of the portfolio, as of September 30, 2014, was $213.5 million.

Several things about this first sale caught our eye. The first thing was the mark-to-market discount associated with this relatively small piece of the portfolio:

This was way out of line with the overall average discount of 6.5% established just two months earlier.

Second, the sale was not for cash nor to an established third-party. It was for note receivables issued by a newly created LLC with the bank itself as 49% minority partner.

We ask ourselves, "How toxic can the full portfolio really be if this is what the bank had to do to sell just a portion of it?"

Maybe, they planned on an asymmetric sequence of sales, with the very toxic piece cut out first and sold to a related party at a steep discount.

Then they would sell the remaining clean piece with a mark-to-market discount of only 3% to an established third party willing to pay cash for a clean bundle.

But if this were so, why did The Bancorp not include an explicit statement in the late December 8-K of the planned asymmetric sale sequence?

Investors need to get straight answers to the following questions now or during the bank's Q4 2014 earning conference call scheduled after the close on January 29, 2015:

Below is a spreadsheet summarizing our view of the accounting of the two transactions to set aside the commercial loan portfolio in Q3 2014 and then to sell the first piece on December 30, 2014.

It also includes a "what if analysis?" as to future mark-downs of the remaining portfolio for sale