When the lockup period ends for Catalent, its pre-IPO shareholders, directors and executives will have the chance to sell their 74.8 million shares. The potential for a sudden increase in shares available in the open market may cause a significant decrease in the price of CTLT and open a short opportunity for savvy investors.

Catalent operates its biotechnology, pharmaceutical and consumer health businesses across five continents, in more than 100 markets, and its clients include 48 of the top 50 pharmaceutical companies and 41 of the top 50 biotech firms. They employ over 1,000 scientists, and their global sites package or manufacture more than 100 billion units yearly. They hold over 1,200 patents and patent applications.

For further details, see CTLT's S-1 filings, along with our prior articles here and here.

Catalent reported the following financial highlights for the fourth quarter:

Catalent faces competition both globally and domestically from other firms in the biotechnology, pharmaceutical and consumer health products and services sectors. They operate in North America, South America, Europe, and the Asia Pacific region, and major competitors include PPD Development, Hospira, Covance, Praxel, and LabCorp.

At present, given CTLT's market performance (see below), the competition is not dragging down the firm, perhaps bolstered by solid management.

President and CEO John Chiminski has served in his position since March 2009. Prior to joining Catalent, Mr. Chiminski held positions for over 20 years at GE Healthcare in operations, engineering and senior leadership roles. From 2007 to 2009, he was President and CEO of GE Medical Diagnostics. Mr. Chiminski holds a BS from Michigan State University and an M.S. from Purdue University, both in electrical engineering as well as a Master's Degree in Management degree from the Kellogg School of Management at Northwestern University. He is on the Board of Trustees for the HealthCare Institute of New Jersey, and also is a director of DJO Global, Inc.

EVP and CFO Matthew Walsh has been in his position since December 2012. Previously, Mr. Walsh was SVP and CFO at Catalent since April 2008. His prior experience includes Escala Group and GenTek. Mr. Walsh received a B.S. in chemical engineering and an MBA from Cornell University. He is a CFA charter holder. 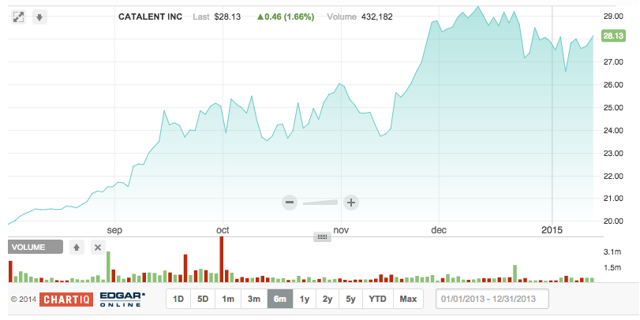 Given Catalent's early market success, with a volume of trades at ~400,000 shares/day on average, the firm's major pre-IPO insiders could be ready to get in on the action. (As noted in the introduction, the shares have been restricted from public sale.)

Insiders, including majority holder Blackstone, Genstar Capital, and seven-plus additional executives, directors, and officers, are likely take at least some profits. If this occurs, the extra supply of shares available for trading could effect a significant price decrease. The number of shares initially offered was just ~42 million, while insiders currently hold nearly double that figure at ~74 million.

Our published research has shown negative returns as large as (-5.8%) for IPO lockup expiration plays in the period of days (-11, 9) days surrounding the event day (0). Our updated sample includes 345 companies whose IPO lockup expirations fell in 2013-December 2014. Prior studies from Harvard and Duke Universities, the Univeristy of Kentucky, and NYU support these findings.

We suggest experienced investors consider this a short opportunity.

Don Dion
12.69K Followers
Don Dion is the CEO of Inland Management, a company focused on acquiring, subdividing, developing and marketing large tracts of land on the fringes of major metropolitan markets. Inland Management has sold land in all 48 contiguous states totaling billions of dollars. As CEO, Don is responsible for helping to maintain and enhance the firm’s strong financial position and identifying opportunities for growth. In addition to his role at Inland Management, Don Dion is the Chief Investment Officer of DRD Investments, LLC. Based in Naples, FL. and Williamstown, MA., DRD Investments is a family office focused on managing a long/short hedge fund, real estate, venture capital and various other financial assets for the Dion family. Don also serves as the trustee of the Dion Family Foundation, which focuses on helping individuals with tuition assistance at Catholic Institutions for grammar school, high school, and college education. The foundation also helps individuals by supporting Massachusetts General Hospital. Don is on two leadership boards and advisory committees at Massachusetts General Hospital and the Home Base Program (a partnership between Mass General and the Red Sox Foundation). He consults with Saint Dominic's Academy and serves as a trustee of Saint Michael’s College. Previously, Don was the founder and CEO of Dion Money Management, a fee-based investment advisory firm for affluent individuals, families and non-profit organizations. Founded in 1996 and based in Williamstown, MA. and Naples, FL., Dion Money Management managed approximately one billion in assets for clients in 49 states and 11 countries. While at Dion Money Management, Don was responsible for setting investment policy, creating custom portfolios, and overseeing the performance of client accounts. Don sold the firm to NYC-based Focus Financial Partners (FOCS) on September 1, 2007 and no longer manages money for other families or institutions. Don remains a shareholder of Focus Financial Partners (FOCS). Don is also the retired publisher of the Fidelity Independent Adviser family of newsletters, which provided a broad range of investor commentary on the financial markets, with a specific emphasis on mutual funds and exchange-traded funds. With nearly 100 thousand subscribers in the United States and 29 other countries, Fidelity Independent Adviser published two monthly newsletters and one weekly newsletter. The flagship publication, Fidelity Independent Adviser, was published monthly for 16 years and reached over 60,000 subscribers. In 2011 Don and his daughter Carolyn co-authored the Ultimate Guide to ETFs, available on Amazon.com. Prior to founding Dion Money Management, Don co-founded Litchfield Financial Corp. (LTCH) with Summit Partners. Don served as Chairman and CEO of Litchfield, which was listed on the Nasdaq in 1992 and acquired by Textron Corp. (TXT) in 1999. Don was also the Executive Vice President, CFO and General Counsel for Patten Corporation (BGX) from 1986 to 1988, where he played a critical role in the company’s successful initial public offering on the New York Stock Exchange. From 1983 to 1985, Don was a corporate lawyer with the Boston Law Firm of Warner and Stackpole. Before joining Warner and Stackpole, Don worked as a C.P.A. for Ernst and Young from 1979 to 1983. Don graduated with honors from Saint Michael’s College in 1976 with a B.S. degree in Economics and Business Administration. He received his J.D. from the University of Maine Law School in 1979 and his LL.M. from Boston University Law School in 1982. Don can be reached at donalddion@gmail.com