Earnings season can be a time of angst or delight for passive investors.

Price movements following earnings and guidance do not often appear to be in line with the actual news or its magnitude.

Earnings misses and beats are frequent and often result in substantial price moves that seem to catch "professionals" by surprise. 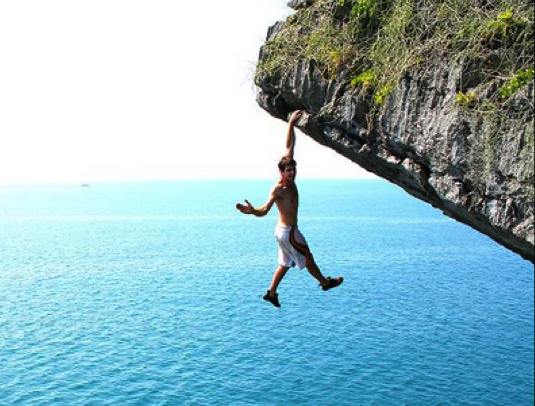 There's nothing like earnings season to really get the adrenaline flowing.

Basically, whether you employ a covered option strategy or not, earnings season is always going to be one that leaves investors alternating rapidly between elation and despair and just as frequently not understanding why the market reacted as it did when news seemed so benign.

Really, can a penny miss on earnings be that significant to cause a massive sell-off, especially when we know that analysts are working from a position of less than complete and perfect information? What kind of guide to action can a half-blindfolded and shackled outside analyst really provide?

You would think that under those conditions missing by just a penny or two would be pretty close, unless you then consider that there may be billions of outstanding shares, demonstrating the adage that pennies do add up.

But then there's also the issue of estimates not being remotely close to reality and the earnings miss or beat seems to take even the whisperers by surprise. Unfortunately, there's no weighting system to the earnings estimates provided by the myriad of analysts following a single stock when the average estimate is calculated. The ones with questionable track records are on equal footing with the ones providing more accurate estimates.

I especially like a comment that Jamie Dimon, Chairman and CEO of JPMorgan Chase (NYSE:JPM) made the other day, although attributed to someone else, with regard to analysts:

"We don't miss our estimates, you miss our actuals."

The reactions that can send share prices plunging or surging so frequently also raise an obvious question regarding just how well versed the professional investing community actually is, versus what they pretend to be, regarding their knowledge of the value of any stock and its future prospects.

There certainly seem to be an awful lot of surprises, in both directions, if professionals are really on the case. If they can be so deficient and fooled so frequently, leading to knee jerk responses, what hope is there for the lowly individual investor?

If you're a buy and hold trader, there's nothing more maddening than seeing your paper gains get eroded by earnings reports. Even if they eventually recover, you wonder about all of the wasted price energy that goes into the roller coaster ride, especially if it occurs on a regular quarterly basis. The long term ride higher, which the hope for any buy and hold investor, is often one that follows a very inefficient course.

That results in lots of effort and frequently without much to show for it.

While considering the sale of calls on existing positions in advance of earnings, in order to take advantage of the enhanced premiums that come along with the uncertainty that the earnings process brings, I particularly like to consider the sale of puts on positions that I may not already own, as long as there is an acceptable balance between the risk of a surprisingly large move and the reward for taking that risk.

The risk is defined by the option market and is based upon the premiums that are willing to be paid for options. The next part of the equation is defining the reward that makes the risk worthwhile for what is envisioned to be a short-term position.

I'm more than happy to be able to generate a 1% ROI for the week on such a trade, but individual temperament can determine what reward suits the risk. The greater the potential reward, however, the more likely that the strike level necessary to achieve that return will be within the price boundaries dictated by the option market, which may then result in the need for further action.

Among the stocks for consideration this week are many that generally carry inherent risk and even more so in advance of earnings. Often, and perhaps counterintuitively, those provide the best balance of risk and reward as the option market occasionally implies a large price move but still provides attractive option premiums outside of the range implied. 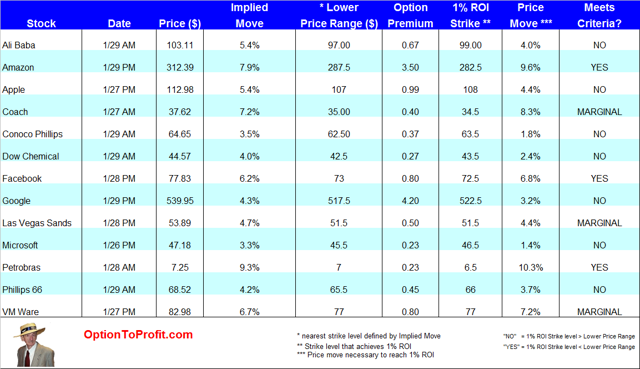 While there may be many fundamental or technical reasons to consider or avoid any of these stocks, when I look at the possibility of such earnings related trades, I tend to dismiss those reasons, focusing entirely on the defined criteria of the implied move, price range and the desired ROI.

The table can serve as a guide for other companies reporting earnings this week and can be customized to reflect an individual's pursuit of return.

Additionally, the same considerations can be made after earnings are released. That's especially the case when a potential candidate has met my criteria, but is moving higher in advance of earnings as was the case for the broader market to close the previous week and in the immediate aftermath of Mario Draghi's Quantitative Easing announcement on Thursday, until more sane heads prevailed the next day.

My preference is to not sell puts as a stock's price is climbing higher. In general, I like selling calls into price strength and puts into weakness, in the attempt to capitalize on momentum and emotion in the belief that the momentum will not continue at its current pace or direction.

In the event of price strength in advance of earnings, I tend to avoid the sale of puts, but would still consider doing so after earnings are released if there is a resultant price drop. Premiums can still remain high after the news has been digested and while emotions may still be running high.

The stocks that are most likely to receive a "YES" rating, indicating that they meet the established criteria, tend to already trade with some volatility even when earnings are not part of the equation.

Somewhat surprisingly a number of the stocks that I had expected would receive a "YES" designation based upon past quarters, did not do see this time, as the option market is predicting less earnings related movement and is not offering adequate premiums outside of the predicted price range.

Based upon some recent price moves observed in companies that have presented disappointing earnings, I wouldn't even consider any of those stocks rated as being "MARGINAL," as the reward is simply insufficient, even when reward expectations are low.

For those that received a "YES" rating based on Friday's closing prices, I would re-evaluate as next week's trading begins in order to avoid a situation that may have greater risk of assignment than is offset by the premium's reward.

I usually am not interested in taking assignment of such shares in the event of an adverse price move, although even with stronger indications, as with "YES" ratings, any time that you sell puts, you have to be prepared to take ownership, unless you have some other exit plans, such as rolling over to a new expiration date, ideally to a lower strike level. The ability to do so is greatly enhanced by dealing with stocks that have adequate trading volume of their underlying options, especially for those deep in the money.

If you are an adrenaline junkie, earnings related trades may be just the fix for you, especially if you take measures to limit risk by limiting greed. Taking those steps can give the thrill while still keeping you in the game for the next round of earnings that will surely come along before you know it.

Disclosure: The author is long COH, DOW, LVS, PBR. The author wrote this article themselves, and it expresses their own opinions. The author is not receiving compensation for it (other than from Seeking Alpha). The author has no business relationship with any company whose stock is mentioned in this article.

Follow George Acs and get email alerts
+
Add a comment
Disagree with this article? Submit your own.
To report a factual error in this article, click here.
Your feedback matters to us!