Following last week’s tumultuous volatility, investors are faced with a revised set of opportunities and decisions. Consensus has shifted towards lower GDP growth and interminably low interest rates. The top down perspective is even more troubling than usual, with weakening consumer spending in the U.S. at the same time as European GDP growth appears to have slowed to a halt.

Conversely, many companies continue to have good prospects and their prices fell more than is warranted by the changed macro outlook. That is always the case though. Sometimes the fundamentals deteriorate further to catch up with lower stock prices and sometimes they don’t. Here’s our perspective.

The fall in bond yields combined with the fall in equity prices has driven the equity risk premium out to levels not seen in almost half a century. 10 year Treasury yields of 2.25%, combined with an earnings yield on the S&P 500 of around 7.9% ($95 earnings divided by current level of 1,205), puts the difference at 5.6%, closing in on 1974’s level of 6.1%, which is the widest in almost 50 years (click to enlarge image): 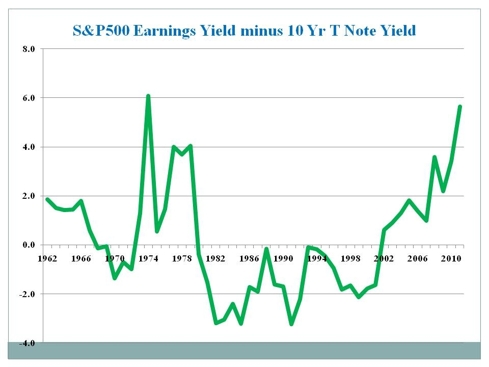 Of course it’s there for a reason, and implicit is that corporate profit growth will slow sharply over the next several years. This would be unprecedented in modern times, but maybe those are the times we’re in. For our part, though, we think the wide spread is an opportunity.

To focus on fixed income, no doubt bonds have been a great investment this year. High grade bonds as measured by Dow Jones have returned over 6% year-to-date including coupon payments. But with short term rates now anchored at 0% for at least the next two years and ten year Treasury yields approaching 2%, you really might as well sit in cash. The compensation for moving out along the yield curve is minimal, and there seems little to prevent the US dollar from weakening against faster growing emerging market currencies other than another flight to quality.

The WisdomTree Dreyfus Emerging Currency ETF (CEW) is a good way to invest in a diversified basket of short maturity emerging market currencies. We currently have modest FX exposure in our fixed income strategy but will be investing in this and similar instruments on US dollar strength, since now more than ever it seems that fixed income investors need to leave the U.S. in order to earn a fair return.

Our fixed income strategy remains invested in the two year sector through the iShares Barclays 1-3 Year Credit Bond (CSJ) and has capacity to opportunistically add non-US dollar exposure For that matter, the relative pricing of fixed income and equities means that, at a minimum, balanced accounts should be rebalancing so as to raise their equity allocations back up to normal levels and similarly reduce fixed income. If equity markets remain weak, which seems quite possible given the moderating growth outlook, we intend to make an additional modest shift from fixed income into equities for appropriate clients.

Our deep value equity strategy is fully invested. We own some large cap, diversified companies such as Kraft (KFT), which recently announced plans to break itself up into two companies (one focused on fast growing snack markets and the other on grocery lines) which should allow improved management focus and greater value realization.

We continue to like natural gas E&P names, and Range Resources (RRC) is our biggest investment in this sector. The company continues to perform well, and we believe it will ultimately be acquired by one of the majors. Its potential natural gas reserves of 50 TCFE (trillion cubic feet equivalent), if valued at $1 per MCF in free cashflow, would mean a substantially more valuable company than its current $10Bn in market cap. Concerns over fracking remain, but the Economist recently ran an interesting article on natural gas. I also note with interest that Exxon Mobil (XOM) took out a full page ad extolling the virtues of domestic natural gas and explaining why the environmental risks were minimal.

We continue to like Aegean Marine Petroleum (OTC:ANW), perhaps the only company worth considering in shipping. Fleet owners continue to increase capacity faster than demand, destroying value as cargo rates remain far below breakeven. ANW provides bunker fuel to the growing global shipping fleet, and more ships should equal more demand (although cash strapped operators are managing fuel consumption carefully through techniques such as “slow steaming” to mitigate their poor economics).

ANW recently reported a second consecutive quarter of expanding margins on bunker fuel. Strongly growing volumes make $0.80 per share earnings next year a reasonable estimate, which makes this $5 stock attractively priced. In fact, it might be the only shipping stock anywhere that’s currently profitable.

Finally, a note on the euro. We appear to be heading inexorably towards a conflict between German refusal to bail out their profligate southern neighbors and the inevitable pressure on finances that fiscal austerity is imposing during a time of slowing growth. We think it is increasingly likely that the ponderous decision-making of the EU combined with these irreconcilable goals will lead to a currency crisis.

It’s not clear how a country can exit the common currency, but we think there will be serious consideration of how to make this possible. A smaller eurozone would be less attractive as a reserve currency, and getting there would undoubtedly involve substantial economic turmoil. In our hedge fund we are carrying a short euro position.