I recently spoke to another Seeking Alpha contributor who expressed concern that home prices could drop significantly from their current levels. This article explains why that is very unlikely to happen.

I am a real estate receiver for a shopping center in northwest Phoenix. When visiting the property recently, I drove around the neighborhood surrounding shopping center, which featured 1970s-built ranch houses that would be familiar to many people who grew up in the western U.S. I was struck by two things: (1) many of the recent sales in the neighborhood were well under $100,000. Some were as low as $50,000; and (2) the other shopping centers nearby were not filled only with 99 Cent Only stores and check cashing shops. In fact, the closest grocery stores were upscale, with hardwood floors and expensive lighting in the produce area, as well as other upgrades.

Replacement Cost and Why It Matters

The cost to build a new home similar to the ones I saw in Phoenix is at least $130,000. This includes land development costs such as streets, curbs, gutters and utilities, as well as city and county impact fees, plus hard constructions costs. I am assuming that the land is free -- with land costs of just $20,000 per lot the total cost is likely in excess of $150,000.

Now let's look at the historical population growth rate of Phoenix. Below is a chart, courtesy of Arizona State University's Water Simulation project. 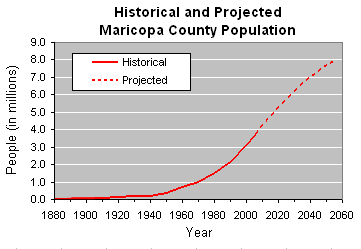 If Phoenix is going to continue grow, even at half the projected growth rate, then home builders will eventually need to start building homes there again. However, the only place with vacant land to build homes is on the outskirts of the city, far from jobs, which tend to be closer to the core.

Granted, some people may prefer to live in a new home for $160,000 in the distant suburbs (this is about the lowest price at which homes can be built and sold profitably). However, others will prefer a 1970s house for $125,000 -- in a neighborhood with upscale grocery stores and a much shorter commute to work.

The bottom line is, home values in places like Phoenix are much more likely to go up in the coming years than to go down. In all likelihood, we are looking at a bottom right now. Values reflect the supply-demand imbalance brought about by the foreclosure crisis. But replacement value is a more fundamental driver of stabilized value. And replacement value dictates homes such as these are undervalued currently.

Past value is certainly no indication of future value in real estate. Still the table below showing the history of sales of a home in northwest Phoenix, which I chose more or less at random from website trulia.com, is remarkable. This home fell by 77% in six years. It recently sold for half of what it was worth 17 years ago, in 1994.

Note: this article does not purport to say anything about the near-term direction of the stock prices of home builders such as KBR or Beazer Homes. It only argues that at some point, their services will be needed once again and before that can happen, values of existing homes need to move up significantly.

Jan Brzeski
165 Followers
I manage several funds dedicated to investing in single family homes. The bulk of our business consists of making loans to developers who specialize in buying, renovating and reselling single family homes in California, in order to generate steady income with a healthy margin of safety. We have a special emphasis on making loans on luxury properties that will sell for $2-$6 million upon completion of an extensive renovation. To date I have made more than 275 real estate investments where my own capital was at risk. I am actively involved in real estate education and have taught four classes at UCLA Extension as well as organizing eight events at the UCLA Anderson School of Management and speaking on real estate as part of the CFA Los Angeles Alternative Investment Series. For more information, please see my LinkedIn profile at www.linkedin.com/in/janbrzeski3104289109