The Baltic Dry Index, usually referred to as the BDI, is making historical lows in recent weeks, almost every week.

The supply of ships is not very flexible, so changes to the index are more likely to be caused by changes in demand.

Let's first look at the three cases where the Baltic Dry Index predicted a stock market crash, as well as a recession.

In late 1986, the newly formed BDI (which replaced an older index) hit its first all-time low.

Other than predicting the late 80s-early 90s recession itself, the index was a precursor to the 1987 stock market crash. 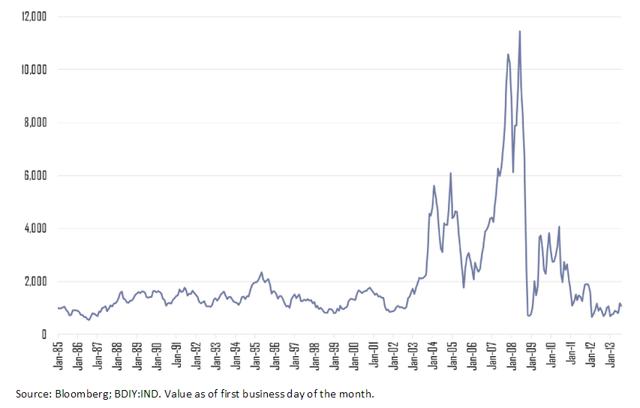 In 1999, the BDI hit a 12-year low. After a short recovery, it almost hit that low point again two years later. The index was predicting the recession of the early 2000s and the dot-com market crash.

2008 - The Sharpest Decline in The History of the BDI

You already know what happened next. The 2008 stock market crash and a long recession that many parts of the global economy is still trying to get out of.

Is It Real Causation?

One of the pitfalls that affects many investors is to confuse correlation and causation. Just because two metrics seem to behave in a certain relationship, doesn't tell us if A caused B or vice versa.

When trying to navigate your portfolio ahead, correctly making the distinction between causation and correlation is crucial.

Without doing so, you can find yourself selling when there is no reason to, or buying when you should be selling.

So let's think critically about the BDI.

Is it the BDI itself that predicts stock market crashes? Is it a magical omen of things to come?

My view is that no. The BDI is not sufficient to determine if a stock market crash is coming or not. That said, the index does tells us many important things about the global economy.

Each and every time the BDI hit its lows, it predicted a real-world recession. That is no surprise as the index follows a fundamental precursor, which is shipping rates. It's very intuitive; as manufacturers see demand for end products start to slow down, they start to wind-down production and inventory, which immediately affects their orders for raw materials.

Manufacturers are the ultimate indicator to follow, because they are the ones that see end demand most closely and have the best sense of where it's going.

But does an economic slowdown necessarily bring about a full-blown market crash?

Only if the stock market valuation is not reflecting that coming economic downturn. When these two conditions align, chances are a sharp market correction is around the corner.

In recent weeks, the BDI has hit an all-time low that is even lower than the 1986 low point. That comes after a few years of depressed prices.

What does that tell us?

Looking at stock prices, we are at the peak of a 6-year long bull market, although earnings seem to be at all-time highs as well.

What the BDI might tell us is that the disconnect between the global economy's struggle and great American business performance across the board might be coming to an end.

More than that, China could be a significant reason for why the index has taken such a dive, as serious slowdowns on the real-estate market in China and tremendous real estate inventory accumulation are disrupting the imports of steel, cement and other raw materials.

The BDI tells us that a global economic slowdown is well underway. The source of that downturn seems to be outside of the U.S., and is more concentrated in China and the E.U.

The performance of the U.S. economy can't be disconnected from the global economy for too long.

The BDI is a precursor for recessions, not stock market crashes. It's not a sufficient condition to base a decision upon, but it's one you can't afford to ignore.

Going forward, this is a time to make sure you know the companies you invest in inside and out, and make sure end demand for their products is bound for continued growth and success despite overall headwinds.

Jonathan Fishman
1.76K Followers
I am a highly trained professional equity analyst. My specialty is finding companies with excellent ratios of risk to reward. Before going independent, I was the head analyst at a boutique Israeli hedge fund. Today I am a consultant to several multibillion-dollar firms. I have covered many sectors, including technology, solar and semiconductors. I have learned to connect the dots and discern how forces in these various industries will affect individual companies. I am a big believer in analyzing investments from the top down. This means identifying themes and trends that can reveal where industries and individual companies will be in the future. There are no magic formulas for this process, just a lot of hard work. After I've found a company, analyzed it and concluded its value, then it is just like a poker game with endless cards. All we have to do is sit and wait for the next card to reveal itself and adjust our thesis accordingly. Once we find the true value of a company, we must ignore day-to-day market chaos. If we have done our research properly, we do not need to worry if the Dow goes up or down a particular day, week or month. Peter Lynch, Ben Graham and Phillip Fisher are my biggest influences. I encourage anyone who wishes to learn more about the market to read any of their books.