On Friday, I looked at Lowe’s Companies (NYSE: LOW) and concluded that there exists a significant value opportunity. I rarely look at just one company in an industry, as I find it useful (and prudent) to compare performance, hunting for signs of strength or weakness that stand out from the crowd. Given this, I thought it would be prudent to look across the home improvement industry at LOW’s biggest competitor, The Home Depot, Inc (NYSE: HD).

Unlike my usual articles, I will lead with the conclusion: Home Depot is a great company, but not a great investment.

HD does not currently offer a margin of safety, and so a purchase at today’s prices entails a greater degree of speculation than a similar investment in LOW. In other words, the market has priced in expectations that HD will continue to outperform LOW, and in fact even outperform HD’s own strong historical record for the foreseeable future. Any stumble would surely reset those expectations, as we’ve seen so many times in the past.

Value investors know that the better bet is to look for companies for which the market has low expectations, whereby continued underperformance surprises no one, and any positive action produces an inordinate increase in the share price. From my valuations, LOW fits that bill. That was the content of last week’s post, so let’s get on with HD. First, let’s look at the company’s returns over the last 18 years. 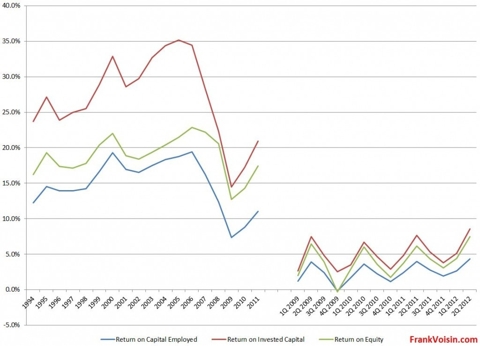 Similar to what we saw with LOW, HD had strong returns until the recession hit. One of the more relevant things to look at here is how quickly HD appears to be rebounding from its 2009 lows. As noted in the LOW post, recovery for that company has been somewhat weak. Overall, HD’s returns have been superior to those of LOW throughout the period presented. Let’s turn to revenues and margins. 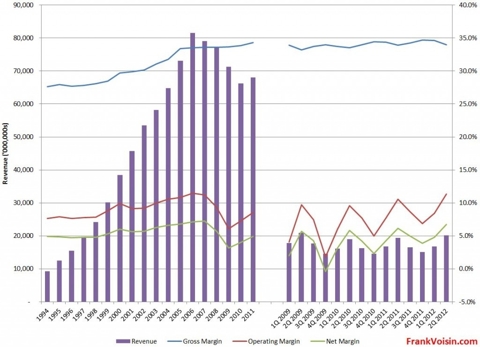 Here we see additional similarities between the two companies. Both experienced rapid revenue increases until about 2006/2007. For HD, the recession hit much harder, reducing revenues by 14.4% from 2008 to 2010, as compared to just 2.2% for LOW over the same period. The difference is largely the result of store expansion. Over that period, LOW increased its store count by 11.5%, whereby HD changed its store count by just 0.45%. Thus, the more relevant measure is not aggregate revenues but rather revenues per store. 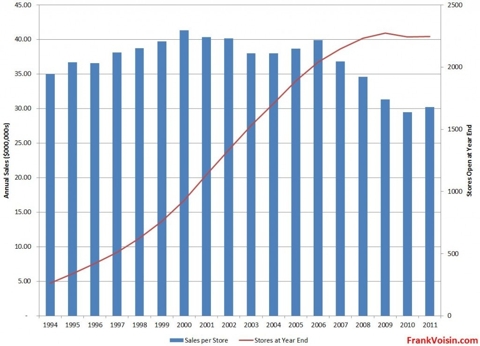 From this chart, we see that HD has held sales per store steady until the recession, which stands in stark contrast to LOW which doubled sales per store from 1996 to 2007. Over the same period, HD increased sales per store by just 0.64%. A key point here is that HD started from a much higher level, and still operates at higher volume per store. Later, I will discuss the implications for the company’s valuation by making projections as to when sales per store will return to normal levels. First, let’s turn to free cash flows. 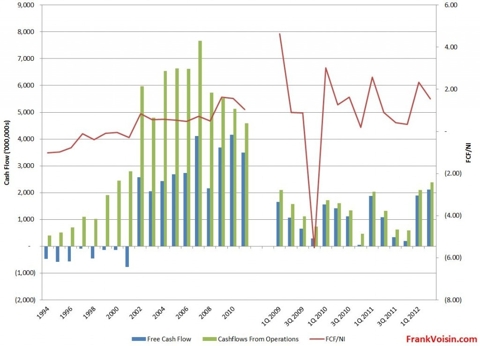 Here we see that, in comparison to Lowe's, Home Depot has generated significantly higher free cash flows over its recent history. The reason for this appears to be the same reason that we have seen LOW’s free cash flows explode over the last two years – expansion. As noted above, HD has increased its store count at a slower rate, which has translated to lower capital expenditures and higher free cash flows. To show this, it is as easy as comparing operating cash flows (the green bars) for both companies. LOW’s CFO has increased largely in proportion with its revenue increases, but free cash flow was quite week until recently, as the company had been aggressively expanding its store count. HD on the other hand, was a bit slower in its expansion (largely because of its already high store count earlier in the decade), allowing it more free cash flow throughout the period.

What has HD done with its free cash flows? A combination of repurchasing shares and cash dividends, both actions deserving shareholder applause. Over the last decade, HD has returned $27.1 billion in cash via share repurchases (net of share issuance), and another $11.15 billion via dividends. Pretty impressive. Unfortunately, this has been in excess of the company’s total free cash flows, which means the company has taken on debt over the period. Let’s look at the company’s capital structure. 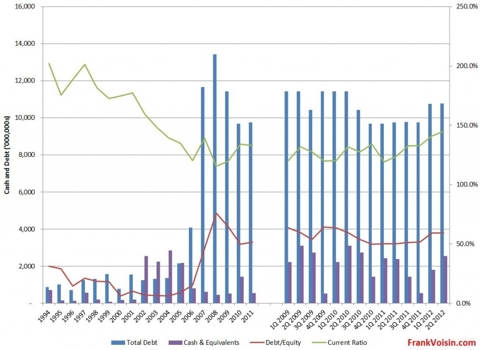 As you can see, the company’s total debt increased quite dramatically as the recession began. I am not a huge fan of this level of debt, though like Lowe's, Home Depot can certainly afford it. The company’s EBIT/Interest ratio was at least 7x at the depths of the recession, and has averaged nearly 12x over the last five years. Additionally, the company has significant free cash flows (as noted above) that would allow it to pay down the debt in just a few years if management shifted away from share repurchases toward debt repayment. But with debt this cheap, there is little incentive to do so.

As in the LOW post, there are two other items to look at. First, let’s look for any trends in the difference between the company’s reported comparable store sales and a calculated ratio of revenues to total ending store count. 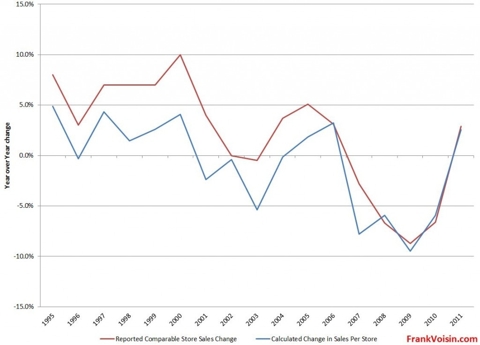 As with LOW, I don’t see anything to worry about here. Let’s look at the company’s cash conversion cycle before we get to valuation. 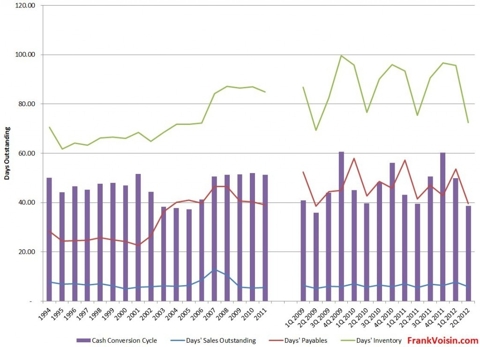 Home Depot, like Lowe's, has done an exceptional job of maintaining a steady cash conversion cycle. Both companies have put pressure on suppliers, as shown by growing Days’ Payable, which has allowed Days’ Inventory to increase with only a negligible net effect on the full cycle. I am not worried about this.

Now for valuation. As noted in my introduction, I did not find a margin of safety at HD. Under various scenarios for a recovery in same store sales, I found that even in the bullish scenarios HD is slightly overvalued. On a number of metrics, LOW presents a far clearer opportunity. The reason? Market perception. The market correctly views HD as a superior performer. HD has earned superior returns over the period analyzed, with higher sales per store and better expense management (HD has consistently higher operating and net margins). HD has achieved stronger free cash flows and has used these to reward shareholders.

Unfortunately, a great company does not necessarily make for a great investment. The market’s rosy view of HD has led to a higher valuation that has eliminated any margin of safety for those unexpected events that cause even great companies to stumble. On almost all metrics, HD is a more highly valued company. The market is overly optimistic about HD, and overly pessimistic about LOW.

Remember, in investing you aren’t paid for identifying strong or weak performers but rather for identifying where the market has mis-priced the the degree of strength/weakness.