A little over a year ago, I was called just about every name in the book for stating, in the face of supposed never ending printing, that the long bond is something everyone should own. You can read the original piece here.

For a number of years now, we continue to hear about how the U.S. government is supposedly "bankrupt" and the only investment one should own is hard assets to protect ourselves from the impending collapse of America. The logic goes something like this: as America prints money, the rest of the world will somehow demand payment in full and stop funding the U.S. debt, thus causing a bond market collapse. This bond market collapse will cause interest rates to skyrocket, thus crippling the country with interest payments that are not affordable based on tax receipts.

All of these arguments sound logical on the surface, but they unfortunately do not apply to the current monetary system in which we exist as a nation today. Primarily, the rest of the world does NOT in fact "fund our debt." Tax receipts also "fund nothing." Rather than beat that drum in this article, I would highly encourage the reader to read these articles:

I would imagine that the recent action in the markets has the hyperventilators ... I mean, hyper-inflationistas scratching their head as to why things haven't fallen apart as they have predicted.

How in the world are interest rates making all time lows? Why is gold not sitting at $10,000/oz already? We are told tirelessly to, "just wait." Impending doom is right around the corner. Hold on to your food, guns, and gold, and you will be able to make it out of the apocalypse unscathed. Just wait!

With all of the warnings though, the fear mongers have been wrong. As you can see in the chart below, the long bond has appreciated nearly 40% against a basket of commodities since the end of QE2 in June.

Huh?!?!?! How is that possible. I mean, even the great bond master of our time, Bill Gross was CERTAIN that the bond market was going to collapse. He stated that the end of QE2 would be a "d-day" for the bond market. He even went so far as to short the long bond, as many lovers of gold (GLD) and readers of this site are apt to do. What has happened each time QE has ended though? Rates have plummeted (Credit to PragCap.com): 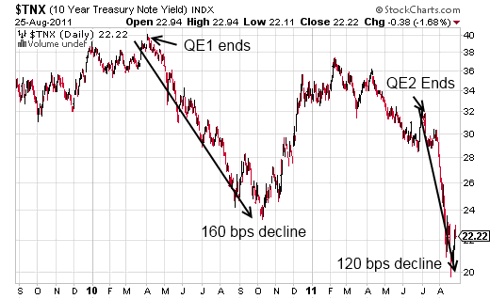 Wait a minute! Wasn't America supposed to fall apart? Weren't Treasuries supposed to collapse and gold skyrocket? Well - that hasn't been the case. As you can see below, gold, price in long term treasuries, has actually COLLAPSED nearly 15%:

Bonds are a terrible investment? Let's look at how the long bond has done long term, in real money. Gold, through its massive run, in real terms has only finally caught the long bond in value. (After this recent collapse in gold price and massive rally in bond prices, gold is lagging again) Charts courtesy of InvestorFriend.com: 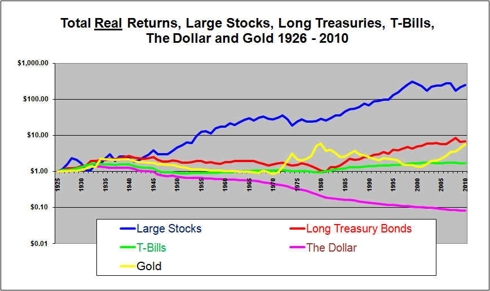 I wrote on August 16th, 2010, in the comment section of my original article:

"My long term target unfortunately is 1% on the ten year and 2-2.5% on the 30 year. It will be a bumpy ride, but that's the target. Of course - if the details change, so might the target prices."

I was called nuts then. Yet today, we continue down the path of lower interest rates in the face of conditions that are supposed to be hyper-inflationary. With the long bond now sitting at 2.95%, as of this writing, we are getting closer to that prediction.

As always, it makes most sense for investors to not be dogmatic in their beliefs. Too many people today are calling for the end of America, and selling the idea of buying gold and other commodities, shorting Treasuries, and shorting the stock market. That is a very risky, one way bet, that they will be right with their hyperinflation bet. These past few months show that it makes most sense to remain diversified with investments that will do well in any environment. To throw Treasuries out the window because you just "know" that rates have to go higher any moment, is a complete fallacy, that continues to be proven year after year through the workings of the bond market. The U.S. economy is a long way away from being healthy enough to support higher interest rates across the board. Be careful of anyone who promoted Gold and hard assets only. Lest you be completely certain that I am an idiot and that this time it is different and ok to own hard assets only, maybe 140 years of data will help convince you to think differently: 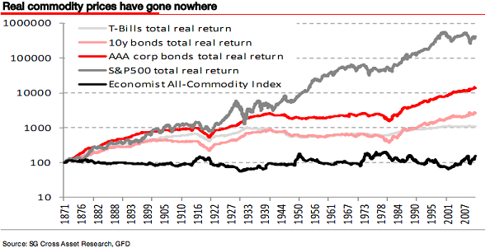 Be careful out there, especially from where you get your investment ideas.

Disclosure: I have no positions in any stocks mentioned, and no plans to initiate any positions within the next 72 hours. We do not directly own any of the symbols in the article, but do own Stocks, Gold, and Treasuries through other vehicles. We are long most everything in this article.

Tim Ayles
1.46K Followers
I am the Chief Investment Officer of Napa Wealth Management and a Certified Exit Planning Advisor (CEPA)Financial Advisor for Lower-Middle Market Business Owners We take good businesses and make them Best-In-Class. I am not just a numbers guy with theories. I am also a business owner who started a trucking company in Nov 2013 and built it to $10,000,000 in revenue in under 5 years. I know nothing about driving a truck, yet I built a successful truck business. I plan to exit.Because I have my own small businesses, I am obsessed with business valuation and the economy as a whole. I am a massive believer in MMT (and feel like I know where the weaknesses and incorrect beliefs occur. I write with a bit of an edge in order to challenge popular thinking on most topics.)