The world at large, as well as the worlds of business and technology, lost a great, iconic leader yesterday. In addition to his obvious and widely renowned accomplishments, I believe that Steve Jobs was also a great teacher. Steve Jobs didn't teach by lecture, instead he taught by his actions. Yesterday marked the second time that Steve Jobs left his beloved Apple Inc. (NASDAQ:AAPL). However, his latest departure will, I believe, have an entirely different impact on his company than did his first.

The first time Steve Jobs left Apple, in 1985, he was fired. In short, his partners in upper management and the board of directors at that time did not share Jobs' vision for Apple. His friend Larry Ellison, CEO of Oracle Corp. (ORCL), recently quipped upon the firing of another high-profile CEO that it was "the second-dumbest decision by a board of directors next to Apple's firing of Steve Jobs.” What follows will be a review of the consequences of Steve Jobs’ firing, followed by what he accomplished upon his return.

Apple’s Earnings After Jobs Was Fired

The following graphical review looks at Apple Computer's operating track record from 1992 to 1997, the year upon which Steve Jobs was hired back. Unfortunately, the F.A.S.T. Graphs™ earnings and price-correlated research tool only goes back 20 years, and therefore cannot go all the way back to 1985, the year Jobs was fired. However, the six-year period 1992 to 1997 clearly depicts the ultimate consequences of Apple’s fateful decision. Earnings per share were on a steady downward trajectory from $1.08 per share in 1992 to losses in 1996 and 1997. 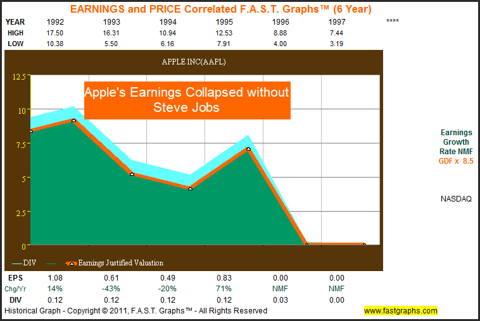 This second graph shows how Apple's stock price followed its earnings down during this dark period in Apple's history. The price of Apple stock fell from a high of $17.50 in 1992 to a low of $3.19 by the end of 1997. 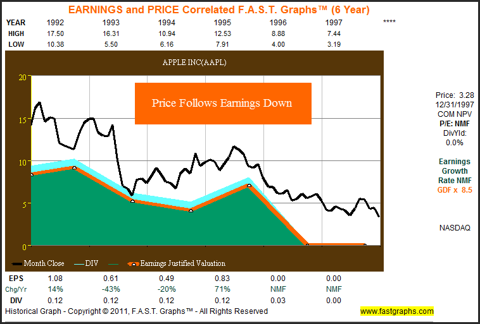 The following performance results for the period 12/31/1991 to12/31/1997 shows that Apple shareholders suffered a compounded annual loss of 21.5% per annum during these last six years of Jobs' absence. To put that into perspective, a $100,000 investment fell to $23,280 for a cumulative 77% loss of shareholder capital.

After Steve Jobs was fired from Apple, he founded NeXT Computer and bought the company The Graphics Group, which he eventually renamed Pixar. In 1996, Apple Computer purchased NeXT Computer, which led to Steve Jobs retaking the reins, first as interim CEO, then permanent CEO by calendar year 2000, until his recent resignation earlier this year. Although it took Jobs a few years to recalibrate his beloved Apple Computer, the long-term results that followed were extraordinary. It is said that Jobs once quipped that he was iCEO, obviously referring to the great success of his "iProduct" launches. The graphical presentation below says it all.

Since calendar year 1997, Apple Computer, under Steve Jobs’ guidance, generated earnings growth of 34.4% per annum. The first few years were a struggle as Jobs reengineered Apple's products and culture and recalibrated it back to his own vision. Utilizing his NeXT technology as its new foundation, and under his direct order for the development of his iVision, Apple Computer’s lineup of offerings was transformed in just one short year. The rest, as they say, is history. From calendar year 2001 to current, Apple Inc.’s earnings per share have been on an uninterrupted upward trajectory. 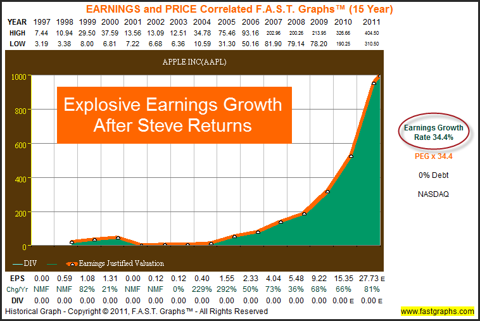 However, as can be seen from the graph below, depicting monthly closing stock prices since his return, it is crystal clear that shareholders were rewarded handsomely with Jobs' return. Apple Inc.'s stock price has risen from its low of $3.19 in 1997 to its closing price on October 5, 2011 of $378.25. 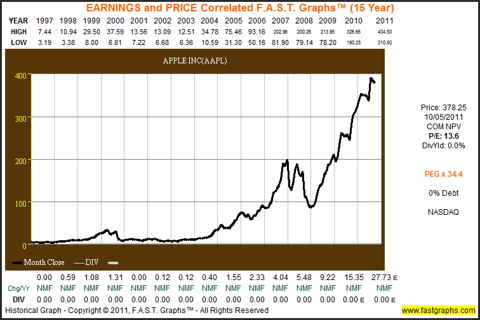 The astounding returns that Apple shareholders enjoyed under Jobs' guidance, although extraordinary, do not, in our opinion, reflect the full value of Apple’s shares. We believe that a strong case could be made that Apple’s stock should be trading at a P/E ratio north of 20 instead of the meager 13.6 P/E ratio it currently commands. In other words, we think that Mr. Market is significantly undervaluing Apple’s shares, possibly from a fearful anticipation of his tragic loss of a life too short. 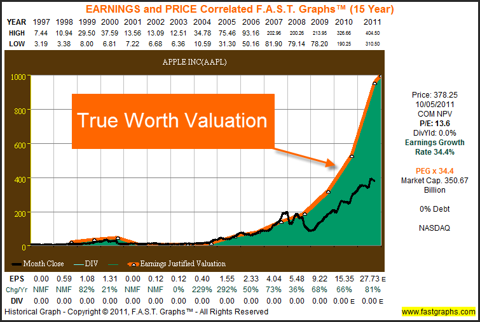 Based on what has been seen and written thus far, it would be easy to conclude that Apple may be in trouble now that Steve Jobs is gone. However, as we alluded to in the opening paragraph of this article, we believe that this second, and unfortunately permanent, departure of Steve Jobs will have an entirely different impact on Apple's future than did his first, temporary, sojourn.

Upon his first departure, the Apple Computer Co. rejected Steve Jobs’ vision and took the company in a very different and obviously disastrous direction. However, this time we believe the company continues to embrace the vision that this extraordinary visionary of a man has instilled within every fiber of the company's current culture. We believe Jobs' legacy lives on in the hearts and minds of all the Apple employees and culture. Therefore, we further believe that Steve's contribution will be a lasting one, and that Apple's future profitability and growth will continue into the distant future.

I personally believe that Steve Jobs is more than an iconic computer genius and legendary businessman. I believe that Steve Jobs is also a great teacher, and that his legacy transcends his computer company. In the technology section of today's Wall Street Journal, there is an article titled "Jobs: 'Find What You Love.'" I have printed copies for my children to read. They are two excerpts that I would like to share in this article.

The first excerpt discusses Steve Jobs’ basis for optimism -- trust. In the recent past, I have written optimistic articles that have been well received by many, but also scoffed at by a few.

Again, you can't connect the dots looking forward; you can only connect them looking backwards. So you have to trust that the dots will somehow connect in your future. You have to trust in something — your gut, destiny, life, karma, whatever. This approach has never let me down, and it has made all the difference in my life.

This second excerpt speaks to not only the secret to happiness in life, but also the secret to long-term success. I feel blessed to, like Jobs did, have found an occupation that I love. When you're lucky enough to do this, there is no job, instead you have the means to pursue your passion. This is where true happiness lies, and why I felt so strongly about sharing it with my children. There's also a lesson on perseverance in dealing with life's inevitable challenges.

I'm pretty sure none of this would have happened if I hadn't been fired from Apple. It was awful tasting medicine, but I guess the patient needed it. Sometimes life hits you in the head with a brick. Don't lose faith. I'm convinced that the only thing that kept me going was that I loved what I did. You've got to find what you love. And that is as true for your work as it is for your lovers. Your work is going to fill a large part of your life, and the only way to be truly satisfied is to do what you believe is great work. And the only way to do great work is to love what you do. If you haven't found it yet, keep looking. Don't settle. As with all matters of the heart, you'll know when you find it. And, like any great relationship, it just gets better and better as the years roll on. So keep looking until you find it. Don't settle.

In addition to the life lessons Steve Jobs has provided as discussed above, his legacy as a businessman also provides important lessons on investing. This little study on Apple Computer, both with and without Steve Jobs, clearly illustrates the importance and benefits of owning great American businesses. There's a lot of doom and gloom in the world today, and with it a lot of rejection regarding the ownership of common stocks. We believe that this portends to create tragic consequences. Apple Inc. is just one of many great American businesses that are very attractively valued today. The best time to invest is when prices are low; we believe that time is now. We intend to own Apple for a long time to come.

Disclosure: I am long AAPL at the time of writing.

Disclaimer: The opinions in this document are for informational and educational purposes only and should not be construed as a recommendation to buy or sell the stocks mentioned or to solicit transactions or clients. Past performance of the companies discussed may not continue, and the companies may not achieve the earnings growth predicted. The information in this document is believed to be accurate, but under no circumstances should a person act upon the information contained within. We do not recommend that anyone act upon any investment information without first consulting an investment advisor as to the suitability of such investments for his specific situation.

Chuck Carnevale
60.48K Followers
Author of The Dividend Kings
Maximize your income with the world’s highest-quality dividend investments
Charles (Chuck) C. Carnevale is the creator of FAST Graphs. He is also Co-Founder of The Dividend Kings, along with Brad Thomas and Adam Galas (Dividend Sensei), offering a premium service on Seeking Alpha's Market Place. Chuck is also Co-Founder of an investment management firm. He has been working in the securities industry since 1970: he has been a partner with a private NYSE member firm, the President of a NASD firm, Vice President and Regional Marketing Director for a major AMEX listed company, and an Associate Vice President and Investment Consulting Services Coordinator for a major NYSE member firm. Prior to forming his own investment firm, he was a partner in a 30-year-old established registered investment advisory in Tampa, Florida. Chuck holds a Bachelor of Science in Economics and Finance from the University of Tampa. Chuck is a sought-after public speaker who is very passionate about spreading the critical message of prudence in money management. Chuck is a Veteran of the Vietnam War and was awarded both the Bronze Star and the Vietnam Honor Medal.