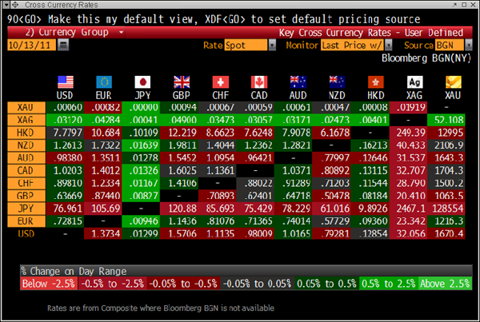 Gold is marginally lower in all currencies today and appears to be steadying near four-week highs on further evidence of strong consumer demand in Asia. Market concerns about contagion in the eurozone should prevent significant price falls from these levels.

One of the primary drivers of higher gold prices in recent years has been money supply growth in the US and globally and consequent concerns about currency debasement.

Since 1998, increases in the price of gold have been correlated with increases in global M2. If central banks in both the developed and developing world continue to adhere to highly accommodative monetary policies, global M2 should subsequently rise and support a further increase in gold prices, as it has in the past. 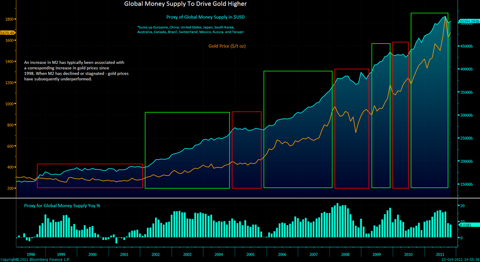 Developing China’s M2 money supply has been rising by a large 20% and Russia’s by a very large 30%.

Even developed countries such as Switzerland have seen money supply growth of 25%. Japan’s M2 is gradually moving higher after the ‘Lost Decade’ and after recent events exacerbating an already fragile situation.

Global money supply growth is increasing by 8%-9% per annum. Meanwhile annual gold production is less than 1.5% per annum.

We looked at money supply growth and charts regarding global money supply, debt levels etc in a comprehensive article in early August (‘Is Gold a Bubble? 14 Charts, the Facts and the Data Suggest Not’) when gold was trading at $1,670/oz or much the same price level as today. The charts and conclusions remain apposite.

In order to fight economic problems brought about due to too much debt, debt based paper and electronic currency has been created at historically high levels. There is no sign of this abating any time soon given the scale of the global financial and economic crisis.

Indeed, shuffling debt from one sector to another and creating more debt to deal with what was essentially a problem of too much debt is making the situation worse and leading to currency depreciation and debasement.

Growth in global money supply, U.S. dollar, euro, pound and all fiat currencies depreciation or currency debasement and massive uncertainty in global financial markets and the real risk of contagion will likely continue to lead investors and savers toward using precious metals, and specifically gold and silver bullion, as stores of value and safe havens.

GoldCore
664 Followers
GoldCore are respected international bullion dealers who are experts in the execution and logistics of the highly specialized precious metals market. GoldCore have been providing precious metal investment solutions for an International client base since 2003. The Executive Director of GoldCore, Mark, writes articles in Irish and international financial newspapers, journals and magazines. His daily market updates are quoted and reported in the international financial press on a daily basis. Dow Jones MarketWatch, International Business Times, Bloomberg, Dow Jones Newswires, CNN Money, Associated Press, the International Herald Tribune, the Daily Telegraph, the Wall Street Journal, the FT and many others have all featured his analysis. He was the MoneyMate and Investor Magazine Financial Analyst of 2006. He is one of 22 international analysts who predict gold’s future weekly movement in the Bloomberg Weekly Gold Survey and is featured in the annual Reuters Precious Metals Poll.
Follow
9 Comments
To ensure this doesn’t happen in the future, please enable Javascript and cookies in your browser.
Is this happening to you frequently? Please report it on our feedback forum.
If you have an ad-blocker enabled you may be blocked from proceeding. Please disable your ad-blocker and refresh.