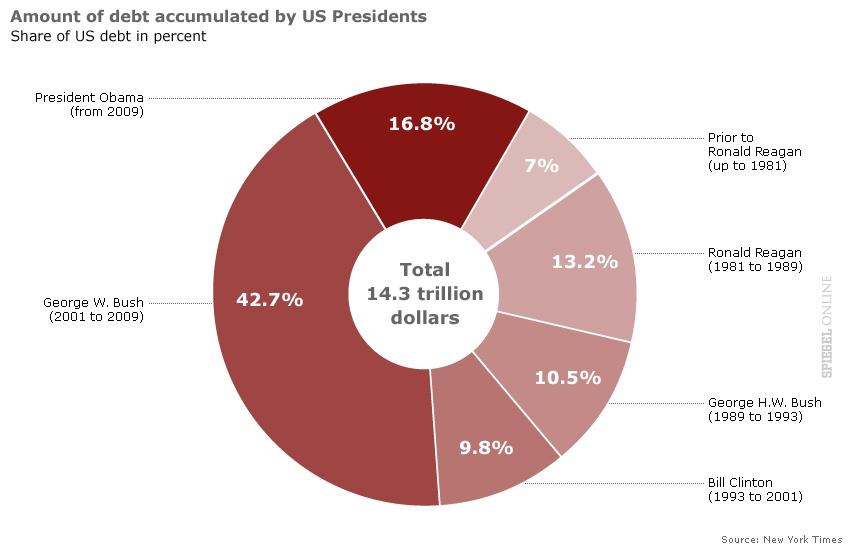 Yesterday a posting by Barry Ritholtz went viral over this chart posted at Spiegel. Barry writes:

"Its kinda funny — how come so few people (especially those on the right) were all that upset about the massive surge in debt under Bush? Is it that they only recently kinda figured out the significance of debt — or are they are merely hypocrites when it comes to this sort of thing?

Whatever your political or economic views are, it is not up to me to tell you what to believe. However, you need to be intellectually consistent and not merely grab whatever ideological bullet point that suits your purposes at the moment. If you do so, you best be prepared to be charged with being intellectually dishonest, and to be categorized as called a political hack. Or worse."

For the most part Barry has it right. People were not outraged during the Bush years because America was living far beyond its capacity as the bubble in creative finance blew to massive proportions. No one cared what the government was spending as long as we could buy a house with no money down, expand our credit lines, get "interest free financing" and get all of the "cool stuff" right now. No waiting, no hassles.

Why not? The media was stuffed with advertisements on living better lives, flipping houses, decorating, landscaping, motorcycles, cars, etc. If you wanted it - go ahead and get it. The financial community encouraged it. Alan Greenspan in 2004 promoted adjustable rate mortgages as a solution to put all Americans into a home. Gone were the days of living on less than you make and saving for your future. That was ridiculous sentiment as housing became the new savings vehicle and the bigger your house was, the better off you would be. It all sounds ridiculous now ... just not then.

Unfortunately, now that the bill has come due people don't want to pay the tab. However, this is not an issue that started under Bush. Clinton, who robbed social security of $2.1 Trillion to balance the budget and left it stacked with I.O.U.'s. Furthermore, he certainly didn't do anything during his administration to curtail deficit spending either and is directly responsible, along with Phil Graham and Larry Summers, for the repeal of Glass-Steagall which laid the groundwork for the financial collapse in 2008. Bush, Sr. certainly enjoyed the continuation of the deficit spending joyride that Reagan started during his tenure. However, this journey of massive debt accumulation is not something that can be achieved by the White House alone. It took a concerted effort of both Republican and Democrat, House and Senate, Federal Reserve and Treasury to create the problems that we face today. 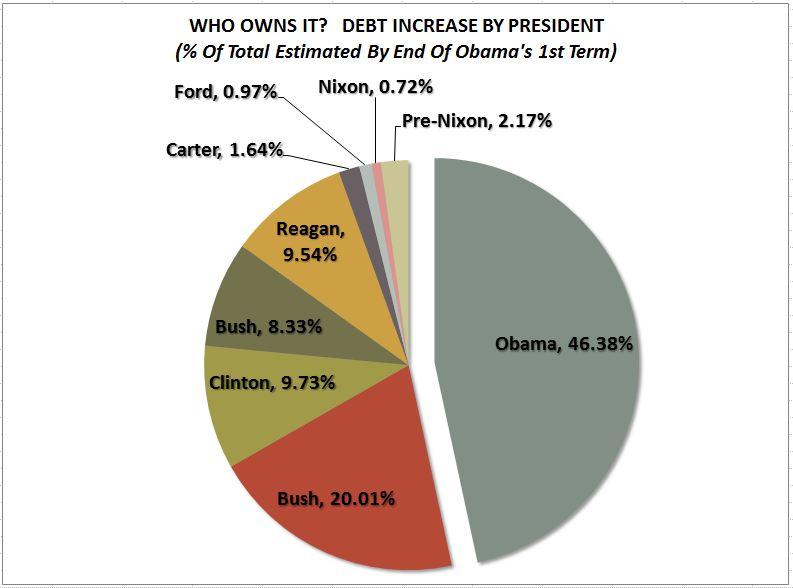 However, Spiegel's chart is incorrect. Using the data from the U.S. Treasury and looking at the amount of U.S. Debt subject to the statutory limit we can recalibrate the chart correctly as shown here. Bush did indeed massively expand the debt levels from $5.591 Trillion dollars when he entered office to $8.921 Trillion by the end of his second term for a 20.01% increase in the total amount of incurred by the U.S. Obama, during his first term will increase the debt from Bush's $8.921 Trillion to $16.638 Trillion by the end of his first term for an astounding 46.38% increase in the debt level.

Going back in history here is total, by president, of the increases in the total debt.

However, this is NOT the story. As my friend Doug Short stated during our discussion of this issue yesterday "The ranting and raving of the political right versus left on the subject of debt and spending is pretty much a dialogue between idiots." He is right. 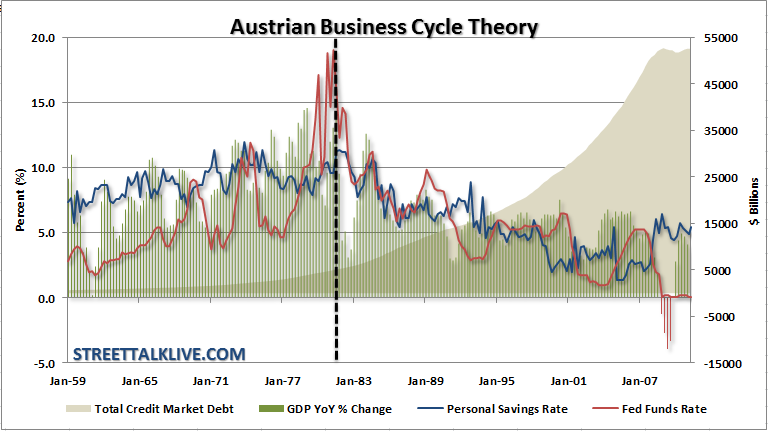 The real story is that we are all to blame in some part for the situation that we currently face today. As we have shown many times in past missives; the "debt super cycle" that began in the 1980's wasn't just a function of the parties in power. It was a party that we all participated in. Whether it was the administration and Congress setting the table, loose regulatory authority turning a blind eye, lobbyist bribing their way in or banks spiking the punch bowl; in the end no one forced the party goers to imbibe beyond excess. Yet, we gladly did. We all drank and drank deeply. We just don't like the hangover very much.

The Austrian economic school had it right. When you maintain low interest rates for far too long it creates as excessive credit boom that leads to the destruction of personal savings and malinvestment. Well, ladies and gentleman, here we are. Thirty years of excess has deteriorated economic growth as increases in debt has destroyed economic growth by diverting personal savings away from productive investment.

So, if you want to blame the current or past administrations for our spending and debt problems - they certainly deserve the blame. However, let's not forget that while they certainly threw a "helluva" party - no one forced us to party like there was no tomorrow. Unfortunately, this is one of those hangovers that won't be cured with a couple of aspirin and some "hair of the dog" but rather a lot of time and a thorough cleansing of the system before we start to feel better again.