Netflix (NASDAQ:NFLX) management tried to do the right thing, but they implemented their strategy incorrectly. Unfortunately, their classic mistake cannot be rectified. Worse, because Netflix is non-diversified, the costly error could put it on a course similar to Blockbuster (OTC:BLOAQ). 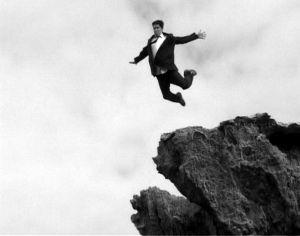 Here’s how they botched the company’s fabulous opportunity. (I am using a case example I know well to illustrate what went wrong.)

The problem/opportunity: A market shift from physical to electronic

In the mid-1970s, paper companies were trying to strategize how they would fit into the coming “paperless” economy. Electronic data storage was spreading, computer time-sharing was popular and Xerox Palo Alto Research Center (PARC) was developing the Ethernet. It was only a matter of time (it was thought) that paper usage in offices would decline.

For Netflix, the shift is similar: from physical video DVDs to electronic video streaming. With increasing broadband/speed, improved software and expanding content, it is only a matter of time (it is thought) that DVD usage in homes will decline.

The need: A company shift in direction

At International Paper (IP), where I was working, a major consulting firm was aiding management and developing a picture of where the company was and where it needed to head. The approach was twofold: First, to modernize by focusing on profitable growth areas (more about that later); and, second, to diversify (IP created IP Credit, which would become a major leasing firm, and they acquired General Crude as a non-paper, natural resource holding).

Netflix management responded quickly to its market shift, expanding its DVD rental business model to include video streaming. It makes sense: The same customer base dealing with the same firm, fulfilling the same need, but in a different format. (Blockbuster, with its physical retail locations, did not have the flexibility to make such market shift moves.)

The strategy: Getting from here to there

At IP, the consulting firm helped design the strategy to make the shift. Such a move not only has many moving pieces, it also has important cost/benefit considerations. A key schematic was put together, including the important information, yet simple enough for top management and, especially, board members to grasp. It plotted all of International Paper’s component businesses and markets, showing profitability, growth and size. Here is a mock-up, with two products that were especially relevant. 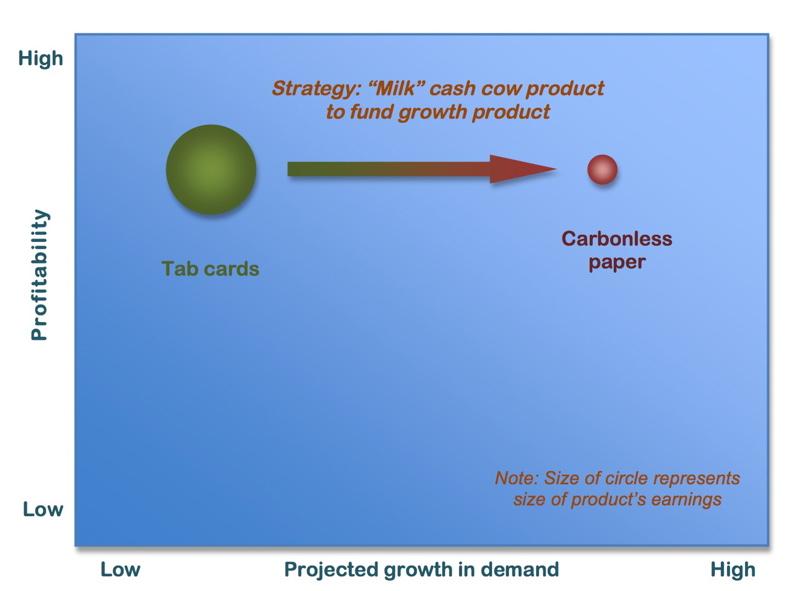 Tab cards, still in widespread use, eventually would be obsolete as new computers worked from electronically stored programs. Although other paper companies were getting out of the market, the consultant viewed the product’s profitability and size as a cash cow that could be milked to feed growth projects. Therefore, IP stayed in and fully supported the tab card customer base in spite of its negative growth.

Carbonless paper, on the other hand, was a new product, meeting the need for computerized forms that didn’t require paper separation. While profitable, it was a small market. However, the growth potential was viewed to be large, so IP invested in the business (it doubled the size of a major, modern mill, focusing on the marketing and production of carbonless paper).

Clearly, Netflix management has a reasonable view of DVD rentals (cash cow) and video streaming (growth market). However, they stumbled over the strategy.

Instead of fully supporting and keeping separate the DVD rental business, they added in video streaming, confusing customers and making the website a mishmash of “instant” vs. regular queues.

Worse, they added the streaming business for free. That set up expectations among customers (free!) that the company was not planning to fulfill. In addition, for those customers who preferred to stream, management had created an incentive for them to shift from physical to electronic sooner (by decreasing their plan level to fewer DVDs).

Then came the step of no return: The company’s announcement that the DVD rental + streaming price was going up significantly, that the Netflix brand name was only going to apply to the streaming service, that there would be two websites and that the divisions would require separate payments.

This announcement created significant incentives for customers to reconsider their decisions regarding Netflix. After seeing that monthly payment in their checking account statements and saying, “Someday, I need to look at that,” DVD renters decided "someday" had arrived. Moreover, the no-longer-free streaming encouraged people to check out alternatives. Naturally, the media had a field day, reminding people (and investors) of Blockbuster's reversals.

What about management’s “We’re sorry” letter and backing off the company split? Too little, too late. The outflow has begun, and, in this day and age of rapid change, there is no regaining lost ground.

Netflix made a major, irreversible mistake. The lost DVD rental revenues and customers cannot be regained. Have they made themselves the go-to place for video streaming? Probably not. They have lost their cachet, so are now among the multitude of firms trying to win in that area. (And then there is that Jobs-autobiography teaser of an amazing, new Apple TV viewing experience coming soon.)

So, is Netflix a short? I can’t say – I never short a stock. (Here is a writer who has been writing about the stock as a short.) It certainly doesn’t seem to be a good, long-term buy.