As most equity markets around the world remain sluggish, India-focused funds continue to perform in 2015, up an average of 6% year to date, and that's on the heels of an average 40% return in 2014.

Investor sentiment on India continues to be quite positive. Prime Minister Narendra Modi has made some progress on his reform agenda, which includes raising limits on foreign ownership in areas such as the insurance industry and proposing a new centralized business tax code that would greatly simplify a current patchwork structure that is controlled at the provincial level.

India also has benefited recently from lower oil prices. The country is a net importer of oil, so it has seen a decline in its current account deficit, as well as inflation. That, in turn, has allowed the Reserve Bank of India to adopt a more accommodative monetary policy to support economic growth. And relative to its emerging-markets peers, India's outlook is better. While China's economy slows and Brazil's teeters on the brink of recession, the International Monetary Fund estimates a healthy 7% growth rate for India's economy this fiscal year.

Historically, India equities have rallied on positive momentum to very lofty valuations. So while the MSCI India Index (a U.S. dollar-denominated market-cap-weighted index of companies listed in India) is currently trading at a trailing 12-month price/earnings ratio of 20 times, it has traded as high as 30 times. India also has a history of trading at a significant premium to the MSCI Emerging Markets Index. That said, a sudden upturn in oil prices would be a significant headwind for India's economic growth and could quickly deflate the country's equity markets. 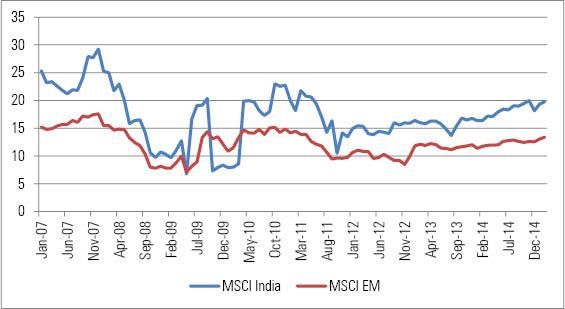 It almost goes without saying that India equities are very volatile. During the 2008 global financial crisis, the MSCI India Index fell 69%. India depends heavily on foreign fund flows for investment and growth. When markets are in a risk-off mode or when investors become concerned about a potential stall in economic reforms or a deterioration in macroeconomic fundamentals, foreign funds quickly flow out of Indian equities, which can quickly drive down share prices. These factors, combined with India's current account deficit, also drive volatility in the Indian rupee and, therefore, the returns of an India equity fund. These funds do not hedge their foreign-currency exposure, so their returns reflect both the change in value of the underlying assets as well as the change in the Indian rupee against the U.S. dollar.

Active vs. Passive in India
Within the India equity Morningstar Category, the five actively managed funds have on average outperformed the four passively managed funds (most of which are market-cap-weighted) on lower volatility during the past three- and five-year periods. Longer comparisons are not possible, as India exchange-traded funds have launched only in the last few years.

These time periods are short and the peer groups are small, so one cannot definitively conclude whether to go active or passive in India. During that time period, however, there were some consistent differences between the portfolios of actively managed and passively managed India funds.

First, most actively managed funds do not hold energy conglomerate Reliance Industries, one of India's largest public companies and therefore one of the largest holdings of the passively managed funds. Reliance has underperformed the broader market for a number of years because of delays on new production projects and below-average returns on invested capital. Second, actively managed funds have had larger weightings in Indian banks relative to the index, and those stocks have been performing well; they tend to have healthy balance sheets and direct exposure to India's growing middle class. Finally, in 2014, active fund managers had more exposure to and exhibited good stock selection among mid-cap companies, an area that typically accounts for a small allocation in passively managed funds.

The recent outperformance of actively managed funds over passively managed funds illustrates how in emerging markets, the largest companies may not always be good investments--these companies may be government-controlled entities or coddled firms in a protected sector. As such, a cap-weighted passive strategy may not be the best option, unlike in the United States, where the largest companies tend to be highly successful, well-run companies suitable for long-term investors.

Fund Options
Matthews India (MINDX). This fund employs the same stock-selection strategy as the other growth-oriented funds in Matthews' all-Asia lineup. Comanagers Sunil Asnani and Sharat Shroff pursue strong and sustainable growers that are selling at moderate valuations. They readily consider lesser-known and smaller-cap stocks, and they pay particular attention to firms that will benefit from the rising income levels in the region. Overall, this fund has regularly earned superior gains in rallies and has generally posted competitive results in sell-offs. As a result, this fund has the best returns in the small India equity category and has handily outpaced the MSCI India Index over the trailing three and five years and since opening in late 2005. This fund carries a Morningstar Analyst Rating of Bronze.

India Fund (IFN). Aberdeen Asset Management took over this closed-end fund's management in December 2011 and so far has produced solid results. During the last three years through February 2015, the fund has returned 15.0%, significantly outperforming the MSCI India Index's 9.2%. Most notably, in 2013, when the average ETF and open-end India equity fund lost 11%, this fund managed to stay positive, returning 0.4%. Hugh Young is the listed portfolio manager, and he is supported by four comanagers. Young is also the head of Aberdeen's Asia team. The portfolio-management team invests in quality companies that they know well, are growing, and have the leadership skill to manage that growth.

Exchange-Traded Funds. The returns of the four ETFs in the table below are quite different, reflecting differences in their weighting methodology. WisdomTree India Earnings (EPI) tracks an index that weights constituents by its prior year's earnings. The other three funds are free-float-adjusted and market-cap-weighted, but they employ different methodologies for calculating the constituent stocks' free float (to reflect foreign ownership limits). As a result, the ETFs can have slight differences in sector weights and returns. Investors who prefer an ETF structure for India exposure may want to chose a fund that is liquid and has a low expense ratio.