In a conference call yesterday morning, Elliot S. Kaye, Chairman of the U.S. Consumer Product Safety Commission (CPSC), made a statement about his agency's investigation of Lumber Liquidators and then took questions from reporters (the statement and audio of the 22-minute call are posted here).

I couldn't be more pleased with the call, both in what Chairman Kaye said as well as his general attitude and demeanor. He appeared to me to be thoughtful, fair-minded, determined to get to the truth, and very strong willed - importantly, he didn't strike me as someone who Lumber Liquidators and its representatives will be able to bully. I was also impressed with how quickly the CPSC is moving: in less than a month, it not only appears to be fully engaged, but is also coordinating with many other federal agencies, including:

That's an impressive line-up! Collectively, I think these agencies are likely to definitively show what I'm quite certain is true: that Lumber Liquidators' Chinese-made laminate flooring has high levels of formaldehyde and thus poses a serious health risk to consumers.

So why was the stock up more than 10% yesterday? In part, perhaps, relief that the CPSC didn't immediately force Lumber Liquidators to stop selling its toxic laminate (which was never in the cards - the CPSC needs to do its work before taking action), but mostly, I think, because Chairman Kaye said the CPSC's testing would not use deconstruction, which appears (at least to those blindingly accepting what the company is saying rather than doing solid, independent analysis) to confirm the company's claim that the testing methodology used by 60 Minutes, myself and others is "invalid." Nothing could be further from the truth.

The misunderstanding is due to Lumber Liquidators sowing confusion (no doubt deliberately) between measuring formaldehyde levels that Lumber Liquidators' customers are actually exposed to, which is what the CPSC cares about, vs. the standards set by the California Air Resources Board (CARB).

I believe there will be equally bad news for the company - a double whammy - when the CPSC completes its very different tests, called “exposure scenarios,” that seek to measure how much formaldehyde the buyers of Lumber Liquidators' Chinese-made laminate are actually being exposed to. This kind of test doesn’t involve deconstructing the laminate, so the fact that Chairman Kaye confirmed this fact on the call isn’t a bullish sign for Lumber Liquidators (contrary to what some investors and analysts concluded yesterday).

Ironically, while the company calls for "real-world" tests, in fact it hasn't done any exposure scenarios at all! Instead, it's just done tests of its finished laminate - but contrary to explicit CARB guidance, without deconstruction - yet nevertheless has taken these bogus results and proclaimed that its laminate is CARB 2-compliant. What mendacity and chutzpah!

Even more ironically, 60 Minutes, which Lumber Liquidators' founder and Chairman, Tom Sullivan, accused of "making up this story," actually did the exposure scenario tests that the CPSC will be doing - and the results were damning for the company, as all three tests showed levels of formaldehyde orders of magnitude higher than the acceptable exposure levels that have been established to protect Americans, especially children. For more on this, here’s an extended excerpt from my article, A Response to Lumber Liquidators:

Lumber Liquidators' second line of defense (implied by the company and made explicit by its defenders) is that, even if its laminate has levels of formaldehyde above the CARB limit, where's the harm?

For starters, read what the National Cancer Institute and the Centers for Disease Control and Prevention have to say about formaldehyde: it can cause "watery eyes; burning sensations in the eyes, nose, and throat; coughing; wheezing; nausea; and skin irritation," "upper respiratory tract irritation [that] can potentially exacerbate asthma symptoms and other respiratory illnesses," "chronic runny nose, chronic bronchitis, and obstructive lung disease," and is a "known human carcinogen" associated with "several cancers, including nasopharyngeal cancer and leukemia."

But at low levels, serious symptoms are unlikely - so the real question is, what is the actual, real-world level of formaldehyde Lumber Liquidators is exposing its customers to via its laminate and what harm might result from this?

The company, not surprisingly, says the level is very low, as shown in slide 16 of its presentation: 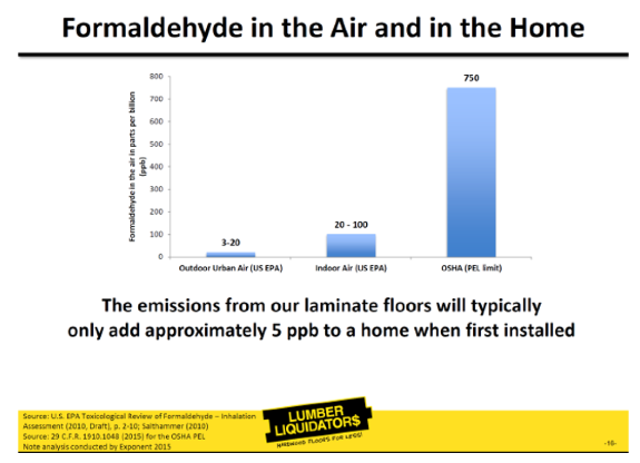 Lumber Liquidators claims that "The emissions from our laminate floors will typically only add approximately 5 ppb to a home when first installed." If true, this would be good news since regulators have set 7 ppb as the limit to protect everyone, including children.

But the company's claim flies in the face of the evidence. 60 Minutes (which, again, posted all of its test results here) hired a lab to test three samples of Lumber Liquidators' laminate, using the California Department of Public Health home model, which tests how much formaldehyde a typical homeowner would actually be exposed to. In sharp contrast to the company's claims, these tests showed the following levels:

In other words, the actual levels of formaldehyde were 11-54 times the levels claimed by Lumber Liquidators. Whose tests are you going to believe?

When 60 Minutes showed these results to Dr. Philip Landrigan, one of the world's leading experts on this subject (see his bio here and here), he said (according to the transcript):

Dr. Philip Landrigan: It's not a safe level, it's a level that the US EPA calls polluted indoor conditions.

Anderson Cooper: Would you want that in your home?

Dr. Philip Landrigan of N.Y.'s Mt. Sinai Hospital, specializes in environmental pediatrics and exposure to toxic chemicals. He's talking about the results of another kind of test Drury and Larson conducted measuring the concentration of formaldehyde emissions coming off the laminates into the air of a typical home.

Dr. Philip Landrigan: I would say long-term exposure at that level would be risky because it would increase the risk for chronic respiratory irritation, change in a person's lung function, increased risk of asthma. It's not going to produce symptoms in everyone but children will be the people most likely to show symptoms at that sort of level.

In light of these frightening risks, especially to children, it's little wonder why Lumber Liquidators is trying to understate its customers' actual exposure to formaldehyde.

The fact that a half dozen federal agencies are working together to aggressively investigate Lumber Liquidators is grim news for the company, as is the fact that we now know, after yesterday's call, that the company faces liability from two different types of tests: CARB's deconstructive test as well as the CPSC's exposure scenario test - both of which Lumber Liquidators' Chinese-made laminate flooring has already failed in spectacular fashion. When the regulators confirm this, I believe the company will face severe sanctions, penalties and contingent liabilities that will crush the stock, which is why it remains my largest short position by far.

Whitney Tilson
7.48K Followers
Whitney Tilson is the founder and CEO of Empire Financial Research, which aims to provide advice, commentary and in-depth research and analysis to help people around the world become better investors. In the year prior to launching Empire, he founded and ran Kase Learning, through which he taught a range of investing seminars around the world and hosted two conferences dedicated solely to short selling. Mr. Tilson founded and, for nearly two decades, ran Kase Capital Management, which managed three value-oriented hedge funds and two mutual funds. Mr. Tilson has co-authored two books, The Art of Value Investing: How the World's Best Investors Beat the Market (2013) and More Mortgage Meltdown: 6 Ways to Profit in These Bad Times (2009), was one of the authors of Poor Charlie’s Almanack, the definitive book on Berkshire Hathaway Vice Chairman Charlie Munger, and has written for Forbes, the Financial Times, Kiplinger’s, the Motley Fool and TheStreet.com. He was featured in two 60 Minutes segments in December 2008 about the housing crisis (which won an Emmy) and in March 2015 about Lumber Liquidators. He served for two years on the Board of Directors of Cutter & Buck, which designs and markets upscale sportswear, until the company was sold in early 2007. Mr. Tilson received an MBA with High Distinction from the Harvard Business School, where he was elected a Baker Scholar (top 5% of class), and graduated magnacumlaude from Harvard College, with a bachelor’s degree in Government. Mr. Tilson is an avid mountaineer – he has climbed Mt. Kilimanjaro, Mt. Blanc, the Matterhorn and the Eiger, and is currently training to climb the Nose of El Capitan. He also regularly competes in obstacle course races and is the two-time champion and all-time record holder in the 50+ age group at the 24-hour World’s Toughest Mudder, having completed 75 miles and nearly 300 obstacles in 2016. Mr. Tilson spent much of his childhood in Tanzania and Nicaragua (his parents are both educators, were among the first couples to meet and marry in the Peace Corps, and have retired in Kenya). Consequently, Mr. Tilson is involved with a number of charities focused on education reform and Africa. For his philanthropic work, he received the 2008 John C. Whitehead Social Enterprise Award from the Harvard Business School Club of Greater New York. He was a member (and, for two years, served as Chairman) of the Manhattan chapter of the Young Presidents’ Organization. Mr. Tilson lives in Manhattan with his wife of 26 years and their three daughters.
Follow