There are approximately 8,000 medical and diagnostic laboratories generating $55 billion in annual revenues. The industry is highly fragmented and competitive with thousands of independent labs, physician office labs, and hospital based labs. The industry’s two largest companies are Quest Diagnostics (DGX) and Laboratory Corp. of America (LH). Other publicly traded, but significantly smaller, competitors include Bio-Reference Laboratories (BRLI), Genomic Heath (GHDX), MEDTOX Scientific (MTOX), and Psychmedics (PMD). Through significant consolidation over the past decade, the majority of publicly traded labs have been acquired, primarily by Lab Corp and Quest.

Demand is linked to the number of people receiving medical treatment. The profitability of individual companies depends on efficient operations and good marketing. There are large economies of scale in the operation of medical labs, which can receive samples from a wide geographical area. Small medical labs can compete effectively by providing specialized analyses, or by serving geographical regions with few medical facilities.

Across the United States, medical laboratory accreditation and Clinical Laboratory Improvement Act (CLIA) compliance is getting tougher. This is a trend which affects every clinical laboratory and anatomic pathology medical group that must comply with CLIA and meet the accreditation requirements of the Medicare program.

The long term trends are very favorable for the diagnostic laboratories. All laboratories will benefit from volume increases due to both population growth and the baby boomer budge in the aging population; an increase in the number of tests per requisition; and an increase in esoteric/genomic tests which we see as a result of technological developments and the nascent trend to customize treatments. Taken together, these trends will accelerate revenue growth beyond single digits. We think that the expansion of health insurance coverage to millions of currently uninsured consumers will out way reduced reimbursement rates. The main beneficiaries of the trends will be the most cost efficient service providers. We also believe that consolidation will also accelerate as the small service providers will be less like to successfully compete. Economies of scale will be the determining factor on which companies survive, let alone prosper. The largest companies in this sector have the best prospects.

Bio-Reference laboratories, Inc. Bio-Reference Laboratories, Inc. (Bio-Reference) is engaged in providing laboratory testing services, to customers in the greater New York metropolitan area, as well as to customers in other states. It offers a range of chemical diagnostic tests, including blood and urine analysis, blood chemistry, hematology services, serology, radio-immuno analysis, toxicology (drug screening), pap smears, tissue pathology (biopsies) and other tissue analysis. As of October 31, 2010, it operated two clinical laboratories, one in Elmwood Park, New Jersey and one in Valley Cottage, New York, and an andrology laboratory in New York City; a cytogenetics testing laboratory located in Milford; a pathology laboratory in Poughkeepsie; a pathology laboratory in Clarksburg, and a genetics laboratory in Gaithersburg. The laboratory testing business consists of routine testing and esoteric testing. On March 2, 2010, the company completed the acquisition of Lenetix Medical Screening Laboratory, Inc. (Lenetix).

Genomic Health, Inc. Genomic Health, Inc. (Genomic Health) is a molecular diagnostics company focused on the development and global commercialization of genomic-based clinical laboratory services, which analyzes the underlying biology of cancer, allowing physicians and patients to make individualized treatment decisions. The company’s Oncotype DX platform utilizes genomic analysis in standard tumor pathology specimens to provide tumor-specific information, or the oncotype of a tumor. It offers the Oncotype DX breast cancer test as a clinical service, where it analyzes the expression levels of 21 genes in tumor tissue samples and provides physicians with a gene expression profile expressed as a single quantitative score, which it calls a Recurrence Score. The test also provides measurements of quantitative gene expression for estrogen receptor (ER), progesterone receptor (PR), and human epidermal growth factor receptor 2 (HER2), genes, which are used in the calculation of the Recurrence Score result.

Laboratory Corporation of America Laboratory Corporation of America Holdings is an independent clinical laboratory company in the United States. The company has a national network of 51 primary laboratories and over 1,700 patient service centers (PSCs) along with a network of branches and STAT laboratories, which are laboratories that have the ability to perform certain routine tests quickly and report the results to the physician immediately. Through its national network of laboratories, the company offers a range of clinical laboratory tests that are used by the medical profession in routine testing, patient diagnosis, and in the monitoring and treatment of disease. In addition, the company has developed specialty testing operations, such as oncology testing, human immunodeficiency virus (HIV) genotyping and phenotyping, diagnostic genetics and clinical trials.

Psychmedics Corp. Psychemedics Corporation (Psychemedics) provides testing services for the detection of abused substances through the analysis of hair samples. The company’s testing methods utilize a technology to perform radioimmunoassays on the hair sampled, with confirmation testing by mass spectrometry. The company’s primary application of its technology is as a testing service that analyzes hair samples for the presence of certain drugs of abuse. The company’s tests provide quantitative information that can indicate the approximate amount of drug ingested, as well as historical data, which can show a pattern of individual drug use over a period of time. This information is used by employers for both applicant and employee testing, as well as to physicians, treatment professionals, law enforcement agencies, school administrators, parents concerned about their children’s drug use and other individuals or entities engaged in any business where drug use is an issue.

The growth picture for BRLI is fairly robust with consistent growth in sales and earnings in both the short and long term. The big negative for BRLI is that it is not generating much free cash flow. The smaller companies GHDX, MTOX and PMD show good recent sales growth and explosive, unsustainable growth in net income. Each of these companies is hindered by low or non-existent free cash. Quest has low growth in sales and faces challenges in growing its net income. However, it reports strong free cash at $4.50/share plus pays a dividend of $0.40/share yielding 1.2%. Quest has a history of growing the dividend at the hefty rate of 25.8% per year.

Sales growth by itself does not create a profitable company. These profitability ratios give us a good idea how well each company turns sales into profits. We can see here that size often does matter. Both LH and DGX have long term average operating margins significantly better than the smaller companies. PMD’s high margins probably reflect the specialized nature of its product offering. Two metrics we think very important are ROIC and CFROI. PMD gives a strong performance as measured by these metrics and GHDX does very poorly. The bigger companies, LH and DGX do well when compared to their direct competitors and to the industry medians. BRLI will be a contender when it can grow its free cash. 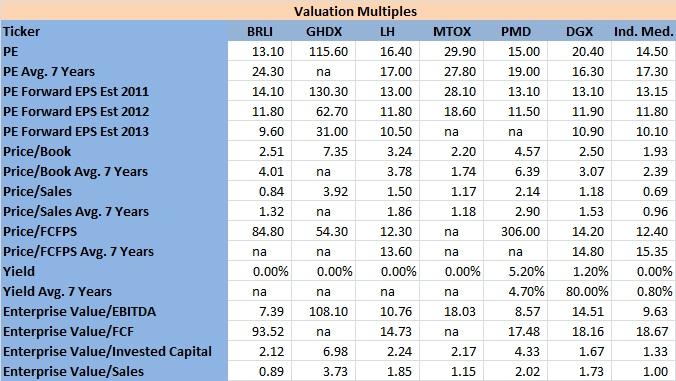 If we were either price momentum or earnings momentum investors, price would not be a critical factor in our analysis. If we were, perhaps GHDX would be of interest to us. Since we look for value, or at least a reasonable price, the purchase price becomes important. One metric that might be used to determine reasonableness of price is to look at PE to Dividend Adjusted EPS estimated Growth. On this basis, BRLI looks cheap at 0.7X; GHDX expensive at 2.4X; LH fairly valued at 1.4X; MEDTOX fairly valued at 1.5X; we have no long term EPS estimate for PMD; and, DGX slightly high at 1.6X.

Of the six companies described here, we think that Bio-Reference Laboratories offers the best risk/reward scenario. The company has $19.2 million in cash and ST investments and just $10.9 million in long term debt. It consistently grown sales and net income and maintains a stable operating margin. Valuation, as measured by PE, PB and PS are all below the company’s long term valuation levels.

Ron Sommer
750 Followers
Ron Sommer was a chief financial officer at an institution of higher education in New York City. He has 40 years of financial management experience in the public, private and not-for-profit sectors. Sommer has also been a private investor for more than 30 years. He uses a ruled-based quantitative model.