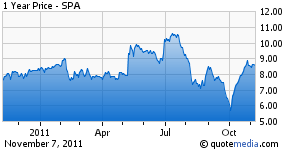 Sparton Corporation (NYSE:SPA) is now a $203MM LTM revenue company that designs, develops and manufactures complex electronic and electromechanical products and subassemblies (and provides related services) for the medical, military and aerospace, and industrial and instrumentation markets.

Strong Q4 FYE June 2011 results, announced a little over a month ago, show a company that continues positioning for both growth and higher margins in the future, with an upcoming Q1 earnings announcement and conference call this week. The upcoming results are sure to further confirm Sparton’s repositioning to sustained profitability by an outstanding turnaround team that has already proven itself capable of making tough cuts when, and if, necessary, as well as investments in both R&D and business development and highly accretive acquisitions.

At present prices, Sparton’s $88MM market valuation is less than 1.2X book with almost $23MM of net cash equal to over one-fourth of that market value. With sustained profitability, Sparton still is in a valuation catch-22, lacking meaningful analyst coverage (only Sidoti formally covering and B Riley informally commenting) and the trading liquidity and expanded price multiples that such coverage generates. Sparton has recently authorized its first stock buyback in many years.

For Q4, Sparton reported a $0.07/share net loss resulting from a $16.8MM of non-cash goodwill impairment and writedown on assets acquired by prior management in a 2006 medical segment acquisition. Absent this writedown, (as page 4-5 of Sparton's recent Q4 FY'11 earnings call slide show, also illustrate) Sparton would have reported $0.28/share pro-forma EPS for Q4. Also, stripping out prior year's one-time gain on sale of PP&E, Sparton's, "apples to apples" pro-forma "clean" June FY'11 of $0.64/share was 60% higher than $0.40/share pro-forma June FY'10.

Sparton Continues Positioning For Growth And At Higher Margins

Sparton is moving from a successful turnaround into a growth story with a stated vision as follows:

“... to become a $500 million enterprise by fiscal 2015 by attaining key market positions in our primary lines of business and through complementary and compatible acquisitions; and will consistently rank in the top half of our peer group in return on shareholder equity and return on net assets.”

Management’s vision of higher revenues at higher rates of returns involve transitioning Sparton from a traditionally defined "contract manufacturer" to a higher margin full service developer, designer and manufacturer of complex and sophisticated electromechanical devices. This transition is being achieved by a combination of fixing or divesting underperforming lines of business, making complementary and compatible acquisitions, and generating profitable organic growth.

As discussed, below, Sparton management has outlined and begun delivering on its plan by growing its two higher margin segments, DSS and Medical, while shrinking the low-margin Complex Systems segment into improved profitability to either earn an adequate return or eventually divest it.

After three years of consecutive quarterly operating losses and a liquidity crisis, my firm Lawndale Capital Management, launched a proxy fight in 2008 that successfully resulted in board and management changes in Winter 2008/Spring 2009. These changes, and almost complete replacement of former Sparton senior managers, led to substantial restructuring actions (and charges) during FYE June 2009 and part of FYE June 2010 that removed huge costs from Sparton’s operations, while jettisoning unprofitable contracts and shuttering grossly under-utilized and inefficient manufacturing capacity. (See also, “Sparton: Turnaround Team Returns Micro-Cap Manufacturer to Profitability” by Adam Sues) “Sparton: An Undiscovered Turnaround” by John Rolfe.) These improvements continued into FY June 2011 in Sparton’s lagging Complex Systems (formerly EMS) segment with gross margins rising to 10% in FY'11, up from only 4% in FY’10.

In addition to Sparton’s plan to improve the Medical segment’s market share within the in-vitro diagnostics market through geographic expansion and new and increased vertical offerings, the company has moved into the therapeutic device market, specifically targeting cardiology, orthopedic and surgical segments via two highly accretive acquisitions.

First, in August 2010, Sparton purchased the assets of Delphi Medical Systems, which meaningfully catapulted Sparton into the therapeutic device market, providing not only a new and diversified customer base but also expanding Sparton’s geographic reach into the western U.S. (For greater detail on this acquisition, see my article entitled, “Sparton: Delphi Medical Acquisition Should Be Highly Accretive”.) Most recently, in March 2011, Sparton acquired the assets of Byers Peak, another therapeutic device manufacturer located very near Sparton’s Delphi facility in Colorado, where the Byers Peak operations are being consolidated.

Q4 results clearly illustrate that these acquisitions have been and should continue to be nicely accretive. Slide 11 of Sparton's recent Q4 FY'11 earnings call slide show, show substantial gross margin improvement from 5.4% to 14.5% for Q4 ended June and from 3.5% to 13.3% for the full FYE June. With Byer’s Peak only acquired in March 2011, there should be additional year-over-year improvements coming from Delphi’s Colorado facility in Sparton’s Medical segment.

Over the last few years, Sparton has made meaningful new investments in sales and marketing and research and development to engage new customers as well as enhancing relationships with key existing customers that have included - in the Medical segment: Siemens Medical (SI), Fenwal and NuVasive (NUVA): in the DSS segment: the U.S. Navy, Northrop Grumman (NOC) and BAE Systems, and in the Complex Systems segment: Goodrich (GR), Raytheon (RTN), and Parker Hannifin (PH).

Slides 12 and 13 of Sparton's recent Q4 FY'11 earnings call slide show are quite helpful to understanding Sparton’s three prongs to achieve the growth targeted by managements ambitious vision, above.

Overcoming Bumps On The Path – Siemens' Move To Dual Sourcing

In the Q4 and FY'11 press release, Sparton disclosed that it had received notice from its large medical customer, Siemens, of Siemens’ plan to reduce its supply risks by adding another company to join Sparton in its chain. Siemens continues to be a Sparton customer and is not expected to even begin second sourcing its products until the December quarter at the earliest. In the Q4 conference call transcripts, Sparton’s management said the company would be able to offset potential revenue losses from Siemens’ dual sourcing with other incremental revenue in fiscal 2012.

They further supported this answering a conference call question asking whether maintained gross margin guidance for the medical segment included potentially lost Siemens' sales. They answered affirmatively and highlighted Siemens business is lower margin. Present backlog for medical was actually up vs. prior year so any headwinds from potential diminished revenues have not yet been encountered. The long lead time to add a second source will provide time for Sparton management to make any necessary cuts and production allocations to shorten and minimize this potential "bump" in Sparton's cash flow growth.

Bumps in the path can sometimes also turn into opportunities. For example, Sparton customer Goodrich has entered into an agreement to be acquired by United Technologies (UTX). UTX’s management is considered very forward thinking and, as such, has moved to outsource manufacturing more aggressively than Goodrich. Sparton should have an opportunity to expand its business opportunities with Goodrich’s new parent.

Assuming Sparton simply carries this past year’s improved profitability over to both the recently acquired Byer’s Peak and future planned acquisitions, while reaping modest benefits from its R&D and business development investments, any bump in the road from diminished sales to Siemens, discussed, above, will be fairly quickly filled, making the current market valuation of SPA a compelling risk/reward investment opportunity.

Disclosure: At time of writing, author and/or funds author manages hold a long position in this issuer and is a 13D filer. Author and the funds may buy or sell securities of this issuer at any time.


This article was written by

Andrew Shapiro
1.38K Followers
Andrew Shapiro is President of Lawndale Capital Management, an investment manager of small- and micro-cap activist hedge funds for over 29 years, one of the longest periods of experience deploying an activist/relational investment strategy today. In addition to leading Lawndale, Mr. Shapiro has also served as an Officer, Director, or Observer on many boards and debt and equity bankruptcy committees. He was most recently Chairman of the Official Equity Committee in the Premier Exhibitions/RMS Titanic bankruptcy. He also serves as Immediate Past Board Chair/President, Governance/Nominating Committee Chair and on the Investment Committee of the Mill Valley Library Foundation, on whose board he has served for many years and is a Board Member of the Jewish Sports Hall of Fame Northern California. Mr. Shapiro is a long-time member and Board Leadership Fellow of the National Association of Corporate Directors (NACD), a member of the Private Directors Association and, via Lawndale, an Associate Member of the Council of Institutional Investors (CII) for almost two decades. Mr. Shapiro has more than three decades of portfolio management and analytically varied experience from a number of buy-side positions, employing a rare combination of credit, legal, equity and workout skills. Prior to founding the Lawndale organization in 1992, Mr. Shapiro managed the workout and restructuring of large portfolios of high-yield bonds, distressed equities and risk arbitrage securities for the Belzberg family office, First City Capital. Before joining First City, Mr. Shapiro was involved in numerous corporate LBO and recapitalization transactions for Manufacturers Hanover Trust and the Spectrum Group, a private equity firm. Mr. Shapiro was selected to the NACD Directorship 100 in 2012, a list of the most influential leaders in the boardroom and corporate governance community. He is a frequent speaker on corporate governance, fiduciary duty and activist investing topics, including on panels for the Council of Institutional Investors, Corporate Directors Forum, Society For Corporate Governance, SEC Advisory Committee on Small Public Companies and the National Investor Relations Institute. Mr. Shapiro has been a faculty member of the corporate governance/director’s education programs of UCLA Anderson and the National Association of Corporate Directors and presents often at several other director education programs. In addition to being a Contributing Author to Seeking Alpha, Mr. Shapiro has received national recognition through feature articles, in Forbes, Barron’s, Institutional Investor and a Business Week article that labeled him “The Gary Cooper of Governance.” Mr. Shapiro received dual JD and MBA degrees from UCLA, where he was an Olin Fellow at the UCLA School of Law and a Venture Capital Fellow at the UCLA Anderson School of Management. Mr. Shapiro received a BS in Business Administration from UC Berkeley's Haas School of Business, where he periodically guest lectures. Mr. Shapiro started Lawndale’s funds in 1993 with only $188,000 under management and, through performance and additional capital, has grown the firm’s managed assets substantially. Lawndale applies a private equity approach through active and relational ownership of public company securities. In most investments, Lawndale plays a constructive relational role by collaboratively working with boards and management teams to help them achieve their strategic and operating goals. In other instances, Lawndale is a direct value-unlocking catalyst, utilizing a range of tools that include aggressively promoting improvements in a company's governance and operational structures, proxy actions, asserting shareowner’s legal rights and taking active roles in restructuring and buyout proposal negotiations.
Follow
20 Comments