Although stocks bounce around in random walk most of the time, they spend 7% of their time trending. Solar stocks have certainly been trending since late January. Solar stocks, as measured by the Guggenheim solar index (TAN), are up 43% year to date. 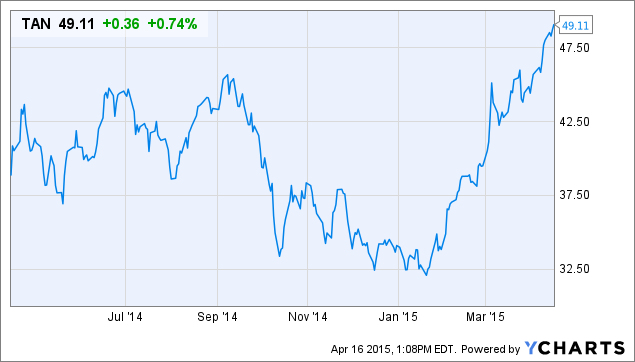 Trends in the solar sector are nothing new. Solar stocks trended lower beginning in 2011 as lower European feed-in-tariffs created industry oversupply problems. They trended higher in 2013 as that oversupply eventually solved itself.

How high can solar stocks trend?

Trending creates its own momentum, where buying leads to more buying. While the leading solar stocks have not reclaimed their 2011 highs, it may be only a matter of time before they do. Solar currently benefits from a number of tailwinds.

Third, although solar has successfully disassociated itself from crude oil, solar could benefit if crude prices continue to rise. As mentioned in this Bloomberg Businessweek article, crude's fall to the $60-$70 per barrel range postpones the mass adoption of renewables and peak demand by as much as 5 years. If crude prices rise above that level, however, mass renewable adoption could come earlier and generate higher revenues and profits for the solar sector.

In terms of long-term stocks to invest in, JinkoSolar and Canadian Solar are good bets. Both trade at forward PE's of ~8. If the two companies traded at the S&P 500's forward multiple of 17, their stocks would double. Given their cheap valuation, the upside catalyst of downstream listings in China, and their long-term growth potential, JinkoSolar and Canadian Solar will likely continue to rally.

The Panoramic View
627 Followers
The Panoramic View is dedicated to covering the latest developments in the market with a particular focus on dividend stocks and stock movements. PM for questions