We've been studying the work of Paul Krugman a bit lately, as he provides a nice focal point for debate on the current economic situation, he's controversial, and his blog provides a near real-time view of the man at work.

We've written in a lengthy article that we believe his model of the economy, which is a neo-Keynesian (or Hicksian IS-LM) view of the world is able to explain a number of present day economic phenomena.

Most notably, its Keynesian core provides explanations for:

Although his model of the economy is able to explain these phenomena pretty well, it doesn't mean that we're always agreeing with Krugman. We think he's wrong to attack the rising inequality only from a moral point of view. We think he underestimates the economic effects of increased inequality and we think he's going on about China just a bit too much.

The economic effects of rising inequality

Krugman, while strongly attacking the rising inequality from a moral point of view (everybody is entitled to his or her opinion..), doesn't see it having played much of a role (if any) in the crisis.

We beg to differ. There is a simple economic reality that savings is positively correlated to income. The higher the income, the more people tend to save. Since Krugman sees the crisis mainly as a lack in demand, one would expect him to see the rising inequality as a contributing factor, but he doesn't.

In reacting to Steve Waldman, who is arguing just that, Krugman contests:

But I have a problem with this one, for one simple reason: any such story, basically an underconsumptionist story, would seem to depend on the notion that rising inequality has led to rising savings. And you just don’t see that. Here’s private saving as a share of GDP. 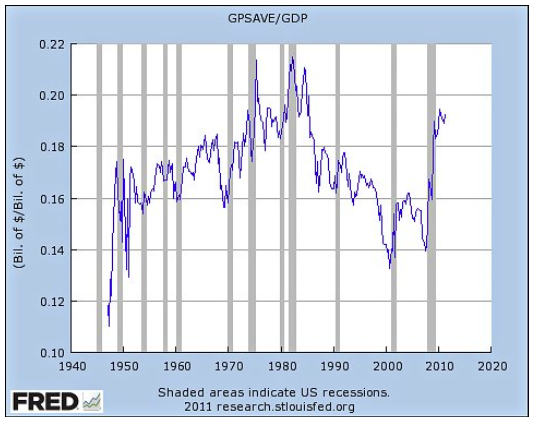 And indeed, savings haven't gone up (at least not until the financial crisis of 2008). Krugman then goes on to blame the trade deficit instead, and indeed again, there are reasons for that. A bigger trade deficit has the same effect as higher private sector surplus (savings minus investment)- both mean demand is moving away from domestic production.

Krugman then uses this to justify his harsh stand on China's supposed currency manipulation, with which we disagree for several reasons:

We also think Krugman is too fast to discard the economic role of rising inequality. If it hasn't led to a higher savings rate with income shifting disproportionally to the highest incomes, which tend to save more, could it be because middle and lower incomes have saved less, which taken together took agregate savings down? 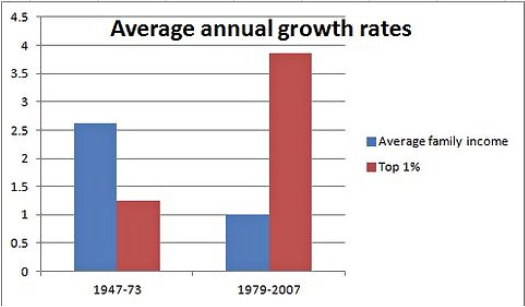 Could it be that they were eager to share in the wealth creation but could not sufficiently do so by wage increases alone (these were insufficient, see graph above), but instead started to spend their savings and borrow on the back of rising property values, made easy by cheap credit and financial deregulation?

We think there is a good deal in that. We now live the mirror image of that period of dissaving, balance sheets have to be repaired which explains why the recovery is so mute.

We think these two issues are quite important. An aggressive approach to China, which Krugman favours, can easily escalate and be hugely counterproductive. Dismissing the economic effects of rising inequality also closes the eyes for some solutions.

For instance, we've written about our surprise with the economic record of Argentina, which had the fastest growing economy in the Americas over the past 10 years while doing a lot wrong (it's quite market unfriendly, FDI unfriendly, foreign finance unfriendly, it has 30% inflation which is not reflected in the official figures, it mismanages the economy in many ways).

And contrary to what's usually reported in the press, the economic boom (8-9% growth per year) can hardly be ascribed to exports of commodities. The only way left to explain for that boom is that the domestic market was hugely expanded through redistribution, and a rather impressive reduction in poverty seems to testify to this.

Mind you, we're not making any moral judgement here, we're just trying to make sense of some curious economic figures. Something similar happened in Brazil as well. We're not optimistic about Argentina as the government is too market unfriendly (there is a rather impressive amount of capital flight going on, although that in part is a knee jerk reaction to Argentina's history).

But we do think both countries show that some redistribution can have positive economic effects. It could be that this by itself means little for the US, which might be sufficiently different. But to dismiss it out of hand because aggregate savings have not risen with rising inequality, as Krugman has done, seems unwise to us.

If higher incomes save more than lower incomes, redistribution will have a positive demand effect, simple as that. And demand is mainly what is lacking in the economy.