The Hera Research Newsletter is pleased to present an incredibly powerful interview with Keith Neumeyer, Chief Executive Officer, President and Director of First Majestic Silver Corp. (AG). Mr. Neumeyer began his career at the Vancouver Stock Exchange and worked in the investment community for 26 years beginning his career in a series of Canadian national brokerage firms including McLeod Young Weir (now Scotia McLeod), then Richardson Greenshields and then Walwyn Stogell McCuthchen (which became Midland Walwyn).

Mr. Neumeyer moved on to work with several publically traded companies in the natural resource and high technology sectors. His roles have included senior management positions and directorships in the areas of finance, business development, strategic planning and corporate restructuring. Mr. Neumeyer, who has listed a number of companies on the Toronto Stock Exchange, has extensive experience dealing with financial, regulatory, legal and accounting issues.

Hera Research Newsletter (HRN): Thank you for joining us today. Let’s begin by talking about silver supply and demand.

Keith Neumeyer: Silver mine production was around 736 million ounces in 2010. Demand was around 1 billion ounces. Scrap silver recycling and some government sales filled the gap. We’re at historic lows in terms of above ground silver. Eric Sprott recently said there are 1 billion ounces of triple nine silver left aboveground. Unlike gold, silver gets used. We’re at historic highs in supply when it comes to gold, but the exact opposite is true for silver. 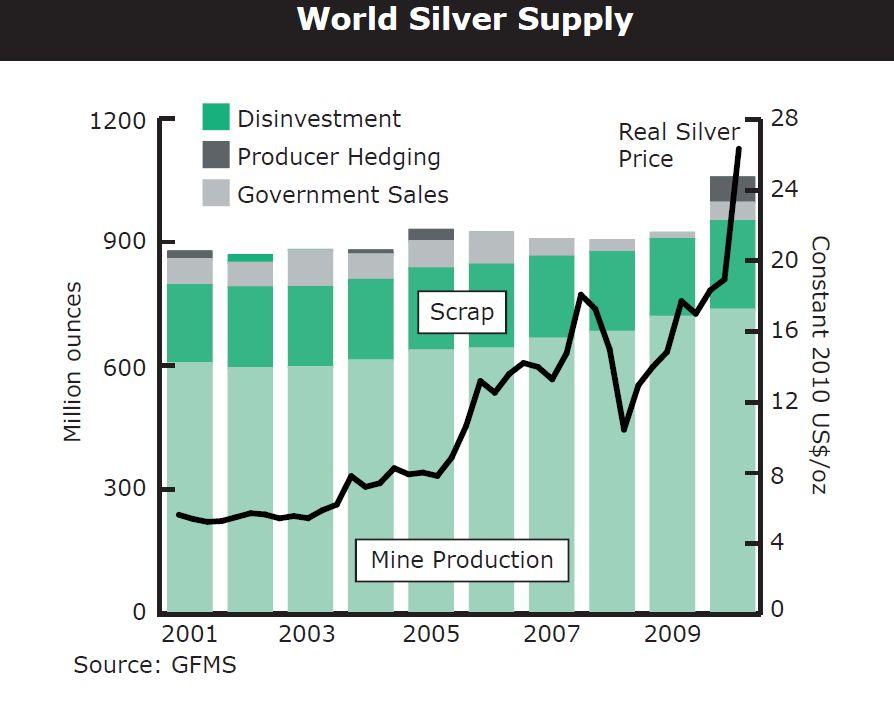 HRN: Is there a deficit in terms of mine supply?

Keith Neumeyer: We’ve had a supply deficit for the past 13 years. 2009 was the first year we created equilibrium. We only went into a surplus in 2010, in terms of industrial and jewelry fabrication demand. The surplus mine supply was purchased by investors, obviously. A lot of mining companies are showing lower production because a lot of silver comes from base metals and, with lower base metals prices, it’s becoming more difficult. I don’t see any major supply drivers for silver in the next several years.

HRN: Do you expect more scrap silver to enter the market?

Keith Neumeyer: That’s what happened in 2009 when gold rallied over $1,200 and then corrected to below $1,100. It was primarily caused by scrap gold entering the market. I believe the same thing was happening for silver. We’ll see that again as the metals make new highs. It’s the same as a stock. You replace part of the shareholder base at different levels.

HRN: Are you optimistic about future demand?

Keith Neumeyer: Yes, I’ve been optimistic about silver since 2002 because silver is a strategic metal. I think it’s more important than gold.

HRN: Are there new applications that could increase demand?

Keith Neumeyer: We’re seeing all kinds of new applications. A recent report by Barclays forecast that 120 million ounces of silver will be used for solar power generation in 2012 versus 40 million ounces in 2009. The battery industry is growing as well. Zinc-silver batteries provide very stable capacity — their output doesn’t degrade like lithium batteries — and they deliver 40% more energy compared to nickel metal-hydride batteries. They’re safer than water-based chemical batteries because they don’t heat up or explode. They’re also mercury free and 95% recyclable. Lithium-ion batteries in cell phones, for example, need to be replaced after 12 to 18 months. I’m very optimistic about battery technology. There are also robotics and other applications on the horizon. 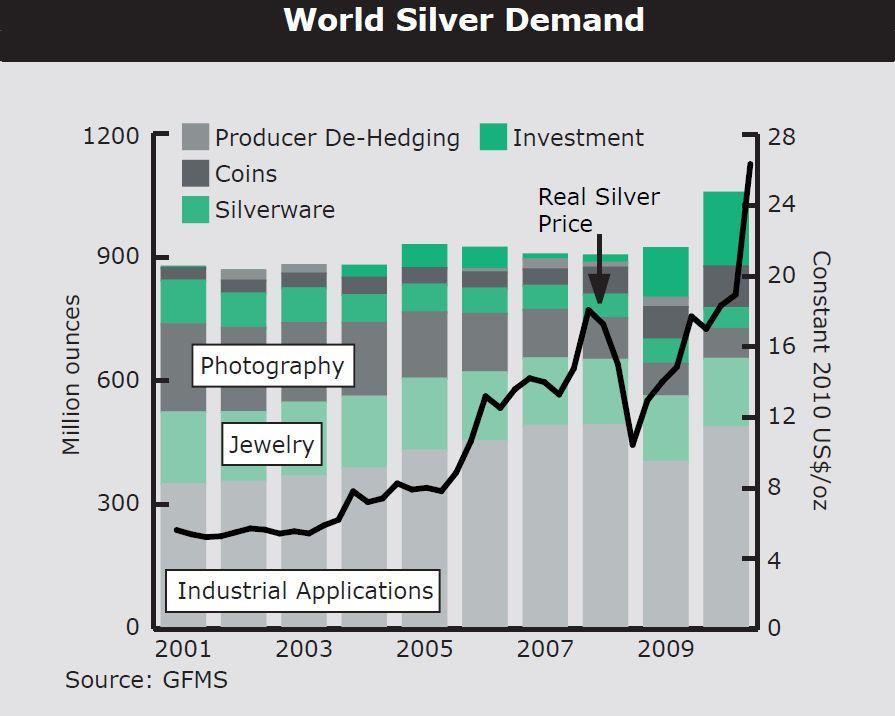 Keith Neumeyer: Silver will reach a value based on its natural ratio of 15:1 with gold. I expect to see at least $2,000 gold and most likely $3,000 in the next 3 to 5 years, so silver will be between $130 and $200. It’s a big number from where we are today but that’s where I think we’re headed. We’re dealing with a market that needs to be corrected.

HRN: Isn’t the price of silver set by supply and demand?

Keith Neumeyer: I don’t think supply and demand has anything to do with the price, unfortunately. The world we live in today is a paper environment where silver is priced by financial circumstances. Banks, traders and investors around the world move markets to where they want them to be. Governments and commercials — big banks like HSBC and JP Morgan — all have a piece of the action. They alternately work together or sometimes against each other. All these forces price the metal. That’s one reason we’re seeing the volatility that we’re seeing today. 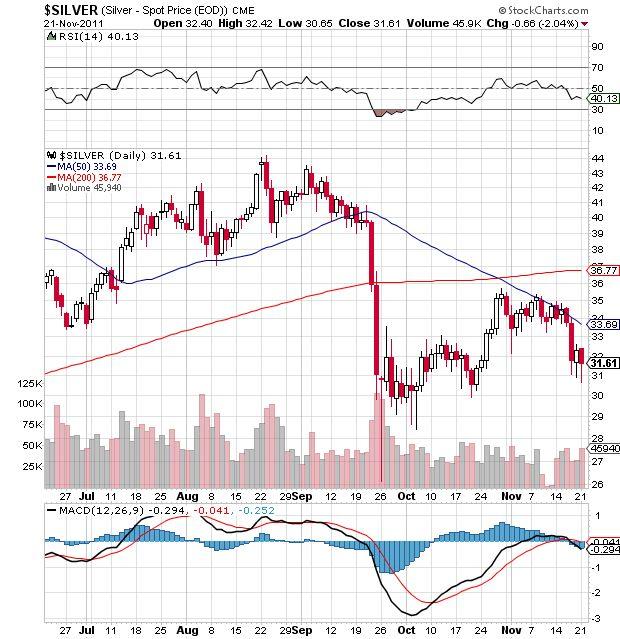 HRN: How can supply and demand be irrelevant?

Keith Neumeyer: In short term trading, the price is financially driven. Eventually, markets do correct themselves over time. In the long run, supply and demand does have influence. That’s why the price will ultimately return to its natural ratio of 15:1.

HRN: How is the price of silver financially driven?

Keith Neumeyer: It has to do with the financial instruments that we trade in and with the fact that silver trades a billion ounces per day on the COMEX alone when there are 26 to 30 million ounces of silver available for delivery. With that kind of leverage, you just don’t have a proper market.

HRN: It has been reported that there are 100 ounces under contract for every ounce in the COMEX warehouse.

Keith Neumeyer: The governments, regulators and bullion banks have let the silver market get more and more leveraged. We’ve seen a lot of wealth destruction as a result of this leverage and we’re going to see a lot more until, finally, the governments decide to change the system.

Keith Neumeyer: I don’t buy the argument on margin hikes at all.

Keith Neumeyer: It’s not up to them to decide what is parabolic. They’re not investors themselves. They don’t have money in the market. They decide a bubble is going to happen if they don’t raise margins but no one knows when a bubble is forming. It is only apparent after it’s already happened. By hiking the margins, they create the appearance of a bubble bursting. They create the bubble. They create the proof that it was a bubble. If they let it alone, the market would stabilize by itself.

HRN: What should the Commodities and Futures Trading Commission (CFTC) do?

HRN: Are you saying that the CFTC does nothing while the COMEX caters to banks and brokerage firms?

Keith Neumeyer: No. Absolutely not.

HRN: Do you foresee a return to a free market in the future?

Keith Neumeyer: I’m an optimist. I believe one day that governments will rewrite the rules and force the regulators to protect investors. That’s where we were back in the ‘70s and that’s where I think we have to be again to correct the problems that have arisen over the past 40 years. Silver is being revalued. It’s going to affect a lot of people along the way and it will change the financial system. Ultimately, we’re going to have a new financial system and, hopefully, we’ll go back to natural markets, completely driven by supply and demand. It may take another 20 years but I think it will happen.

Keith Neumeyer: If I’m wrong, the banks will run the world, even more so than they do today, 10 or 20 years from now. God forbid that we ever get there because that’s a one currency, one government world that would absolutely be a disaster for the human race. There would be no freedoms at all to move or to invest. It would be like having shackles on our ankles. There is a movement to go in that direction, unfortunately. There are a number of very wealthy people that want to see that. I hope that we can find the politicians to prevent that type of world from coming to pass.

HRN: Thank you for your time and for your candor.

Keith Neumeyer: It was a pleasure.

Disclosure: I am long AG.

Ron Hera
530 Followers
Ron Hera, founder of Hera Research, LLC, is a self described "escapee" from Silicon Valley, CA is a serial entrepreneur and private investor focused on research and analysis related to resources and hard assets. Mr. Hera, who holds a master's degree from Stanford University and who is a member of Mensa, consults for investors and resource companies as well as on special research projects.