We believe Ball's (BLL) strategy to expand its worldwide beverage can business as well as its aerospace business and use most of its free cash flow to repurchase shares should enable the company to post solid earnings per share growth in the next few years.

The market has driven down Ball's stock price to roughly 85% of our fair value estimate. Given the company's narrow economic moat, opportunities for long-term growth, and disciplined approach to capital allocation, we believe the stock is attractively priced at this level--about 10 times our estimate for 2012 earnings and about a 10% free cash flow yield.

Ball is the world's largest producer of metal beverage cans. During 2010, Ball produced 43 billion beverage cans for sale in the United States, Canada, and Brazil, more than 15 billion cans for Europe, and 4.5 billion cans for China. Producing this many cans permits Ball's beverage plants to achieve high levels of efficiency. The plants typically run 24 hours a day and are close to large-scale bottlers and brewers, which minimizes transportation costs. For example, Ball's Milwaukee beverage can plant is just a hop, skip, and jump from Miller's brewery. Its Golden, Colo. beverage can plant sends much of its output to the local Coors brewery.

The global beverage can market is a rational oligopoly. The industry is dominated by three players (Ball, Rexam (OTCQX:REXMY), and Crown Holdings (CCK)) that tend to lock their customers into multiyear contracts with cost pass-through provisions. We believe that in the developed markets of North America and Western Europe, Ball's established manufacturing footprint and long-term customer contracts create high switching costs, which help to fortify the company's economic moat. Longer term, however, the company could be subject to substitution risk as glass or plastic bottles may become more prevalent choices for beverage packaging.

While we believe metal beverage cans will face competition in developed markets, emerging countries are ripe for expansion for the entire packed goods industry in the medium term. As consumers earn more money, they will consume more packaged goods; hence, the demand for all forms of beverage packaging in countries like China and Brazil should have many years of growth ahead. Demand for beer, soda, and noncarbonated packaged drinks is highly correlated with per capita GDP. In the coming decade, as the emerging economies of Asia and South America grow, companies like Ball will be ready to provide packaging to the local bottlers and brewers. 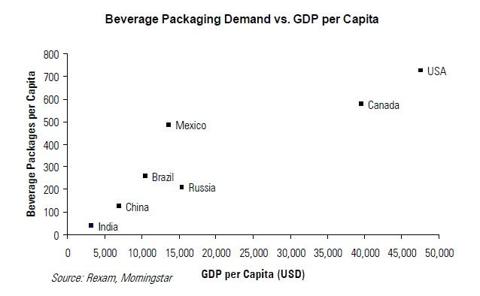 We believe the increased consolidation of the global beer market should benefit global packaging companies like Ball as well. Over the past decade, companies such as Anheuser Busch-Inbev (BUD) and SABMiller (OTCPK:SBMRY) ave been creating global empires via mergers and acquisitions. These behemoths appreciate the global scale, quality, and reliability that a company like Ball can provide.

Ball expects that through 2020, global beverage can demand will grow 4% annually, from 280 billion cans per year to 400 billion cans per year, and most of the growth will come from Asia. Ball believes that should the penetration of Chinese beer packaged in metal cans increase from 5% today to 10% by 2020, it would need to add 30 beverage can lines in China. Consequently, we expect the firm to regularly invest capital expenditures in these emerging markets; if demand in North America is outpaced by supply, Ball may repurpose some of its underutilized manufacturing assets overseas.

Innovations in the beverage can market can help to drive higher margins. Although the beverage can has been around for decades, Ball is still finding ways to innovate on the package in order to drive greater product differentiation for consumers and higher profit margins for investors. While the standard 12-ounce can is a bedrock packaging choice in the beverage market, it is a low-cost, low-margin business that is slightly declining in the U.S. Recognizing this, Ball has worked to increase its product portfolio with innovative solutions for bottlers and brewers. For example, Ball's aluminum beverage bottle has been seeing robust demand growth; consequently, the company is installing additional capacity at its Boulder facility. Additional innovative enhancements that Ball has already rolled out include color-changing inks that morph with temperature (for example, Coors beer cans have blue mountains that appear once the cans are sufficiently cold) and tactile printing that make the can feel unique. Finally, Ball has recently created sophisticated printing technology that allows for much greater resolution on a can in order to provide a better canvas for marketers to promote their beverages.

The bulk of Ball's revenue and profits comes from metal packaging. Beverage cans account for roughly three fourths of Ball's business, and metal containers used for food or household products deliver about one sixth of the top line. Meanwhile, the company's aerospace segment delivers less than 10% of overall sales, but it has been consistently profitable and currently enjoys a healthy backlog and flexible cost structure.

The aerospace segment, which manufactures satellites, sensors, antennas, and other equipment, derives more than 90% of its revenue from the U.S. government. In the medium term, budget deficits and a likely reduction in military spending could put pressure on some of Ball's funding sources. Consequently, the firm is looking to capture future revenue growth from other channels such as cybersecurity, commercial space, and the international market.

While the aerospace segment does not share any synergies with the metal packaging business, it is Ball's oldest operating unit and frequently delivers the company's highest returns on invested capital. We believe this history, combined with excellent returns, fortifies management's decision to continue operating both business units under the same umbrella.

Ball's incentive compensation scheme properly aligns management's compensation with shareholders' interests, in our view; bonuses are paid only if the company's economic value added surpasses the target. The CEO's and CFO's long-term incentives are linked to total shareholder returns and returns on average invested capital over a three-year period. Also, Ball's directors, employees, and named executive officers own more than 10% of the company's stock. Given that the leadership team's upside is well aligned with the interests of ordinary Ball shareholders, we believe the firm will continue to be a disciplined allocator of capital and continue to work in investors' best interests.

Ball has a solid history of generating strong free cash flows and is likely to use future cash flows to expand its business and return value to shareholders. Over the past decade, Ball has generated $3.4 billion of free cash flow (cash from operations less capital expenditures). Likewise, we expect Ball will continue to be a prodigious generator of cash in the coming decade. We believe the firm will use much of its cash to open new beverage can lines in South America and Asia, make occasional acquisitions, and buy back shares.

Morningstar
4.77K Followers
Independent. Insightful. Trusted. Morningstar provides stock market analysis; equity, mutual fund, and ETF research, ratings, and picks; portfolio tools; and option, hedge fund, IRA, 401k, and 529 plan research. Our reliable data and analysis can help both experienced enthusiasts and newcomers.
Follow
To ensure this doesn’t happen in the future, please enable Javascript and cookies in your browser.
Is this happening to you frequently? Please report it on our feedback forum.
If you have an ad-blocker enabled you may be blocked from proceeding. Please disable your ad-blocker and refresh.